Marijuana is still illegal in Mississippi, but that hasn't stopped some businesses in Columbus from marketing cannabis-infused products with cannabidiol -- also known as "CBD."

A sign in a glass case in NuWay Vape on Highway 45 claims CBD products will be available soon.

They're also available by special order at The Tobacco Warehouse, though you won't find them on the shelves.

The Texaco just off Hospital Drive sells CBD-infused gummy bears in a package of less than 10 for more than $15.

And a quick search on Google or Amazon for any of the products will turn up products from hemp oil to doggy treats, all advertising THC-free products with the same relaxing effects of marijuana without the high -- or the illegality.

"The THC is the ingredient that makes marijuana illegal, and the cannabis oil illegal and all that illegal," said Capt. Archie Williams, commander of the Lowndes County Sheriff's Office drug task force. "If it's THC-free, then it would have to be legal."

The CBD-infused products aren't even on Williams' or his team's radar, he said.

Despite its close association with marijuana, CBD actually comes from the different but closely related plant, hemp, which, unlike marijuana plants, doesn't contain high levels of THC, according to Dr. Robert Cox, director of the Poison Control Center at University of Mississippi Medical Center.

"CBD is an oil from hemp plants," Cox said. "... It's the same species of plant (as marijuana), but they've been bred over the years. Hemp has been used for a long time to make fabrics and robe. It looks like marijuana plants ... but it has a low amount of THC in it."

"Since that time, they've sort of refined the process of making the hemp seed oil, supposedly, and there's a lot less in there," Cox said. "Canada has been really big in pushing this and they sort of set a limit in no more than 0.3 percent THC in any product."

With the THC problem out of the way, the products have become more popular, with sellers claiming benefits from "relaxation" to treating seizures. Ron DeWitt, who manages the company B&R Enterprises, which provides tobacco products to businesses, began selling them this year.

"We had a lot of people ask us about it last year and wanted to know if we could get it," DeWitt said. "We started carrying it, and then we started getting orders."

Of the 200 plus clients B&R Enterprises serves, they probably provide CBD products to half of them, DeWitt said -- including Tobacco Warehouse in Columbus.

DeWitt himself doesn't use the products -- he's "not into that", he said -- but some of his clients are enthusiastic about them.

"We have one customer call today because she's got multiple sclerosis ... and it tends to help her with her problem," he said. "So I'm shipping her some tomorrow."

But Cox is less willing to swear by the product.

CBD oil contains Omega-3 fatty acids, which are also found in things like fish oil, canola oil and similar products, Cox said. The acids are thought to cause some health benefits -- there are claims that they lower bad cholesterol or have anti-inflammatory properties, Cox said.

But there are no scientific studies showing CBD to have any particularly relaxing properties or anything else significantly healthier than canola oil, Cox said.

It's also pretty typical of the supplement industry to push health benefits to their products, he said.

"All you have to do is get on the internet," he said. "Any vitamin, 'Oh, it'll do this, this, this and this.' One of the hemp things I saw, they said, 'Oh, there's been 23,000 studies showing the benefits of this.' ... What they're really talking about is, getting way back to the benefits of the Omega fatty acids. Those are your fish oil supplements, grape seed oil ... All of them have various amounts of Omega-3 and Omega-6 acids."

Potentially unluckily for the manufacturers, the Food and Drug Administration can step in when companies tout health benefits of a supplement.

"They can't stop them from producing the stuff unless someone shows it's harmful," Cox said. "But they can stop them from advertising health benefits if those have not been proven."

According to the FDA's website, the administration issued eight warning letters to manufacturers in California, Texas, Missouri, Utah and Oklahoma claiming their products contained CBD back in February 2016. Many of the products -- which included several different types of hemp oil, along with "Hermosa Farm CannaHoney" and "Strawberry Jam CBD Oil" -- did not contain the levels of CBD they claimed to have had. That said, none of them had THC levels of more than 0.3 percent either.

A package of CBD-infused gummy bears from the Texaco on Highway 45 and Hospital Drive promises to relax whoever takes them and even says not to drive or take more than two pieces every six hours. Cox said that may be due to the other ingredients the package lists, which include alcohol and melatonin.

"If you've got a little bit of alcohol and some melatonin, sure it would probably relax you," he said. "Is it the (CBD) doing that? Probably not."

"So as far as the benefits of people taking those, there is no harm that we know of," he said. "The benefit is no different than any other health food supplement that people are getting and trying to eat." 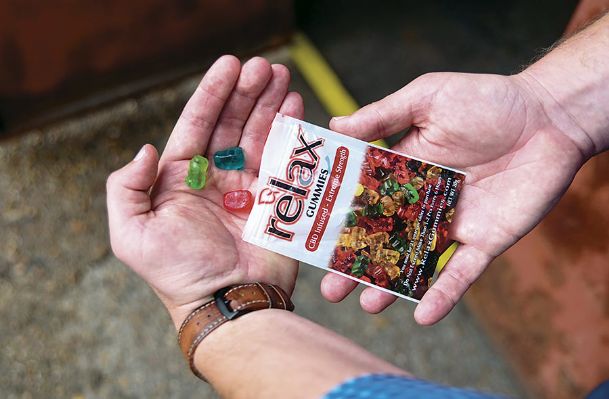 Exploring The Health And Wellness Benefits Of Hemp-Based CBD Oil

Is CBD Oil The Same As Hemp Oil In Food