Legislation that would authorize the University of Minnesota to perform agricultural or academic research on hemp is moving through the state Capitol this session, gaining support from some faculty members. Rep. Phyllis Kahn, DFL-Minneapolis, is sponsoring a bill that would authorize higher education institutions to perform industrial hemp research by allowing the Commissioner of Agriculture to administer the growth and cultivation of the crop through a pilot program. Plant biology professor David Marks said the College of Biological Sciences is currently restricted to industrial hemp research in a small-scale growth facility and that the state's legal restrictions make it challenging to study. "There's all kinds of different possibilities," Marks said. "The door would be opened if we could grow more plants."

He said that if the University would make larger-scale hemp research legal, researchers would study genetic mutations of the industrial crop and study new uses. Research funding would also be more accessible then, Marks said. Due to provisions in the recently passed federal farm bill that allows academic researchers to cultivate industrial hemp, Kahn said support for the proposal this session is strong. Individual states need to pass laws for the research to be legal in respective areas. If Minnesota made it legal, Kahn said, industrial hemp research would benefit the economy because of the high demand for the crop's oil, seed and fiber used in pharmaceuticals, foods and building materials.

Currently, Minnesota manufacturers process hemp into various products by importing the raw crop from Canada or China, where growth is legal. But opponents of the bill say that by loosening the restrictions to grow hemp, people who are allowed permits could potentially grow illegal marijuana on the plots, Kahn said. Because people with the licenses would be required to disclose the location of their plots, Kahn said, law enforcement would be able to easily track any illegal growth. Marks said that the argument is flawed because cross-pollinating the two types spoils the marijuana crop and industrial hemp contains fewer mind-altering ingredients than marijuana.

The plant biology department is exploring the genetic differences between industrial hemp and marijuana by looking at the crops' levels of tetrahydrocannabinol, a mind-altering ingredient, he said. According to the bill text, only 0.3 percent of THC, the active ingredient in marijuana, would be allowed in the industrial hemp. The average THC concentration in marijuana is 1 to 5 percent. "The main thing about hemp is that it doesn't contain enough tetrahydrocannabinol to be considered a drug," Marks said.

Regardless of its lower levels of THC, the Department of Justice currently views hemp the same as marijuana, Marks said. Thom Petersen, a representative of the Minnesota Farmers Union, said to a House committee meeting Friday that if the bill passes, farmers could benefit financially because hemp is a highly valued crop. Currently, North Dakota State University is allowed to import and resell industrial hemp seed, and any resident is allowed to grow the crop if it meets certain stipulations, according to a state statute. Legislators will review the proposal in the Ways and Means Committee in the coming weeks, but an official date for a hearing hasn't been set yet. A Senate version of the bill is gaining traction as well. 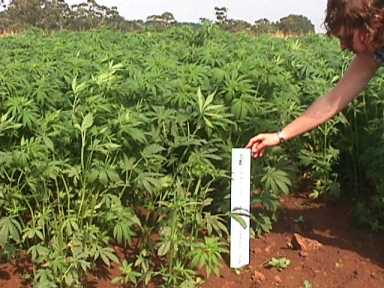