Some of the imported hemp seeds detained by U.S. customs officials in the spring turned into 10-foot-tall plants that were harvested Tuesday on a research plot in Kentucky, where marijuana's non-intoxicating cousin has gained a foothold as a potential cash crop. A sickle bar mower pulled by a tractor made half a dozen swaths to cut the hemp patch at the University of Kentucky research farm. Farmers wanting to learn more about the crop were among the curious who posed for pictures while holding long, leafy stalks. "There's a great possibility that it could become a viable crop in Kentucky," said UK agronomist David Williams, who helped oversee the research plot. "It's not the most complicated plant to grow for farmers. I think they would pick up on it immediately with very little guidance."

FROM CONFINEMENT TO FARM
Hemp's reintroduction was delayed in the spring when hemp seeds imported from Italy were detained by U.S. customs officials in Louisville. The state's Agriculture Department sued the federal government, and the seeds were released after federal drug officials approved a permit. Part of the once-detained shipment ended up being planted May 27 at the UK plot. Half a dozen universities and about 12 farmers were involved in this year's test plantings, on a total of about 15 acres on plots across the state.

HEMP'S FAMILY TIES
The crop once thrived in Kentucky, but growing hemp without a federal permit was banned in 1970 because of its classification as a controlled substance related to marijuana. Hemp and marijuana are the same species, but hemp has a negligible amount of THC, the psychoactive compound that gives marijuana users a high. Hemp's comeback started with the new federal farm bill. It allows state agriculture departments to designate hemp pilot projects for research and development in states such as Kentucky that allow hemp growing. A thief apparently got the two confused. Some hemp plants were stolen during the night last week from an eastern Kentucky plot. "You can't use it to get high," said Adam Watson, the state Agriculture Department's hemp program coordinator. "So we expect it's kind of a case of mistaken identity."

EASY GROWTH
UK's test plot grew fast, with little help from researchers and no fertilizer or irrigation. Researchers sprayed herbicide for weed suppression. "The plants ... have been allowed to grow on their own, and they've done just fine," Williams said. The hemp cut Tuesday is a variety grown for its fiber production. The harvested plants will stay in the field to cure for about two weeks.

VERSATILE CROP
Hemp is prized for oils, seeds and fiber. Some of the Kentucky crop will be tested for use in textiles and biofuels, Watson said. Growers in Rockcastle County plan to make U.S. flags out of hemp fibers, he said. Hemp is grown in other countries, and finished hemp is legal in the U.S. Hemp advocates say there's a growing market for hemp products. Hemp products sold in the U.S. last year had a total retail value of at least $581 million, up 24 percent from the prior year, according to the Hemp Industries Association.

HEMP'S FUTURE
Kentucky's hemp experiment is expected to grow next year. The state doesn't anticipate any problems with federal drug officials in getting seed shipments, Watson said. Everett McIntosh, a farmer from Garrard County, showed up for the harvest to check out the crop. He has been researching the crop and would like to convert some of his land into hemp production, if markets can be found. "There's so much work invested in farming that this would seem much more economical, if they can come up with processing locations," he said. "That's the only problem right now is to see who's going to invest in that." 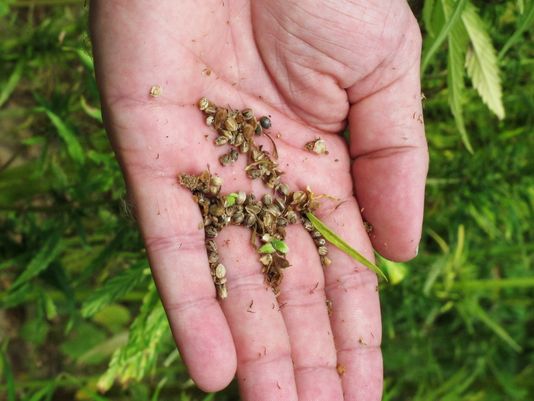