Bob Clayton leaned over the gleaming, industrial-grade oven, his crystal blue eyes focused as he slathered crab spread on golden-brown pieces of bread. While Clayton prepared the crostini, his dozen or so guests sipped beer and sparkling wine in the kitchen and combined living-dining room of his Florida-style ranch home. Scott McKenzie's San Francisco played softly on the Bose sound system. The Saturday afternoon gathering had the feel of any one of a thousand house parties likely happening in Florida at that same moment. Clayton's guests, though, felt like they were making a little bit of history as they mingled. After more than two years of fits-and-starts construction, the 64-year-old retired mechanical engineer was hosting the first party in his house made of hemp. "I'm excited they're excited," Clayton said. "There's a real buzz in this crowd."

On a red-brick street near the Pinellas Trail south of Dodecanese Boulevard, Clayton has built what is believed to be Florida's first – and America's fourth – house constructed of hempcrete. Composed of chunks of the hemp plant's woody core and a lime-based binder, hempcrete is typically poured into forms and packed around wood frames. The breathable material dries as hard as concrete but weighs about one-seventh as much.

The material is common in countries where it's legal to grow hemp. In the United States, though, hemp has a long, complicated history. It was an important crop here in the 18th and 19th centuries, used primarily for rope, twine and bagging. Industrial hemp and marijuana both come from the Cannabis sativa plant, but hemp is cultivated from the plant's stalks and seeds, which contain only trace amounts of the narcotic in marijuana. Hemp doesn't get you high. Still, the demonizing of marijuana that began with the 1936 film Reefer Madness made farmers shy away from the plant. The Controlled Substances Act of 1970 that lumped hemp with marijuana as a narcotic was "the last nail in the coffin," said Linda Booker, director and producer of Bringing It Home, a 2013 documentary about hemp construction. Booker traveled from North Carolina to attend Clayton's party.

She said a hemp resurrection is on the horizon as policymakers take notice of the millions of dollars of hemp products – from soaps to shirts to rugs – imported into the United States each year. In England, hempcrete is being used to build warehouses, townhouses and department stores. "We now have some politicians that have seen we're cutting American farmers out of an opportunity that 31 other industrialized nations are taking advantage of," Booker said. A small section in this year's Farm Bill authorized the growth of industrial hemp for research by departments of agriculture and higher education institutions in states where hemp cultivation is legal under state law. Not in Florida, though. At least not yet, said Ingrid Setzer, a Cape Coral florist and the founder of the fledgling Florida Hemp Industries Association. Setzer organized Saturday's party to build momentum in Florida's grass roots movement.

"The time is right, right now, for hemp," Setzer said. Clayton, an Ohio native who has helped install oil platforms in the North Sea and done graphic design work in Silicon Valley, wanted to know if a hemp building could stand up to Florida's hot, wet summers and hurricanes. He worked with an architect to design the three-bedroom, two bathroom home that would blend well in Tarpon's historic district or in a traditional subdivision. He eventually parted ways with a contractor who had never worked with hempcrete and finished the job himself. He moved in this past January and kept working on the interior.

The walls, covered in stucco, are a foot thick and can withstand winds up to 150 miles per hour. Concrete production spews carbon dioxide, but the roughly 3 acres of hemp used to build his house absorbed the greenhouse gas without the need for herbicides and pesticides. His electric bill for the 1,640-square-foot home has peaked at about $90 this summer. Hemp houses, he thinks, might help save the world. The estimated $350,000 price tag is high, even with the granite finishes, maple cabinets and hickory floors, but Clayton said that cost would come down with a trained labor force working with materials grown stateside. "Hemp is good for America, it's good for American workers, and it's a good, healthy home," he said. "I just wish people would wake up and eliminate this stupid ban and let farmers grow." 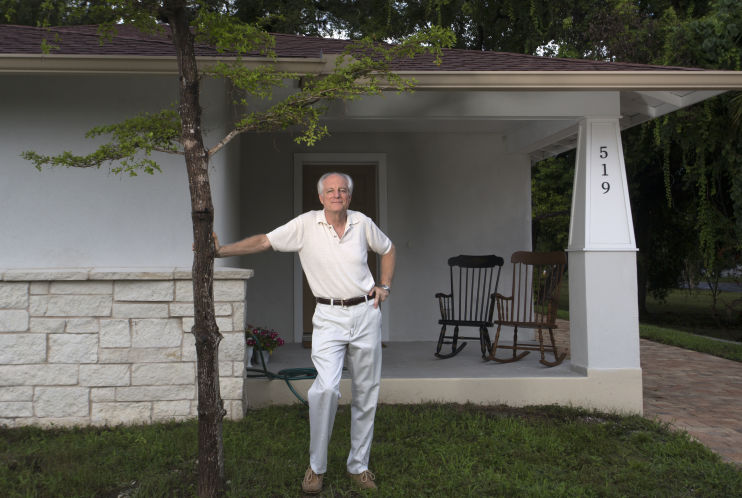 J
Florida: 'Hemp House' Owner An Ambassador For The Crop