When you drive past the acres of hemp fields in Galeton, you might mistake the green spongy plants for marijuana.

It would be an easy mistake to make, but it is a mistake - and it's one that's causing a struggle for the emerging hemp industry.

As the director of agronomy with Colorado Cultivars at TLC Farms in Galeton, Damian Farris said he has to explain the difference to curious people all the time, because they think hemp is just an excuse to grow marijuana. Farris said the failure to make this distinction is, in fact, one of the biggest barriers in the growing hemp industry.

Colorado Cultivars was a stop on the Greeley Chamber's annual Ag Tour Friday, themed "Not Your Grandpa's Farm." The tour focused on nontraditional farming options, like hemp.

Hemp production was legalized in 2014, with the passage of Amendment 64.

Yes, you caught that - industrial hemp production was legalized with the amendment that most of us know as the one that legalized recreational marijuana.

The hemp and marijuana plants are in the same family, but you can't get high off hemp, no matter how hard you try.

By law, hemp plants must contain less than 0.3 percent THC, which is the high-inducing part of marijuana. Marijuana plants typically contain at least 18 percent THC.

With a number of crop prices like corn and wheat at a 5-year low in 2016, many producers are looking at other options to make some money. That's where things like agritourism and hops come in - and yes, hemp.

Farris said he's been interested in hemp and all of its varied uses since he was 17 so when the ban on growing hemp was lifted in Colorado, he was quick to jump into the emerging hemp industry.

He spent the summer of 2014 walking along fence lines trying to find the plant growing in Colorado so he could be certain it'd grow in Colorado's arid climate. Finally he found it in Peetz, which is a tiny town in the northeastern corner of the state.

Now they are working out the kinks and trying to tame the plant and make it more reliable.

Farris deals with the breeding and general operations for the largest hemp farm in the nation, located in the heart of Weld County.

Farris works with the Dave and Tyler Dyer, who handle the farming end of the deal.

They have about 1,200 acres planted this year mostly near Galeton. Colorado Cultivars holds probably about 20 percent of the state's planted hemp crop.

At Colorado Cultivars, they are focused on producing hemp for grain, to be made into food products and oils.

"There's so much that can come from this plant," he said.

Hemp hearts are high in protein, making them good to eat. The crop can also be used to make oils for cooking, topical lotions, clothing, rope and more.

It's still illegal federally, which creates other roadblocks for an industry that's clawing its way to legitimacy.

Farris said they hope to see it not only be considered legitimate in the future, but also a crop. A cash crop.

"We're really committed to having hemp be a rotational crop," rotating out with major crops like soy, corn and wheat. He thinks introducing a crop like hemp to American farmers will help the commodities market, which this year is not doing well.

"If there's another crop that can provide good income, that means less people will be growing corn and soy so the corn and soy prices will go up," Farris said.

It also uses less water because it has a shorter growing season.

Although hemp is illegal at a federal level, 13 states have jumped on board the hemp train, and for good reason.

Fun fact: The United States buys about half a billion dollars worth of hemp from Canada each year because until recently, it was illegal to grow hemp in the U.S.

Here's another fun fact: The U.S. Navy is the top user of hemp in the country because the material doesn't rot at sea like everything else.

Unfortunately, it's hard to find a company in the U.S. to process the hemp fibers into clothing and material.

It's just one of many hardships the hemp industry is facing, but Farris thinks it will continue to get better for hemp producers as people learn about the crop and more research is done.

"The more information we get, the better off it's going to be for everyone," Farris said. "We want this to be just like soy or corn or anything else that is part of the American landscape." 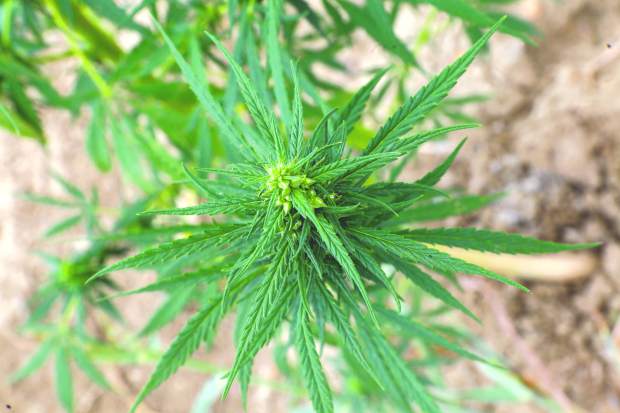