Canada - Mike Fata figures hemp could be the perfect food, if only people would stop snickering. Fata, 37, the co-founder of Manitoba Harvest, has worked for the past decade on transforming the sober cousin of marijuana from the butt of jokes into a supermarket staple. The effort's paying off. Costco Wholesale, Safeway and Whole Foods Market now sell his products, and hemp is on the cusp of a breakthrough, thanks to looser cultivation bans and the food industry's hunger for nutritious plants. Even the stoner stigma is slowly abating as hemp gets recognized for its ability to deliver protein, rather than psychoactives.

"Our customers are bright enough to know that it does not have dope in it if Costco's selling it," says Jim Taylor, a founding partner of Avrio Capital, a Calgary-based venture capital company and one of Manitoba Harvest's backers. "It's more than a fad. We believe we can build a brand here." Hemp is not a drug. It's a variety of the cannabis plant with less than 0.5 percent of the mind-bending compound tetrahydrocannabinol, or THC. Earlier this year, the U.S. government finally recognized hemp as distinct from its seedier cousin, though a federal ban on commercial cultivation remains in place. The ban hasn't stopped imports flowing in from Canadian companies such as Manitoba Harvest, which plans to hand out 2 million samples of its hemp hearts — the soft, nutty-flavored inner kernel of hemp seeds — this year.

Hemp is woven into American history. George Washington grew it, and the nation's first flags were made from it. It's easily digestible and packs more protein than chia or flax. It's also a versatile food: Hemp hearts can be sprinkled on cereal, yogurt or salads, or processed into powders, flour or oil to make everything from bread to beer. Hemp is pricier than, say, chickpeas, but it provides a more complete protein, with all nine amino acids that the human body cannot produce. "We have our eye on it," says Colleen Zammer of Bay State Milling, who has worked with food and beverage companies like Kellogg and PepsiCo to develop and promote healthy ingredients for the past 25 years. "It's THC-free, similar to chia in nutrition, and better tasting."

Hemp's resurgence comes amid a broader shift in climate, crops and consumer preferences. Other protein-rich plants — think peas and quinoa — enjoy booming sales and are in short supply, global warming is scrambling the cultivation map from Argentina to Canada, and environmental concerns kindle demand for local produce. Amid this landscape, opposition to hemp is softening. Fourteen U.S. states have removed barriers to its cultivation, and the farm bill Congress passed in February will allow hemp growing for research purposes in those states. North Carolina does not allow hemp cultivation. Restrictions have eased as even marijuana gains acceptance, and Democrats and Republicans alike support the economic lift hemp could provide industries ranging from textiles to homebuilding.

"Without realizing it, many Americans already use hemp in their soaps, automobile parts, or even in their food," says Rep. Jared Polis, a Democrat from Colorado (where private consumption of pot is legal), and one of the legislators behind the farm bill's hemp amendment. "The potential for a billion-dollar-plus domestic industry is very realistic." Hemp growing has been legal since 1998 in Canada, opening the door for entrepreneurs like Fata. As a teenager in Winnipeg, Fata weighed over 300 pounds and tried countless fad diets until a friend turned him on to hemp. The mix of protein and fiber curbed his appetite for junk food, and he's now a walking advertisement for healthier living through hemp, practicing yoga and eating a plant-based diet.

Going mainstream
Fata and two friends started Manitoba Harvest soon after legalization, yet the lingering association with pot made it hard to gain traction early on — something Fata calls "the snicker factor." Others in Canada's nascent hemp sector say they faced the same stigma. "Some people looked at me and turned right around like they had seen the devil," recalls Shaun Crew, chief executive officer of Hemp Oil Canada. Fata persisted, handing out samples of his hemp hearts at trade shows, in yoga studios, and on the street. A few natural food stores took the product, then in 2001 Fata's big break came when Loblaw, Canada's biggest food retailer with 2,300 stores, signed on.

"A lot of consumers would not give us time of day because of all the misinformation out there," Fata says. "As we stepped up from natural food stores to mainstream stores, the stigma started to go away." Sales have tripled to more than $50 million in the past two years. Prices range from $1.50 for a 0.9-ounce sachet all the way up to $75 for a 5-pound pouch of certified organic hearts. At a recent industry gathering in California, Fata introduced his latest creation: hemp-heart "Snaxs" made with brown rice syrup and organic cane sugar. He figures sales could hit $500 million over the next decade.

Stigma remains
John Elstrott, chairman of Whole Foods, says Fata has helped debunk the myths surrounding hemp through sampling and education. The two companies sponsor the annual Hemp History Week, which this year kicks off June 2 and features more than 175 events coast to coast, including a three-day "Hemp Hoe Down" in South Dakota. Celebrity backers include musician Ziggy Marley and actress Alicia Silverstone.

Still, the stigma is hard to shed. Last year, the U.S. Air Force told its pilots to steer clear of a variety of Chobani Greek yogurt that came with a side packet of hemp seeds to be tipped into the pot. The Air Force said the product could have enough THC to be detectable under its drug-testing program. Chobani has since replaced the hemp with other seeds, according to a spokesman. It doesn't help that some hemp companies revel in stoner stereotypes: There's even a hemp gin and vodka brand called "Mary Jane's."

Easing his black Jeep Rubicon into the parking lot of the company's plant on the industrial northwest side of Winnipeg on a frigid March morning, Fata checks in on the $6 million expansion that he says will triple his annual production. He mentions that representatives from Safeway approached him about making hemp-flour bread for its in-store bakery. Safeway declined to comment. "Five years ago that would not have happened," he says. "Hemp is hot."

The expansion is good news for the food manufacturers waiting to add hemp to their products. Take Post Holdings, maker of Grape-Nuts and Alpha-Bits cereal. The company's Erewhon brand, acquired in 2012, offers a hemp and buckwheat cereal that is one of its top sellers. Jim Holbrook, executive vice president of marketing, said the St. Louis-based company is also "actively pursuing" hemp as an ingredient in an upcoming cereal from its Great Grains imprint.

Other companies aren't keen to discuss their plans. PepsiCo and Kellogg declined to comment. ConAgra Foods and Kraft Foods said they have no plans for hemp, leaving the market open for smaller outfits such as Nutiva and Nature's Path Foods. If hemp is going to become a billion-dollar market as its backers claim, more big companies need to get on board. The lingering stigma, Fata says, shouldn't keep mainstream manufacturers from seeing its promise. "They missed the Greek yogurt boom," Fata says. "They don't want to miss out on this." 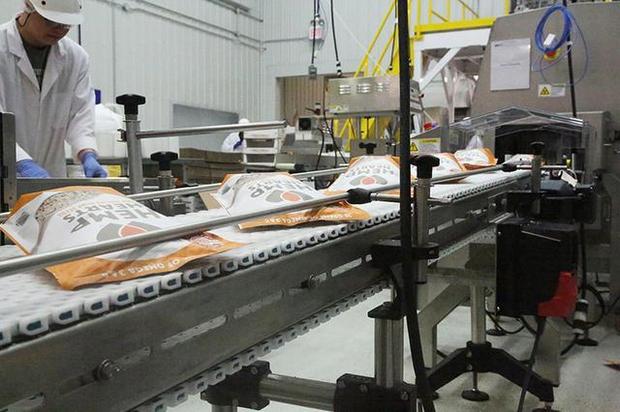