Hemp Supercapacitors May Power Devices Of The Very Near-Future

Sometimes hemp boosters are really annoying, but that doesn't mean there isn't a load of quite real and valuable potential in the celebrity crop-in-exile. While those boosters are highly adept at finding/resurrecting uses for the plant in just about every industrial and agricultural category imaginable, I think we can all be a bit surprised by the suggestion that hemp might beat out the much-vaunted graphene for its potential within future supercapacitors. This is the claim being made by a Canadian startup in research being presented this week at the 248th National Meeting and Exposition of the American Chemical Society.

First, we need to understand just a bit about what a supercapacitor even is. Basically, it's a common tool for storing electrical energy using electrochemical principles, as opposed to a conventional capacitor, which stores energy using electrostatic fields. In the latter case, you'll find two conductors (terminals) separated by some sort of insulator.

When opposite electric charges are added to each terminal, the effect is like pushing against a spring, where instead of the electrical energy piled up at the positive terminal being absorbed (as if it were pushing against a foam pad), it's stored up, with more compression on the spring being like more charge stored in the capacitor. These tiny bits of stored charge often used for "smoothing" currents within circuits.

A supercapacitor trades the spring any number of different things, generally some electrolyte, or a substance that gains or loses some charge when dissolved in a liquid. When voltage is applied to this arrangement, the result is a weird stack of different charges along the boundary between an electrode and the electrolyte solution. This double layer is able to store a charge, so rather than a static charge between two electrodes, you have just a weird electrochemical buildup between them. This version is capable of storing charges many thousands of times larger than a conventional capacitor.

The frontier of supercapacitor technology is commonly accepted to be graphene. The material, a one-atom thick version of common graphite, is an extraordinary conductor compared to the carbon currently used as electrodes. This conductivity means achieving a far greater energy density, and the potential to push supercapacitors to the point that they replace batteries. Rather than the gnarly chemistry and long charge and discharge rates typical of batteries, supercapacitors charge and discharge in seconds while using a greener electrolyte to store power, rather than the sustained chemical reactions of batteries. Graphene's energy density could take supercapicitors into the ugly and highly-restrictive realm of powering devices like phones and tablets.

The new hemp-based research comes courtesy of David Mitlin, a researcher now based at New York's Clarkson University (and formerly of the University of Alberta). Mitlin has made electrodes from certain hemp fibers known as bast, which is typically wasted in hemp industries, using a new process that isolates graphene-like carbons from the material using a sort of slow-cooking process. The resulting carbons, while not properly graphene, behave in almost the exact same way, with the same conductive properties.

"Our device's electrochemical performance is on par with or better than graphene-based devices," Mitlin said in an ACS statement. "The key advantage is that our electrodes are made from biowaste using a simple process, and therefore, are much cheaper than graphene." This is crucial, given the potentially prohibitive costs of producing that material.

The basic process involves heating the hemp bast for around 24 hours at 350 degrees Fahrenheit. Once sufficiently cooked, it's then a matter of blasting the bast with very intense heat. The thin carbon fibers then exfoliate into carbon nanosheets. "The trick is to really understand the structure of a starter material and to tune how it's processed to give you what would rightfully be called amazing properties," said Mitlin.

He notes that the technology is already well beyond proof-of-concept and has been put to use in actual supercapcitors, with the result performing with energy densities two to three times that of any commercial supercapacitor on the market, or at least on the current market. Mitlin noted, finally, "now we're gearing up for small-scale manufacturing." 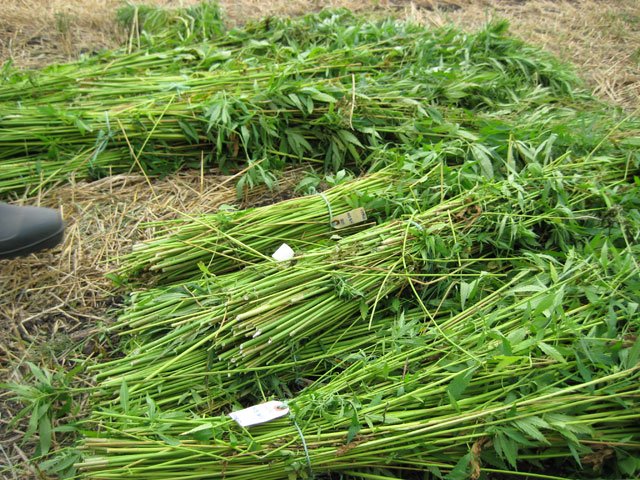 Unbelievable. What use for hemp will they find next?

Just imagine where we might be today if research had not been banned for 70 years!

Aug 15, 2014
The General
T
T
Yet Another Reason Why Industrial Hemp Is Right For North Carolina