Hemp Will Be Our Bamboo

Two years ago, when Japanese friends invited me to visit in their newly built home near Tokyo, I discovered that my friends and their compatriots abhor two American staples: clothes dryers and synthetic fibers. Practically every balcony holds clotheslines strung across it. Bedrooms are not carpeted; instead, floors are covered with bamboo matting that is pleasing to the eye and feels good on slipper-clad feet. (My street shoes, like everyone else’s, remained in the entry.)

Contrast the bamboo mats with the floor covering in my newly built farmhouse. The bedrooms are carpeted with synthetic fibers. The remainder of the home, which I decided must be utilitarian, features what looks to be weathered planks fitted together: There are the knotholes, the tree rings, the saw-tooth marks, the spacing gaps.

Alas, the knotholes and the rest are fake. Get down and run your hands over the surface of the “planks” and you’ll find them smooth as glass. That’s because the flooring is an artifice: it is plastic pretending to be something else.

To add injury to insult, the stuff is frightfully expensive. Plastic is costly, as well it might be, considering its footprint as a petroleum-based product.

Notwithstanding the ads coming at us from every direction, American consumers have precious few choices. When I asked the builder about hempcrete, which is used in Europe not only because it’s environmentally friendly but also because it avoids health problems for people with sensitive constitutions, he said it would be prohibitively expensive hereabouts. So much for enlightened building practices.

European automakers, from BMW to Mercedes, outfit vehicle interiors with panels made of “hemp plastic.” Fashion designers like Giorgio Armani use hemp fiber in haute couture clothing. Health food stores offer hemp products, from granola to hemp milk to shampoo to cosmetics; indeed, Canada exports many of these products from their country to ours. Meanwhile, continued political complacency forbids the growing of a product that’s cheap to cultivate and good to use.

Americans are the victims of massive lobbying by industries that have something at stake in maintaining the status quo. And the government, colluding with the moneyed interests, works against its own constituents.

Steve DeAngelo recounts this episode from his Washington, D.C., days:

One day Jack Herer returned from the Smithsonian Museum in outrage: The venerable institution presented sails and ropes, homespun textiles, and pioneer wagons with covers made of hemp, without labeling them as such. When he complained to the museum, “officials responded that there are some parts of American history children didn’t need to know about.”

The two muckrakers countered by creating a “Hemp Museum” of their own, right across from the Smithsonian, in a surplus army tent.

The Hemp Museum “was a huge hit,” DeAngelo reports. Despite a 20-degree wind-chill, “people lined up to get inside the MASH tent” where Jack Herer “preached the Gospel of Hemp for days on end, and the responses he got were overwhelmingly positive.” Naturally, he emphasized the irony that growing hemp was illegal in the U.S. but importing it was not.

DeAngelo eventually imported hemp twine from Hungary. “Over the course of the next decade, we designed and manufactured 150 new, high-quality consumer products ... all were 100 percent cannabis.” Further, the publicity “did generate a huge amount of education about cannabis.” A website of “feature photos and information about hemp ... was getting thousands of hits a month.” That was back in 1995!

His brother Andrew, who needed medical cannabis for treatment of glaucoma, were thrilled by California’s passage of 215. In 1998, both worked hard on Initiative 59 in DC, which won with 69 percent of the vote. “We carried every precinct in a racially divided city,” he reports, “but our joy was short-lived. Before the law could be implemented, the U.S. Congress used its power as D.C.’s ultimate authority to veto the initiative.”

He describes it as “the single most disillusioning event in my life.” He had been taught that every vote was sacred. He had been advised to change the law if it’s unjust. “Then we won - and the rules of the game were changed.”

In spite of their setbacks, these entrepreneurs did lay the necessary groundwork. Today, 23 states allow hemp cultivation. A few years from now this pretentious floor of mine will be covered with hemp rugs. When hemp fields surround this house, you’ll find cars that run on hemp biofuel. I may be long gone, but hemp will be our American bamboo. Common sense will see that it does. 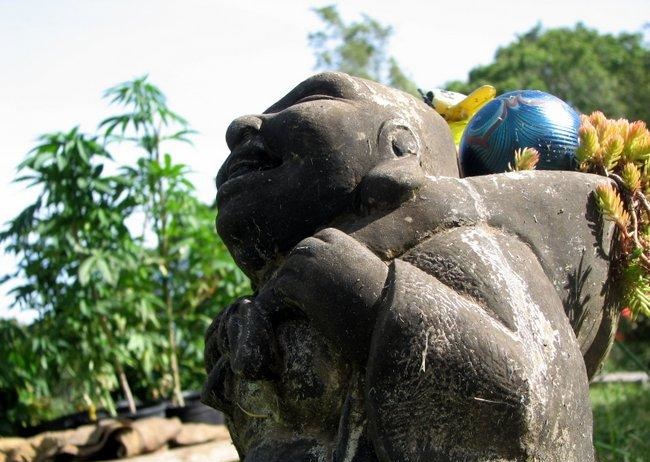 What a great article.
B

One day Jack Herer returned from the Smithsonian Museum in outrage: The venerable institution presented sails and ropes, homespun textiles, and pioneer wagons with covers made of hemp, without labeling them as such. When he complained to the museum, “officials responded that there are some parts of American history children didn’t need to know about.”

It's still chills me to hear things like this, it truly does. It reminds me of an episode in the completed Canadian TV show continuum, where to terrorists/activists from the future, who came back to the past to try to change the future, comment on how the future government whitewashed the history that they are living in now by going into the schools and literally deleting decades of history that cast the future government in a very bad light. Yes I know that sort of thing takes place regularly, one need only to crack open a grade school textbook these days to see things like the trail of tears, Japanese internment camps, and even slavery now being glossed over but to see that someone who works at a museum, whose job it is to make "history come alive", say such things, it makes me wonder about our country.

I hope people like Jack Herer never go away and never lose their desire to speak the truth about our history, regardless of it is politically palpable at the time or not.
I'm legally blind, so if I write something...odd I blame the Voice dictation program. Just let me know if it's so bad that I need to repeat it!

Hemp And Bamboo For Your Car Interior