Here's What Missouri Marijuana Laws Could Look Like In 2017

Right now, a strong push is being made to completely overhaul the existing Missouri marijuana laws. A vote for medical marijuana legalization in Missouri just missed being on the Nov. 8, 2016, ballot by roughly 2,000 signatures.

And if medical marijuana is legalized in Missouri in 2017, it would help the $3.1 billion in sales already projected for the United States this year to skyrocket even further.

Right now, marijuana is illegal for recreational and medical purposes in Missouri.

However, Missouri has been updating its marijuana laws since 2014. In 2014, Missouri revamped its criminal code when it passed Senate Bill 491. The bill reduced sentences for cultivating and selling marijuana, and the new law took effect on Jan. 1, 2017.

As of Jan. 1, the penalty for possession of up to 10 grams of marijuana for first-time offenders in Missouri is just a misdemeanor. Possession of between 10 grams and 35 grams is a misdemeanor that could lead to one year in jail and a max fine of $1,000.

In July 2014, Gov. Jay Nixon (D-MO) also signed the Missouri Medical Marijuana Bill. The bill allows some patients with epilepsy to use CBD oil for treatment, according to The Daily Chronic.

But the two Missouri senators want to expand access to marijuana for Missouri patients in need...

Under Senate Bill 153, physicians would determine how marijuana is delivered and consumed by their patients.

Sen. Jason Holsman's (D-MO) Senate Bill 56 would establish a statewide medical marijuana program. Licenses would be granted by the Missouri Department of Health and Senior Services for the cultivation, manufacturing, distribution, and sale of medical marijuana.

Senate Bill 56 would create a large list of qualifying conditions for medical marijuana just like Bill 153. Individuals under the age of 18 would be allowed to use medical marijuana with consent from their parents and the recommendation of a physician.

Surplus revenue from taxes would be used for the care and health services of military veterans through the Missouri Veterans Commission.

And Missouri could also be one of the next states to legalize recreational marijuana as early as next year...

Recreational Marijuana Could Be Legal in Missouri by 2018

A vote "for" the Missouri Recreational Marijuana Legalization Initiative would have allowed people 21 years of age or older the right to consume, sell, and distribute marijuana. It would have also allowed the right to manufacture goods from hemp.

Legalizing recreational marijuana would have been difficult without even a medical marijuana program in place.

But if Missouri legalizes medical marijuana in 2017, the state will be better prepared to regulate the industry. The state can have systems for driving laws, application processes, and taxes all in place through medical marijuana legalization.

According to The Daily Caller, marijuana activists have already filed a petition with the secretary of state to put it on a November 2018 ballot.

And if Missouri residents vote "yes" for recreational marijuana, the economic impact will be huge for local and state governments.

However, it's not just local governments that will benefit from recreational marijuana legalization. 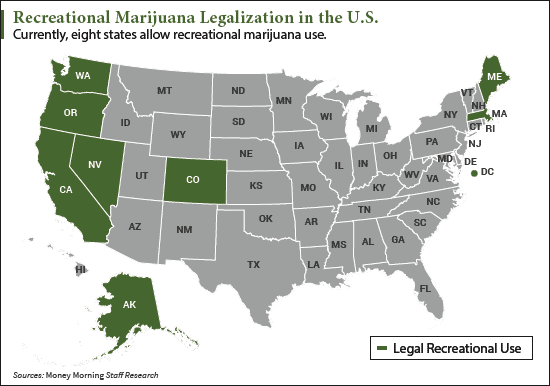