Heya, I'm a new guy on this site.. Some great journals, thats why I joined. I smoke for medical reasons in a non-medical state which I think is just plain criminal. How fair is that, that some people can smoke with relatively no problem and others are forbidden to do so when it would help us out just as much???

They need to just let every state have a medical pot program if you ask me.

I have deteriorating disks in my back, and have suffered massive head trauma in an automobile accident(had to get my head stapled back together, 13 Staples) so I get migraines every other day. I don't like the pain pills they used to give me so I just smoke some frosty nuggets and I'm A-ok for awhile.

Screw those opiates give me some dank anyday for this pain!

I was growing about 5 big girls outside this summer, but a fellow grower knew I had something going on in the relative area and after I smoked him up one day he kept buggin me to see the girls and I wouldn't show him. He came back the next day in broad daylight and stole my biggest girls. Now I got one tiny girl across town that I tucked away just incase something would happen to the big ones, sure enough it did.

They're babies so far though about a week old but they'll get there someday. Growing 3 of each strain because I've never grown these strains and I want to do a sampler run first to get familiar with them. Right before harvest I'll decide which strain I want to run first.

I'm hopefully gonna do a breeding project with Northern Lights and Hindu Kush. Even inbreed the 2 strains just so I have seeds for future use. That should be ok they are both supposedly Inbred Lines (IBLs). I might even make some F2 White Rhinos if all goes right. My biggest sprouts right now are a Rhino and a purple tinted Northern Light. I had some trouble with my first 2 Kush plants I set them outside and forgot em then slugs got both of em that night. 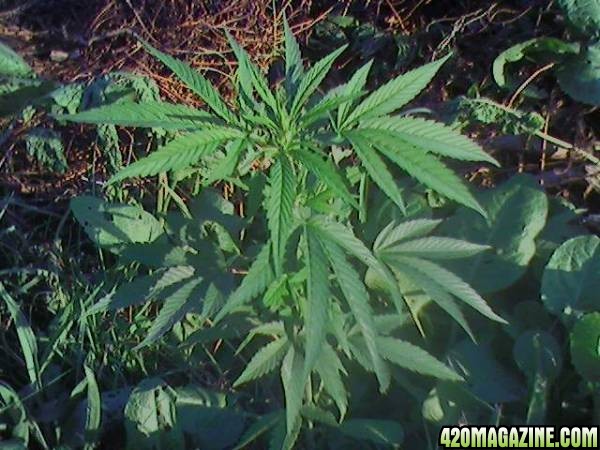 Think this is how you post pics here, I dunno I'm new! but this is my outdoors baby that survived! She is in the stretch phase of flowering. She was only 10 inches tall 2 weeks ago. I put her far away from my house so I couldn't really take care of her but once I started feeding her and stuff she blew up the past 2 weeks! She's got about 7 more nodes than she did have and she smells wonderful. Her big sister had a distinct strawberry smell but this girl just smells like chronic.

I only got one male this summer outdoors, thats the best % I've ever had. Usually I got 3 out of 4 males I dunno must be bad luck of the draw but I hope thats about to change especially since I got my purchased genetics going now. This is the first time I've ever bought seeds i was always sketched out about it. I'd grow local Middies and the occasional scarce nugget seed but they were definitly hermie genetics. They'd pop bananas all the time, cause they were probably seeded by a hermie in the first place.
Last edited by a moderator: Sep 4, 2007

Ooops Sorry I posted an outside image. I just read up on how to do it and they're awaiting approval. No harm meant, I'm new!