Outside the warehouse, even from the road, the smell is unmistakable. And once you step inside this unassuming building, across the street from a busy police station in northeast Denver, you can see it, too: About 6,500 flowering marijuana plants, each about 6 feet high, stretching as far as the eye can see. The warehouse is one of several in a thriving industrial zone that forms the center of a gold rush for Colorado's legal weed farmers. Locals dub it the "Green Mile."

Along with Washington state, Colorado has been at the forefront of the movement to cash in on legal marijuana. But now marijuana entrepreneurs in the booming new economy have their eyes on another market – in the Land of Lincoln. Figures released by Colorado this month suggest medical marijuana sales there are on course to hit $395 million this year.

While direct comparisons are imprecise, if Illinois residents purchase medical weed at the same rate that Coloradans do, the larger market here could be worth nearly $1 billion a year. Some experts, though, believe that's optimistic because of the limited number of growers and sellers under the Illinois program, as well as tougher

A Colorado company called beMindful that built the vast Denver pot farm and helped lobby for the legalization of medical marijuana in Illinois, hopes to be one of the players bringing industrial scale marijuana farms to Illinois. Along with a group of Illinois partners, beMindful is competing to win one of 22 coveted state licenses to grow marijuana in Illinois, so patients with serious health problems can use the medicinal plant next year.

The partnership, called Illinois Plantco, has drawn up plans for an 160,000 square-foot plant, half of which will be given over to a huge greenhouse, in Will County, where it hopes 125 local workers will one day tend pot plants. "We look forward to basically taking all the hard work we've done here in Colorado and applying it in Illinois," said beMindful CEO Megan Sanders.

"It's great to see the change that's happening," said the company's 38-year-old chief horticulturist, Phillip Hague, who comes from a long line of Texas flower farmers. "I never thought I would be running a very large cannabis business on this scale," he said. "Building greenhouses. Pushing legislation in other states. Never in my life did I believe it would happen. It's not a dream. It's better than a dream."

Growing 'Bubba Tom Hayes'
You're never far from a watchful camera in beMindful's Denver plant. The cameras monitor a humdrum office space – unremarkable except for the marijuana posters on the walls – and everything through a set of doors into the cultivation center. Vents hum and fans whir throughout the 44,000-square-foot facility.

Sophisticated lighting and watering systems keep the company in the weed. Among its more than 65 employees, beMindful has three engineers keeping things running, including one who was, in another career, literally a "rocket scientist." More than 30,000 gallons of water a day are used. Some 3,500 amps of electricity keep blinding lights blazing 24-hours a day, Hague said.

"We have rooms that are continually summer; very long days with 18 hours of light; some up to 24 hours of light," Hague said. As they grow, plants are moved from room to room. One room holds the "mother plants." Some have been propagated since the 1970s, Hague said. Another houses the babies. Low lights and palpable humidity soothe the tiny, green seedlings still trying to establish roots. "This is where it all starts," Hague said proudly.

He prefers to grow his plants from seeds "to stay ahead of plants as far as disease and pest infestations." "Cannabis has been grown illegally in peoples closets and basements and very small greenhouses for the past 50 years," Hague said. "Most of the attention has been paid on high THC content, yield, particular tastes and smells, and they've put things like disease resistance and overall vigor on the backburner."

Hague uses predator mites to take on bad bugs. And he plants green beans throughout the marijuana. It's a "flagging plant" that will attract a pest and alert the farmers. No chemicals are used, he said. "I love the plant," Hague said. "Being able to incorporate these large scale agricultural practices with a love for this specific plant has really been the driving force behind what we do." Each room houses a myriad of strains and with names that evoke a bohemian idyll. "Highway Man" is described as a "classic hybrid" of the legendary "Williams Wonder," "Tang Tang" and "SSSC" strains. "Bubba Tom Hayes," is a mix of "Bubba Kush" crossed with "Tom Hills Haze" – it "sounds like some old hardass Texas sheriff," Hague joked.

Grape-soda smells, tooth-infection tang
As a plant grows, it's moved to a brighter room. Medicinal plants are tagged with yellow labels, while blue labels are attached to plants for recreational use. As the plant sprouts flowers, wispy white buds appear. The "flowering rooms" get 12 hours of light — automatic timers flip the lights on and off.

It's there that robust plants give off an overpowering earthy, musky, scent. "Skunks and tires. It's one of my favorites," Hague said of the smell. "There's a sweetness on the back end of all it but it's just a real musky, chemically smell to me." Each strain gives off a different scent. There's the "Purple Urkel," which "smells purple. Like grape soda and grape Jolly Ranchers – fake grape candy," Hague said. Or the "Chemdawg D." "To me [it] smells like a tooth infection," Hague said. It "smells like rotten bloody mouth. It's kind of disgusting."

Each of 12 rooms in the warehouse can hold between 400 and 1,000 plants – at least $500,000 in pot, company officials said. In Illinois, they plan 24 rooms. Once the plants are ready, they're harvested by hand and then trimmed either by hand or machine. Workers, clad in scrubs, set the buds out on wire trays or by hang them to dry.

To fill orders, plastic, childproof, containers just like those used for prescription medicine, are filled with the marijuana. Refuse from the plant isn't wasted. It's used to make concentrate products like hash, wax or cannabis oil. Or it's sold to companies that make "edibles" – food products infused with THC.

Hague and his team process more than 450 pounds of marijuana a month. They hope Illinois medical marijuana patients will benefit from their expertise. So far, more than 6,300 seriously ill Illinoisans have applied for the right to do so. "It's a flood of emotion everyday to be able to do this," Hague said. "To know that something that I fought for so many years, – risked my livelihood, myself, my family – now that it's in the light and that it's legal to a point in this country, it just blows me away." 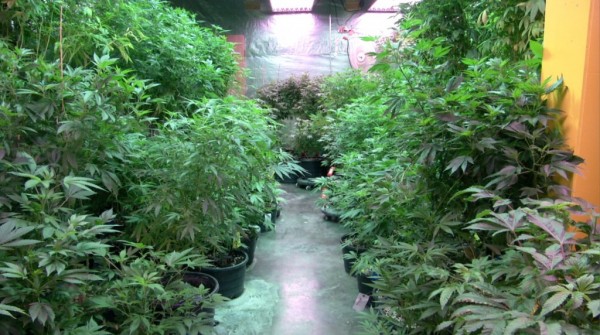 Mar 11, 2015
Jacob Redmond
J
T
Want To Open A Marijuana Dispensary In Illinois? It Will Cost You

May 13, 2014
The General
T
K
Marijuana Cultivation In Illinois Is A Professional Operation