Thanks for stepping in!
I decided to start a grow journal here...to...hmmm...show off somewhere

Not like I'm an expert grower. Only started a 1 'n a half year ago. Had a couple of succesfull crops with White Widows and Criticals, both in ebb 'n flow and in soil. The hydro was a micro box -home made- 40X40X100cm with 120w LED.
Now I started a hydro in my -not so- big box
So here's the setup

80X80X160- Cultibox
160m3/h extractor fan on a 150m3/h carbon filter
Seedling stage : ~30w LED - unfortunately my LED's 5W diodes has no transformer anymore so I use it for seedlings/clones -
Vegetative stage : 150W CMH in home made "adjust a wing"
Flowering stage : 250W HPS in Diamond D400
GHE micro/bloom nutes with advanced hydroponics root stimulator on the start -2 to 3 weeks depends on how the plant will develop or how I'll feel

The genetic I'll run this round is : Paradise Seeds - Wappa
Only 1 plant with a long veg stage. Let's say I like to experiment, even if it's not the most efficient way I could grow

I've put the plant into the system yesterday. Feeding her with 0,2EC nutes + 0,7ml/l root stim.
Will rise the EC to 0,5 in 4-5 days until the beginning of the true veg stage.
Since I don't know the strain's needs I can't say how much I plan to give her later on...will update anyway...
Hopefully I'll able to put in the 250W HPS for flowering...it all depends how low I can keep the branches with the scrognet.
The box is too small for a Cooltube system -beside the plants- and I don't really like them anyway...

Not much to show so far but here it comes 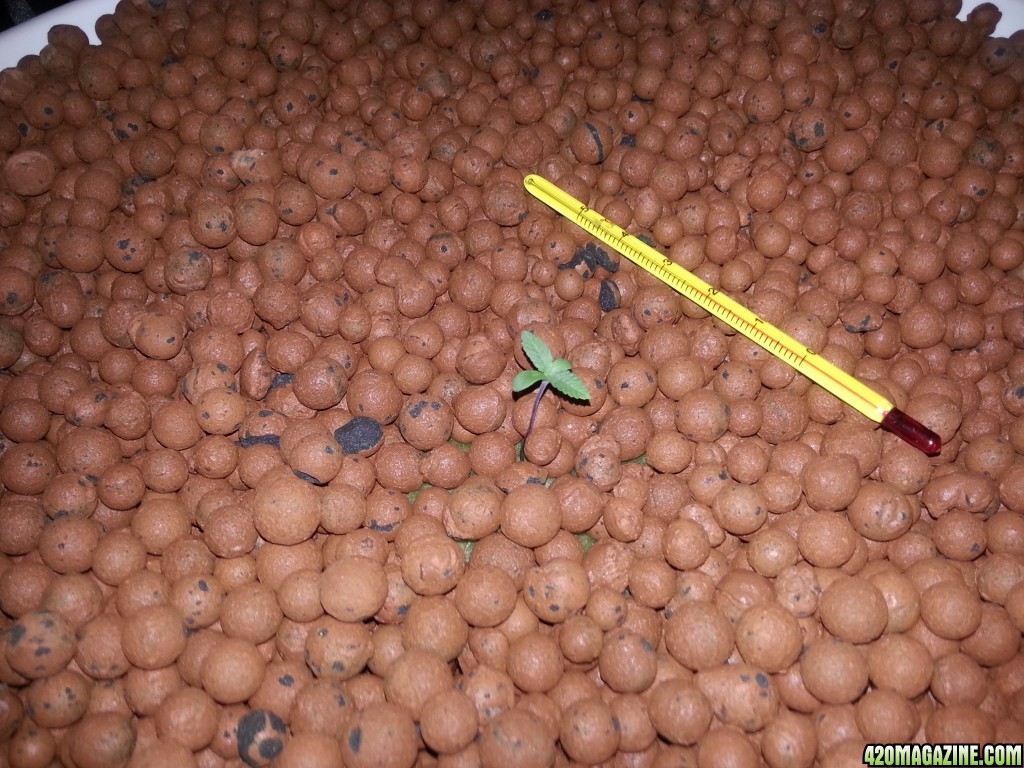 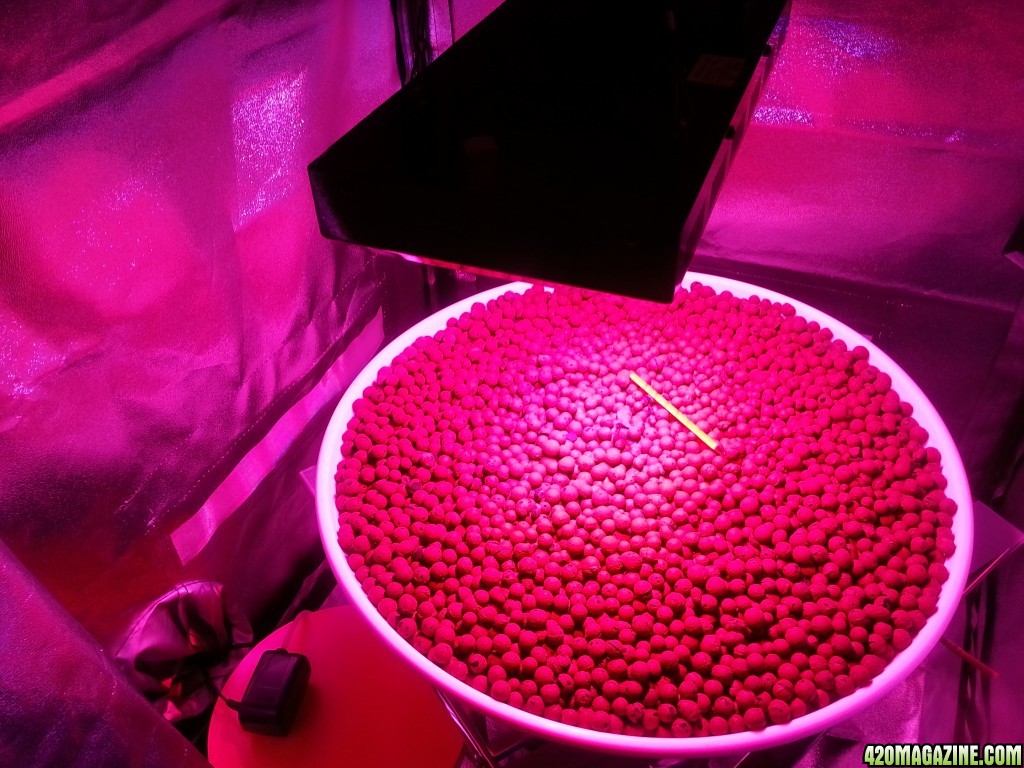 Stay tuned! Peace
The grass is greener on the other side...
H

Not much happened. Gained some foliar in the last few days.
In the previous post I forgot to mention that I maintain a ph range of 5,8-6,2. EC now 0,5 + 0,7-0,8ml/l root
When the 3rd set of true leaves formed I'll put in the CMH.
She looks a littlebit yellow to me...hopefully she will outgrow it. Never had this strain b4 tho.. 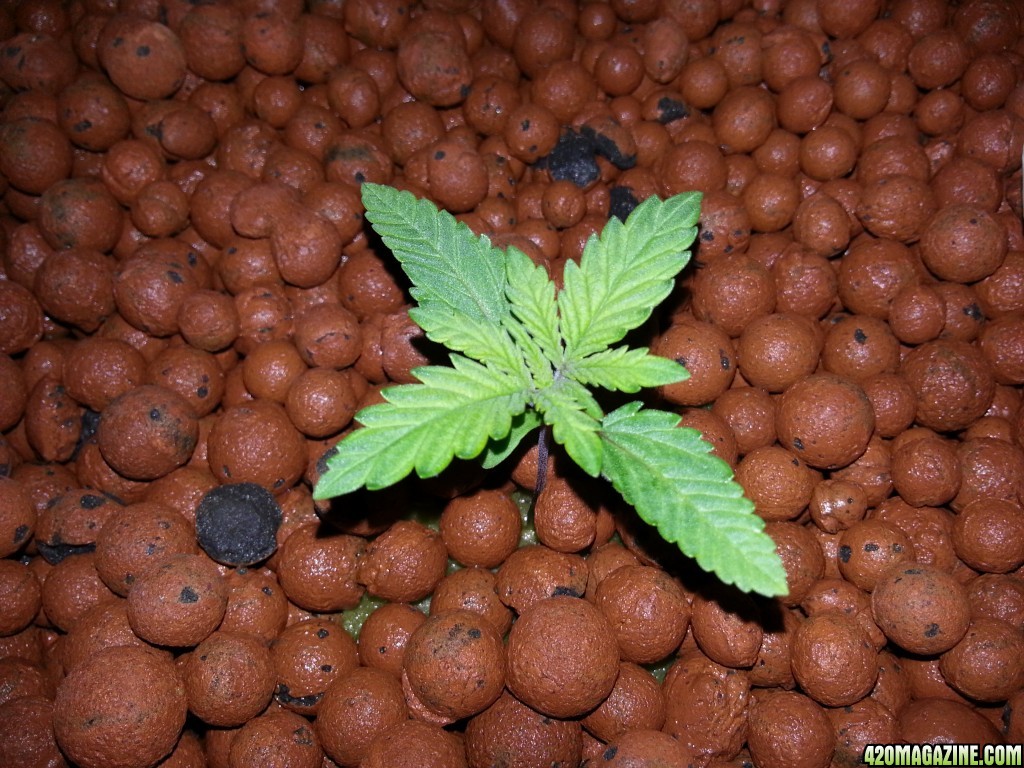 I don't want this thread to be boring so I'll only update when she's topped.
I would like to add 1 more thing. The reason I've decided to run 1 plant with long veg stage is, I want to see how much I can pull off from 1 plant, in a 80X80 box with hydro. Trying to aim for 250+. Anything under 250gramms will be disappointing in my view


Stay tuned!
The grass is greener on the other side...
H

The plant grows pretty fast, just as fast as u could expect in hydro. Switched the light, so from now on she receives 150W (only

)
Topped the lady @ the 3rd internode and removed the first pair of sidebranches. I don't want any leaves touching the medium. 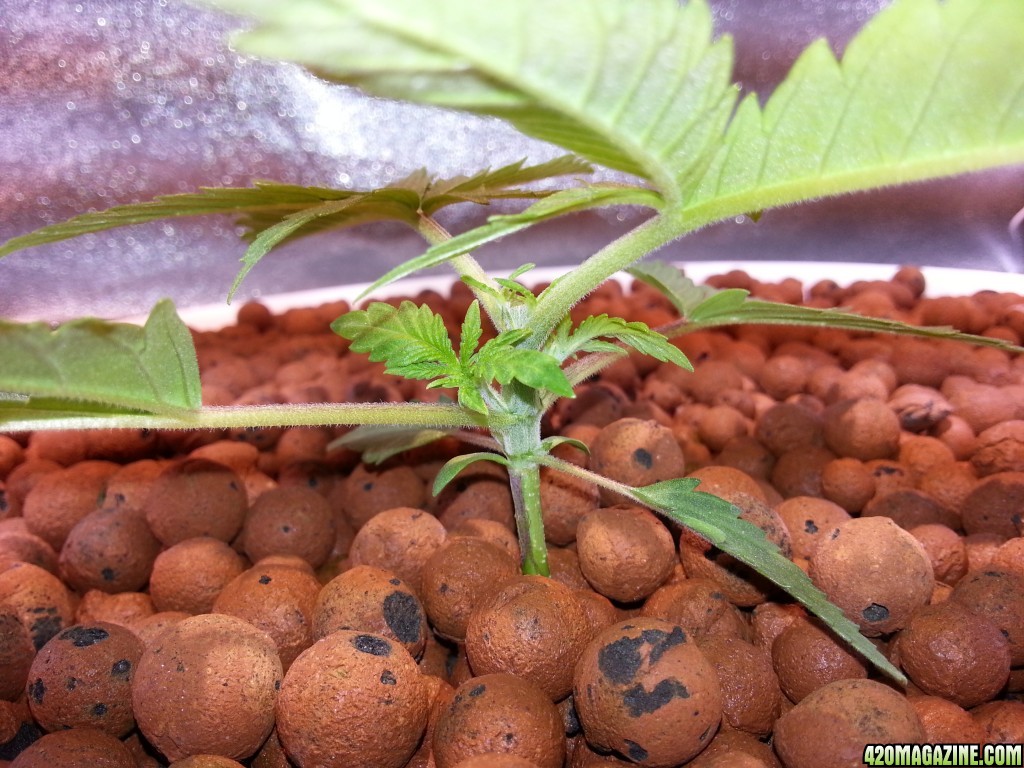 Right after the top 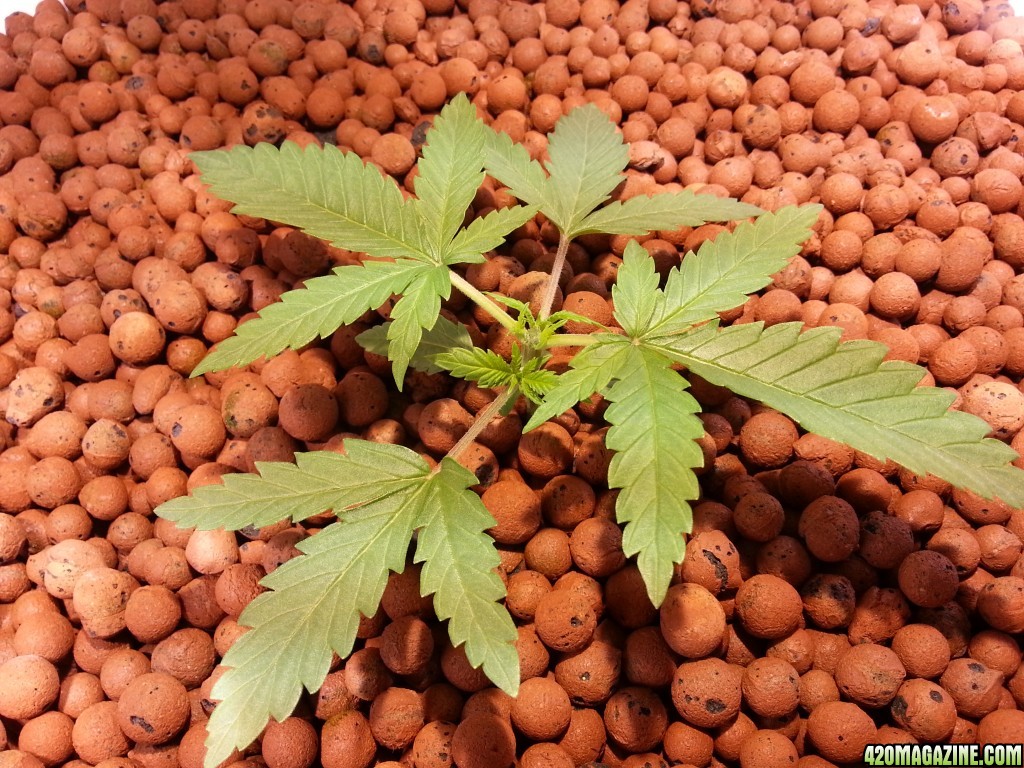 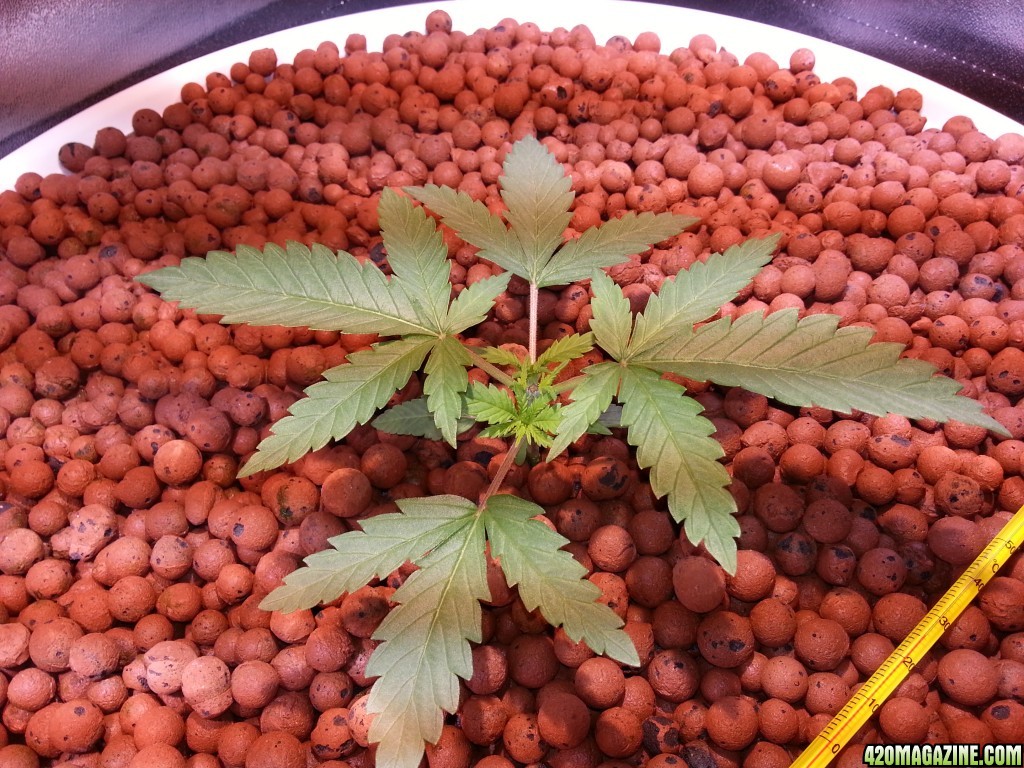 The scrog net was added to the system on the w/e. I wasn't really thirsty so I accidently broke 1 of the branche off

Moar training is to come bcoz I ain't got the "equality on the board" anymore...well whatever, the stronger the stem the bigger the bud

Here's the lady...she's really on steroids 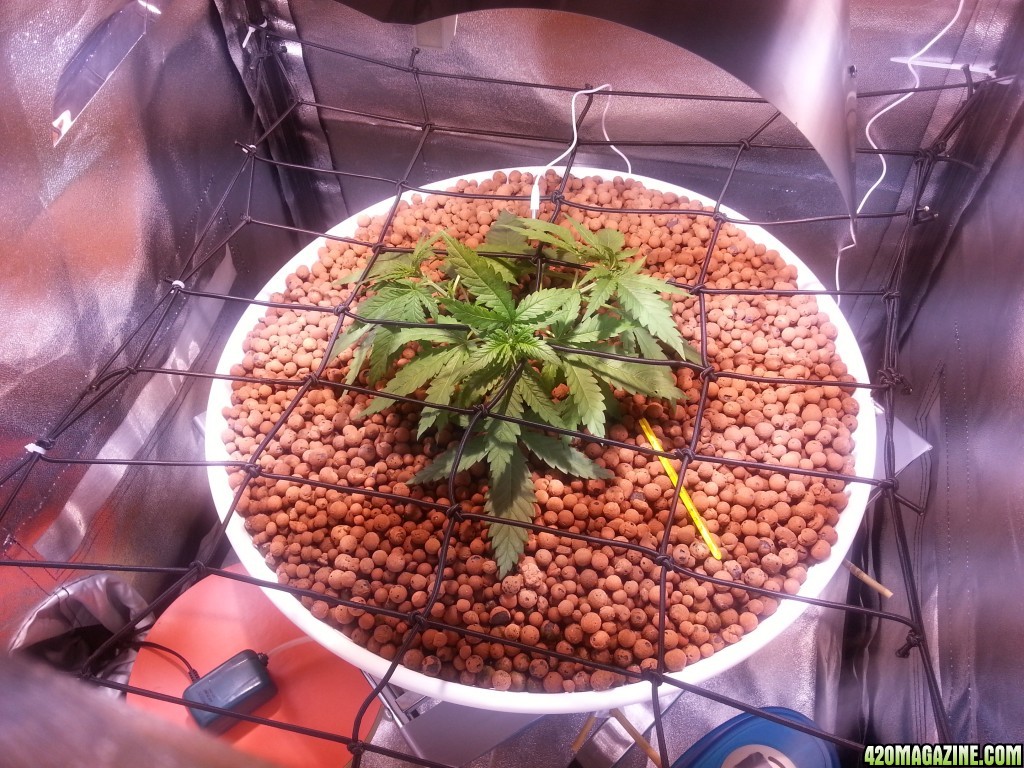 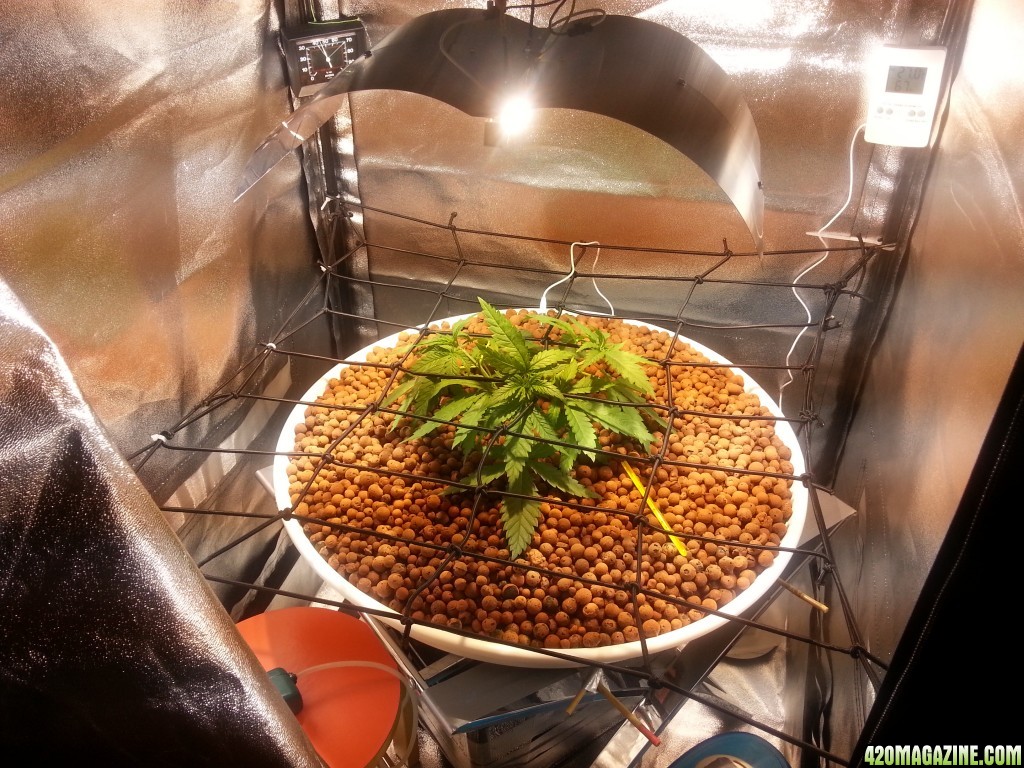 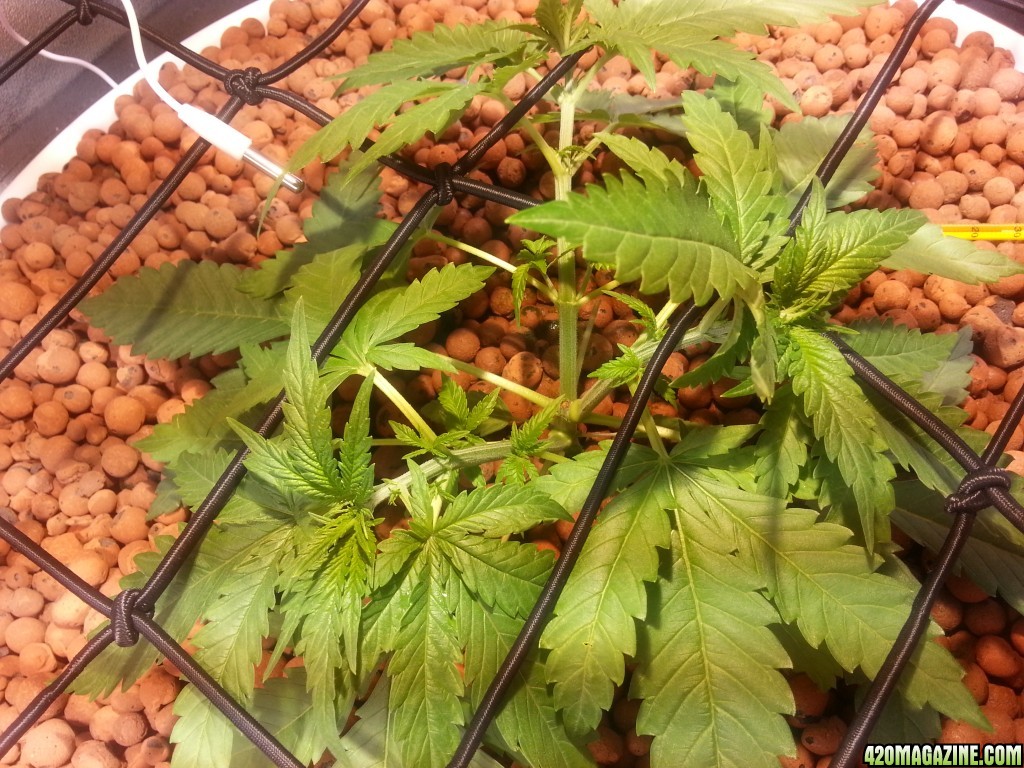 Stay tuned!
The grass is greener on the other side...

Welcome. Is it safe to assume you plan on filling the entire net with that lol. should be a good one! Subbed!
Devilish's Perpetual Indoor
Devilish's Blueberry Grow - Complete

Looking like plenty of space for her to do her thing, hopefully she see's her potential. I am tuned in.
Current Grow (Lemon Cheesecake, Black Cherry Soda, Sour Sunami)

I don't call it drunken Slur, I call it talking in cursive.
H

devilish said:
Welcome. Is it safe to assume you plan on filling the entire net with that lol. should be a good one! Subbed!
Click to expand...


Yes mate. I have plenty of time to top her a couple of times...so time doesn't matter. Hopefully the genetic will turn out to worth the time/effort

I've supercropped the tops. It's the first time I was doing it and I think I did a bit too much...hopefully she will recover. If not, then bye bye tops
Had a littlebit of nute burn on the tips with 0,8EC so I didn't bother to rise it up...obviously.
Here she comes 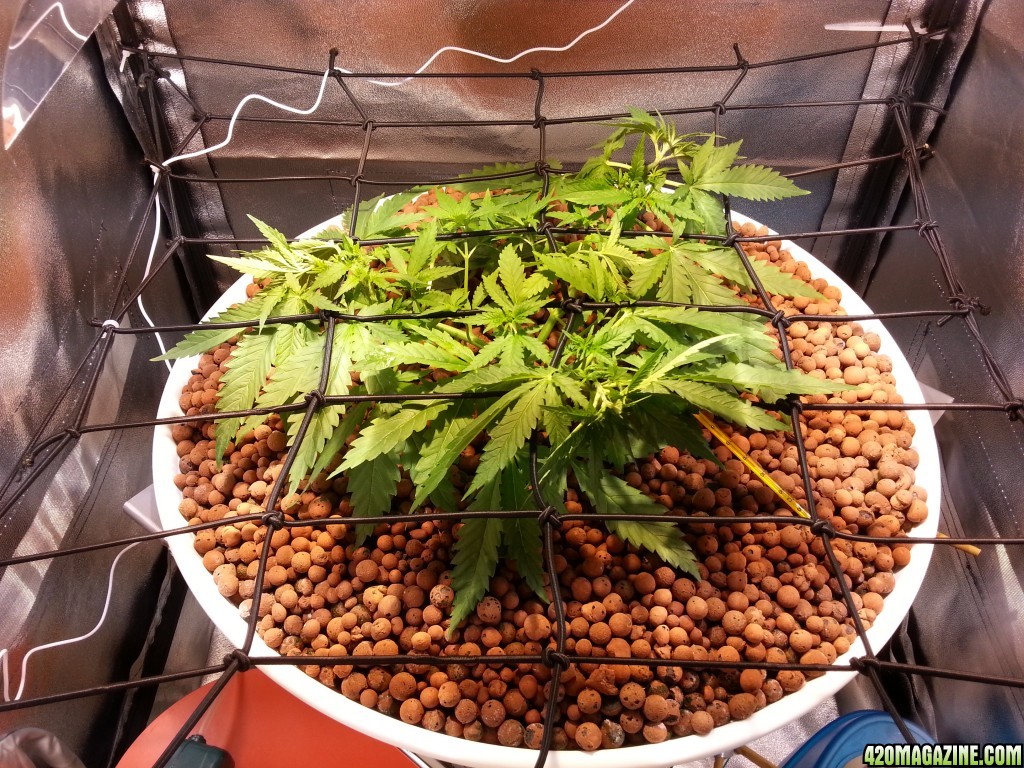 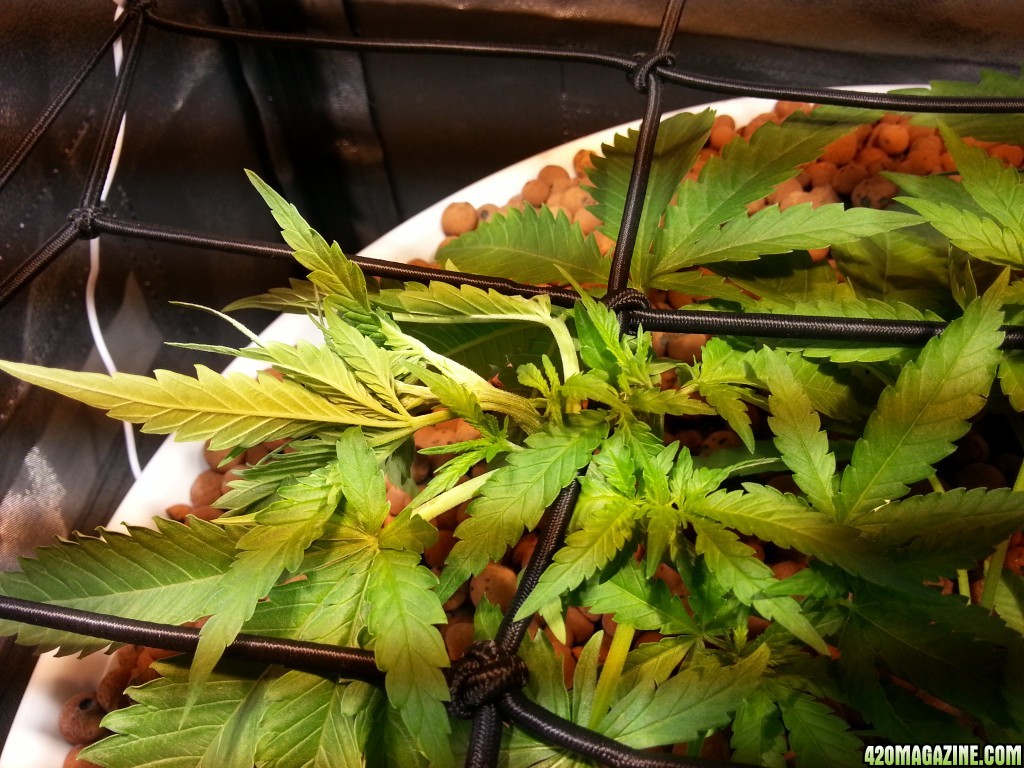 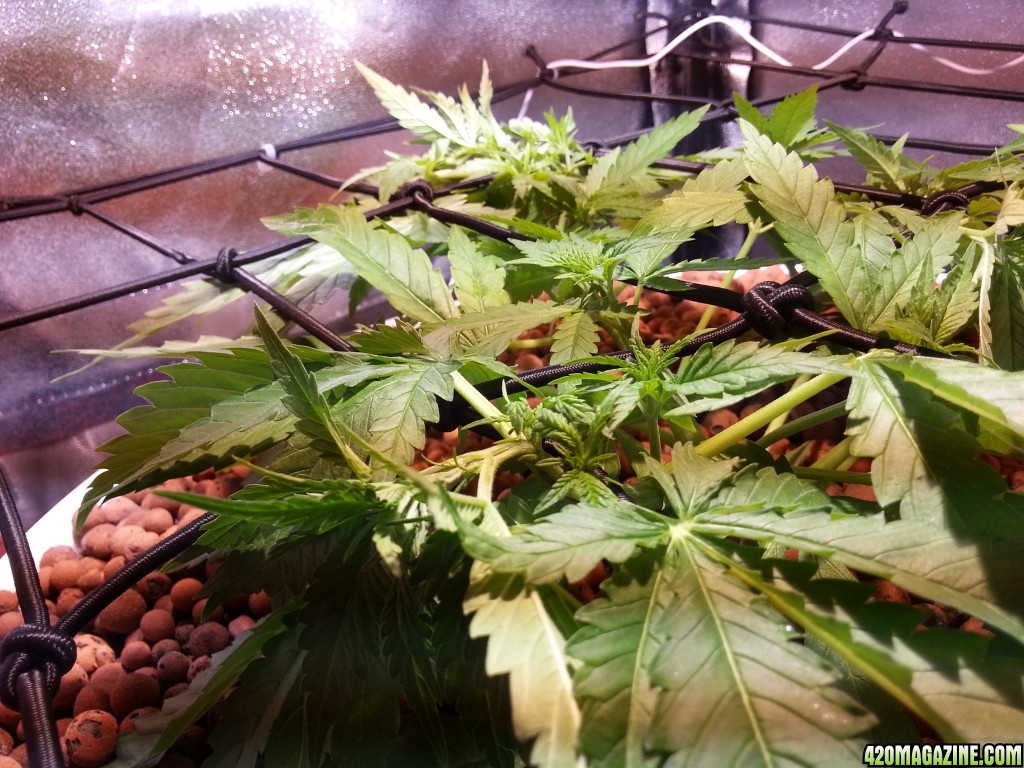 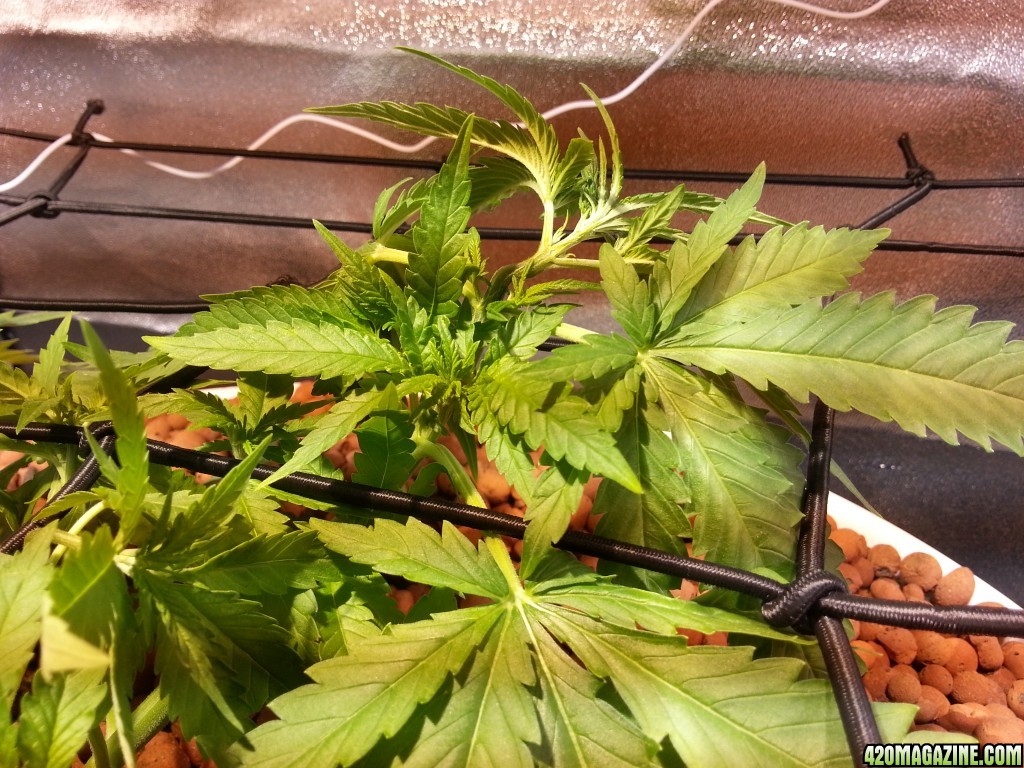 Basically I opened the inside of the stem. If I rotate it around itself I can see a whole so its completely cracked

Cannabis is a strong plant....this is what I rely on now 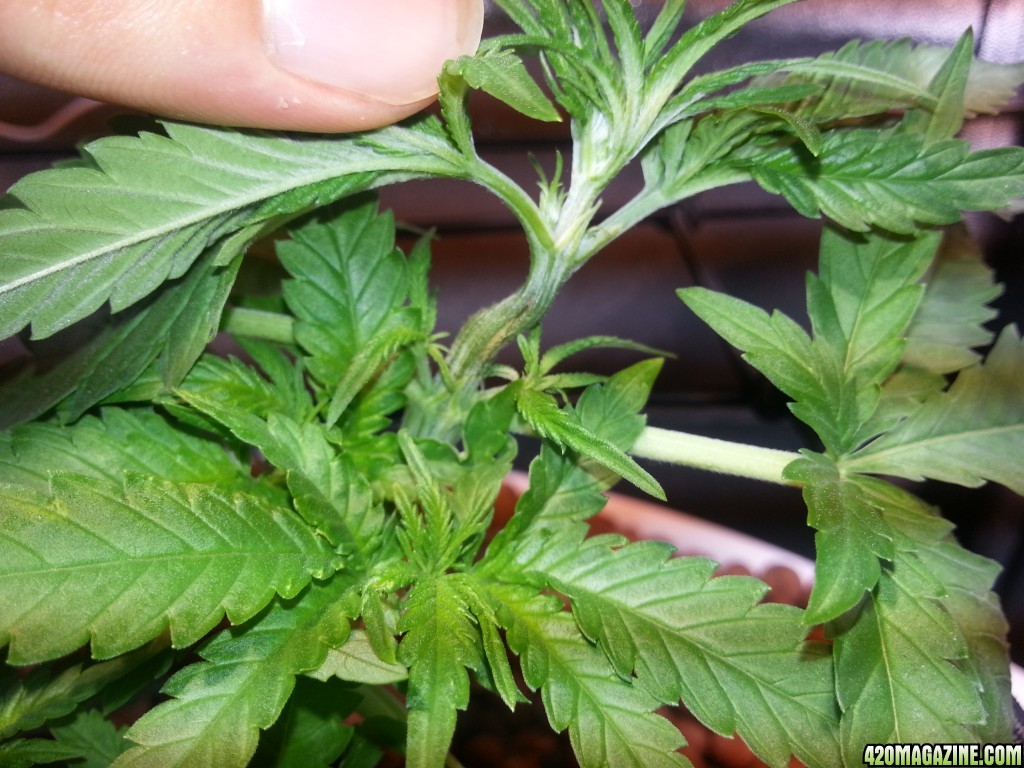 Stay tuned!
2 (maybe even less) weeks and I'll start the 12/12 cycle...meanwhile I'm going to supercop her a couple of times -even under the net - so the stems can transport moar!!! nutes to da budZ in the flowering period
The grass is greener on the other side...
H

The "nute burn" turned out to be Mg def. It's hard to see it on the picture but it looks like.
The leaf margins turned pale...with a littlebit of yellow rush. Some of the really end of the tips have burned.
I use ammonium acid as ph down. That could cause Mg lockout.Any opinion?
Tho I don't use that anymore as the nutrient holds the ph of the nut. solution. Feeding 0,86 atm...just corrected from 0,7 (2 days 0,1EC she eats) with a freshly opened micro/bloom. The stuff wasn't young...maybe that could caused this as well?
Anyway...a picture worth a ...

Edit: The crop I was afraid of...well, it was nothing to the plant

All the tops have turned upward until the light cycle
The grass is greener on the other side...
H

Edit: the nute burn turned out to be nute burn after all. Last night I gave the lady 0,86 and the yellowing got worse along with more severe tip burn. Nothing serious, but noticable.
Shes ben topped again as I ain't gonna break her every day or every second....

I have some algae...how to get rid of it? I have Florakleen but can't get H2O2

Help with? I may be able to help depending on the issue...
Devilish's Perpetual Indoor
Devilish's Blueberry Grow - Complete

Getting rid of the algae....I can not add more clay pebbles and the light makes it to the area where the clay is wet...obviously this generates algae

Buy some panda plastic or use a black garbage bag to cover all of your pot and pebbles in...Cut a hole large enough to slide over the pot and then tape it back together so it fits loosely around the base of the plant as to not choke it. Use duct tape or equivalent. My dad had the same issue in his 3'x3' flood table and once we choked the light out and prevented it from reaching beyond the base of the stalk, all algae disappeared....and if you are careful you can reuse it. or if you buy panda plastic get one of those plastic/tarp zippers so you can re use whenever at whatever stage or remove to transplant into a larger container etc...
Devilish's Perpetual Indoor
Devilish's Blueberry Grow - Complete

Unfortunately I have to end her life. Not entirely...I'll save a couple of clones to preserve the genetics. Landlord is coming for a visit. I'll change to 4 or 2 dwc bucket to save some time on filling the garden again.
So stay tuned...there will be an end of this project

I've managed to hide her. Plant looks nice and healthy. Started to drop the light cycle by 1 hour/day. By Tuesday we hit 12/12.
Since no one gives a fuck I didn't bring pictures. (no hard feelings tho I'm not a kid)
I'll post pictures if I see any interest.
Keep it green!
The grass is greener on the other side...
H 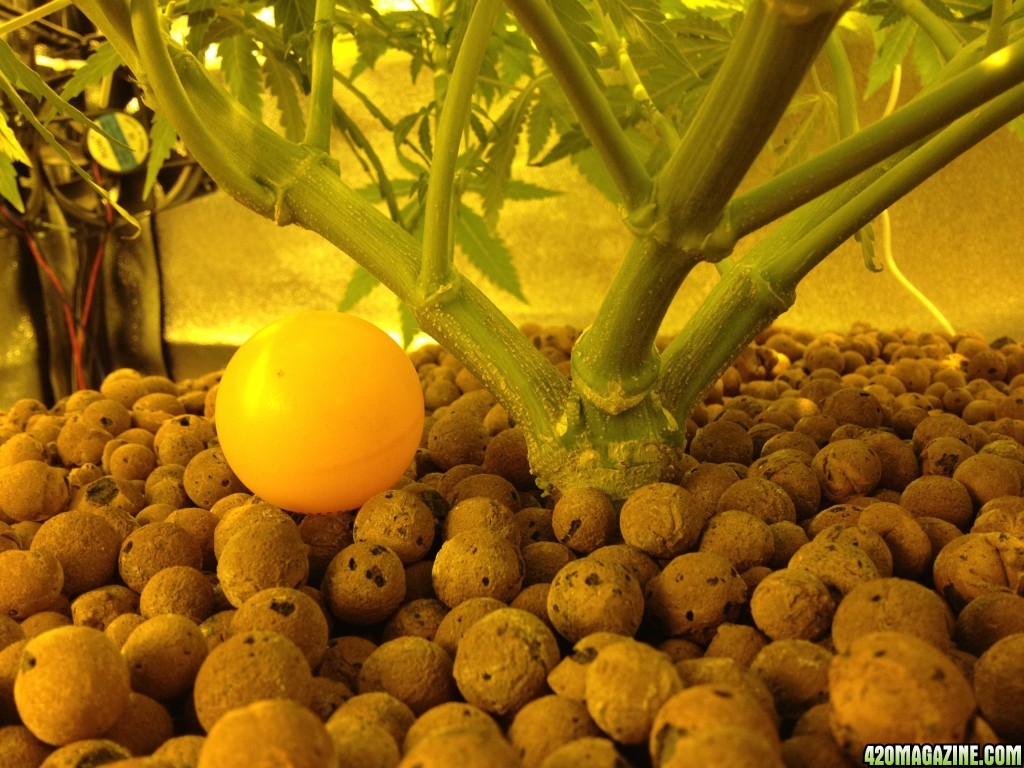 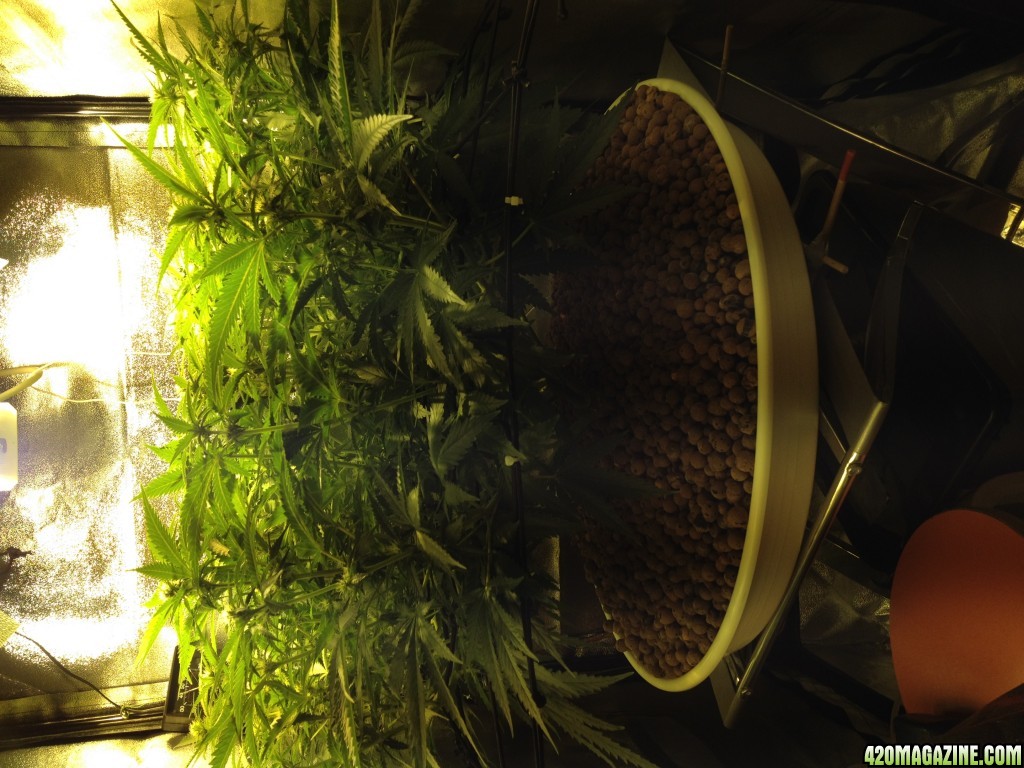 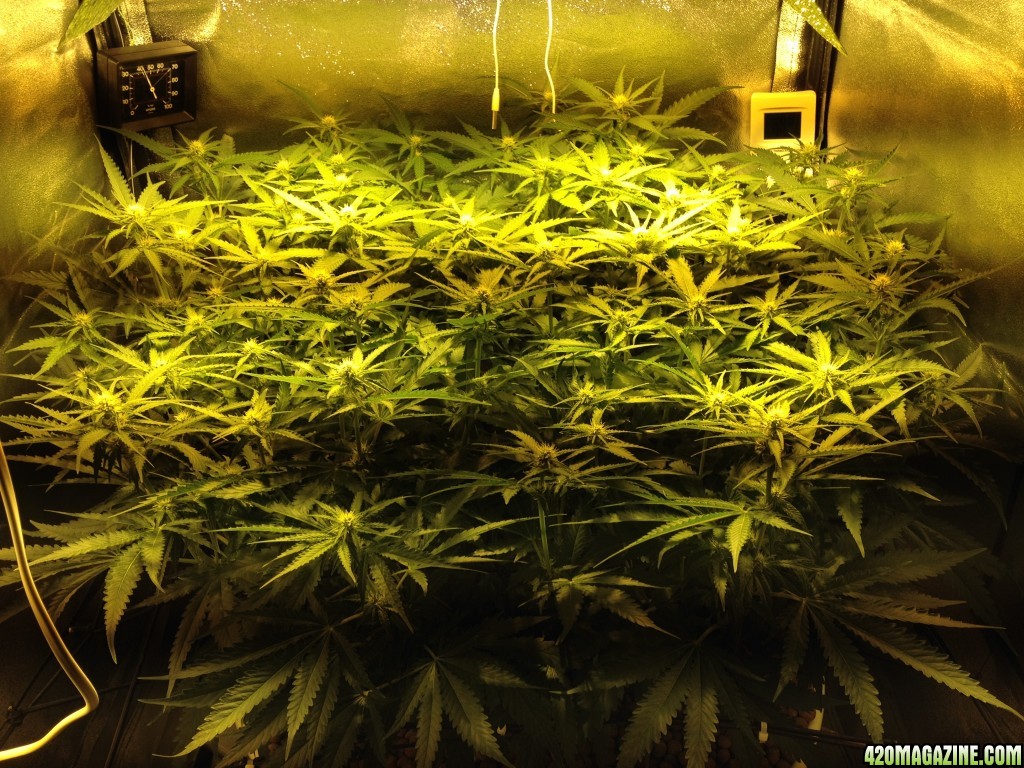 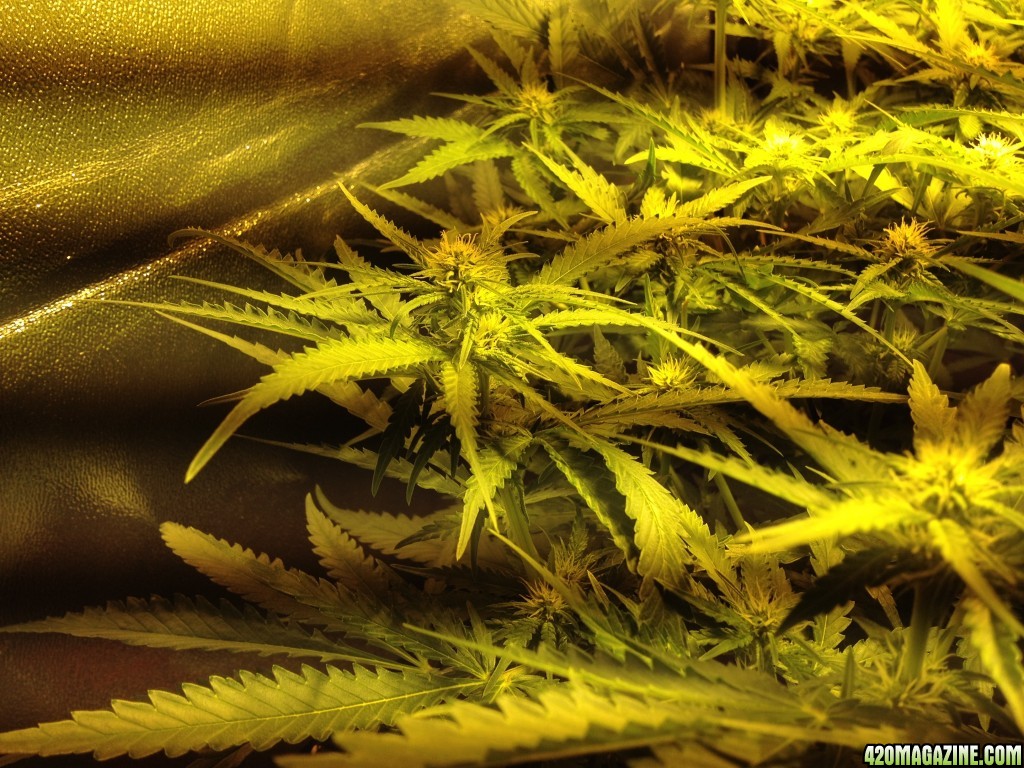 Another 8-9 week to go
The grass is greener on the other side...
H

Getting bigger and bigger. 3rd week 7th day. Tomorrow I'll use Amistar foliar spray to prevent fungus. Defoliated her a littlebit to allow the light to reach the lower buds.

A few pic's from week 5. Had a littlebit of "Amistar burn" on the pistils, that's why she looks prematured here and there.
This one is 20-22 cm and shes not alone, also shes not the biggest.

As the title says, we are pretty close to her end. 1 week maybe 1,5 left. Totally covered in buds and even the lower buds are well developed bcoz of the defoliation.
The plant is definately a sativa phenotype...I doubt it will finish in 60 days

I feed her Ripen since monday. EC 1,2 ph 5,5-5,9
Budleaves could be more heatlhy but need high ventilation....kinda afraid of mold in da jungle

So what do you think, how she looks?