In 2014 Congress passed the Hinchey-Rohrabacher Amendment, prohibiting the U.S. Department of Justice from spending federal dollars to enforce the federal prohibition laws in states where medical marijuana has been legalized – now 29 states plus the District of Columbia.

That amendment is set to expire on Sept. 30.

The amendment introduced in the House budget plan by Reps. Dana Rohrabacher (R-California) and Earl Blumenauer (D-Oregon) would similarly prevent the Justice Department from using federal funds to target medical marijuana patients and providers in states where it is legal.

Despite the growing acceptance of legal marijuana, it is still illegal at the federal level, labeled a Schedule I substance along with heroin and LSD.

The amendment was voted "out of order," and is now dead. Rohrabacher and Blumenauer said in a statement on Thursday that blocking the vote puts millions of patients relying on medical marijuana treatment at risk, and that the decision goes against the will of the American people.

"There's no question: If a vote were allowed, our amendment would pass on the House floor, as it has several times before," the statement read.

An April poll from Quinnipiac University found 73% of U.S. voters oppose government enforcement of federal marijuana laws in states that have legalized medical and or recreational marijuana.

"When an overwhelming majority of Americans oppose federal interference in state medical marijuana programs, it is unconscionable not to let their Representatives vote on whether to continue this policy," said the Marijuana Policy Project's director of conservative outreach Don Murphy in a statement.

Canada introduced legislation in April, setting up plans to legalize marijuana by July 2018.

The marijuana industry has relied on protections granted in the Hinchey-Rohrabacher Amendment, and previously the Obama-era Cole Memo. U.S. Attorney General Jeff Sessions, while admitting his department doesn't have the necessary resources, has made clear his stance on and intentions for medical marijuana.

In June Sessions wrote a letter to Congress asking that they undo protections granted by the Hinchey-Rohrabacher Amendement and allow his Justice Department to prosecute businesses and individuals in states where medical weed is legal.

Earlier, in May, Sessions sent a memo to his federal prosecutors directing them to pursue the most serious, provable offenses in charging and sentencing, which is a direct contrast to former Attorney General Eric Holder's Cole Memo that advised prosecutors against taking the most severe course of action for certain low level, nonviolent drug cases.

Some in Congress, have taken steps toward easing the government's stance on medical marijuana. In June, Sens. Rand Paul (R-Kentucky), Cory Booker (D-New Jersey) and Kirsten Gillibrand (D-New York) introduced a bill that would end the federal prohibition of medical marijuana and take steps to improve research.

Booker, in August, also introduced a bill (The Marijuana Justice Act) that would not only legalize marijuana, but expunge federal marijuana convictions and penalize states with marijuana laws that disproportionately effect low-come people and people of color.

The medical marijuana industry has a chance of retaining its protections. Sen. Patrick Leahy (D-Vermont) introduced a similar amendment to the Rohrabacher-Blumenauer in the Senate's budget bill. That amendment was approved in a committee vote in July.

"Unless Congress chooses the Senate budget version, millions of seriously ill patients and the legitimate businesses that provide them with safe access to their medicine will be at risk of prosecution," Murphy said in a statement. "This vote is a slap in the face of patients, their families, their elected representatives, and the 10th Amendment." 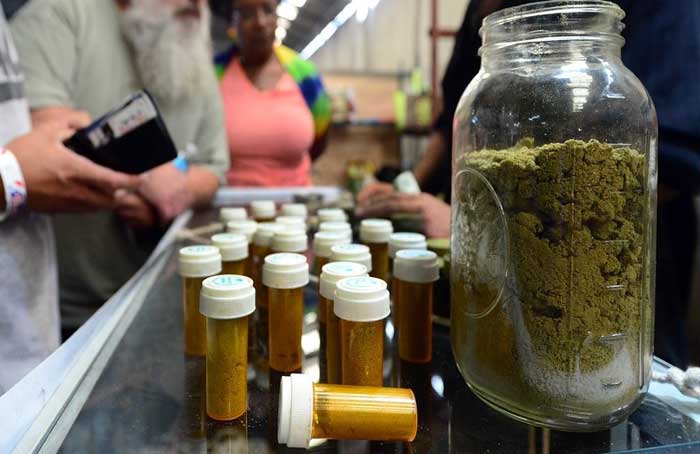 Will Congress Deliver A December Frost To Medical Cannabis In Pa. And Beyond

Even Without The Rider That Protects Medical Marijuana, A Pot Crackdown Is Unlikely