Cannabidiol (CBD), a non-psychoactive component of the marijuana plant, has generated significant interest among scientists and physicians in recent years—but how CBD exerts its therapeutic impact on a molecular level is still being sorted out by scientists. Cannabidiol is a pleiotropic drug in that it produces many effects through multiple molecular pathways.

Although CBD has little binding affinity for either of the two cannabinoid receptors (CB1 and CB2), cannabidiol activates several non-cannabinoid receptors and ion channels. CBD also acts through various receptor-independent channels — for example, by delaying the “reuptake” of endogenous neurotransmitters (such as anandamide and adenosine) and by enhancing or inhibiting the binding action of certain G-coupled protein receptors.

Here are some of the ways that CBD confers its manifold therapeutic effects.

Jose Alexandre Crippa and his colleagues at the University of San Paulo in Brazil and King’s College in London have conducted pioneering research into CBD and the neural correlates of anxiety. At high concentrations, CBD directly activates the 5-HT1A (hydroxytryptamine) serotonin receptor, thereby conferring an anti-depressant effect. This G-coupled protein receptor is implicated in a range of biological and neurological processes, including (but not limited to) anxiety, addiction, appetite, sleep, pain perception, nausea and vomiting.

5-HT1A is a member of the family of 5-HT receptors, which are activated by the neurotransmitter serotonin. Found in both the central and peripheral nervous systems, 5-HT receptors trigger various intracellular cascades of chemical messages to produce either an excitatory or inhibitory response, depending on the chemical context of the message.

CBDA [Cannabdiolic acid], the raw, unheated version of CBD that is present in the cannabis plant, also has a strong affinity for the 5-HT1A receptor (even more so than CBD).

Both CBD and CBDA trigger an inhibitory response that slows down 5-HT1A signaling. In comparison, LSD, mescaline, magic mushrooms, and several other hallucinogenic drugs activate the 5-HT2A receptor, which produces an excitatory response.

TRPV is the technical abbreviation for “transient receptor potential cation channel subfamily V.” TRPV1 is one of several dozen TRP (pronounced “trip”) receptor variants or subfamilies that mediate the effects of a wide range of medicinal herbs.

Scientists also refer to TRPV1 as a “vanilloid receptor,” named after the flavorful vanilla bean. Vanilla contains eugenol, an essential oil that has antiseptic and analgesic properties; it also helps to unclog blood vessels. Historically, the vanilla bean has been used as a folk cure for headaches.

CBD is a TRPV1 “agonist” or stimulant. This is likely one of the reasons why CBD-rich cannabis is an effective treatment for neuropathic pain.

Whereas cannabidiol directly activates the 5-HT1A serotonin receptor and several TRPV ion channels, some studies indicate that CBD functions as an antagonist that blocks, or deactivates, another G protein-coupled receptor known as GPR55.

GPR55 has been dubbed an “orphan receptor” because scientists are still not sure if it belongs to a larger family of receptors. GPR55 is widely expressed in the brain, especially in the cerebellum. It is involved in modulating blood pressure and bone density, among other physiological processes.

GPR55, when activated, also promotes cancer cell proliferation, according to a 2010 study by researchers at the Chinese Academy of Sciences in Shanghai. This receptor is expressed in various types of cancer.

CBD is a GPR55 antagonist, as University of Aberdeen scientist Ruth Ross disclosed at the 2010 conference of the International Cannabinoid Research Society in Lund, Sweden. By blocking GPR55 signaling, CBD may act to decrease both bone reabsorption and cancer cell proliferation.

CBD also exerts an anti-cancer effect by activating PPARs [peroxisome proliferator activated receptors] that are situated on the surface of the cell's nucleus. Activation of the receptor known as PPAR-gamma has an anti-proliferative effect as well as an ability to induce tumor regression in human lung cancer cell lines. PPAR-gamma activation degrades amyloid-beta plaque, a key molecule linked to the development of Alzheimer’s disease. This is one of the reasons why cannabidiol, a PPAR-gamma agonist, may be a useful remedy for Alzheimer’s patients.

CBD as a reuptake inhibitor

How does CBD, an exogenous plant compound, get inside a human cell to bind to a nuclear receptor? First it has to pass through the cell membrane by hitching a ride with a fatty acid binding protein (FABP), which chaperones various lipid molecules into the cell’s interior. These intracellular transport molecules also escort tetrahydrocannabinol (THC) and the brain’s own marijuana-like molecules, the endocannabinoids anandamide and 2AG, across the membrane to several targets within the cell. CBD and THC both modulate receptors on the surface of the mitochondria and the nucleus.

Cannabidiol, it turns out, has a strong affinity for three kinds of FABPs, and CBD competes with our endocannabinoids, which are fatty acids, for the same transport molecules. Once it is inside the cell, anandamide is broken down by FAAH [fatty acid amide hydrolase], a metabolic enzyme, as part of its natural molecular life cycle. But CBD interferes with this process by reducing anandamide’s access to FABP transport molecules and delaying endocannabinoid passage into the cell’s interior.

According to a team of Stony Brook University scientists, CBD functions as an anandamide reuptake and breakdown inhibitor, thereby raising endocannabinoid levels in the brain’s synapses. Enhancing endocannabinod tone via reuptake inhibition may be a key mechanism whereby CBD confers neuroprotective effects against seizures, as well as many other health benefits.

CBD as an allosteric modulator

CBD also functions as an allosteric receptor modulator, which means that it can either enhance or inhibit how a receptor transmits a signal by changing the shape of the receptor.

Canadian scientists have identified CBD as a “negative allosteric modulator” of the cannabinoid CB1 receptor, which is concentrated in the brain and central nervous system. While cannabidiol doesn’t bind to the CB1 receptor directly like THC does, CBD interacts allosterically with CB1 and changes the shape of the receptor in a way that weakens CB1's ability to bind with THC.

As a negative allosteric modulator of the CB1 receptor, CBD lowers the ceiling on THC’s psychoactivity — which is why people don’t feel as “high” when using CBD-rich cannabis compared to when they consume THC-dominant medicine. A CBD-rich product with little THC can convey therapeutic benefits without having a euphoric or dysphoric effect. 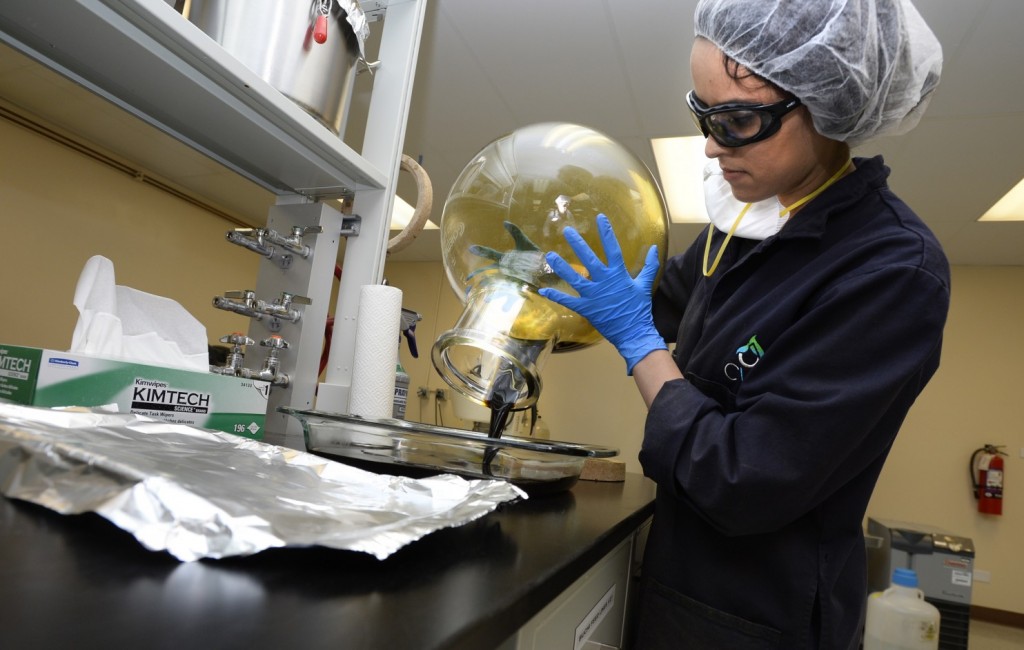 R
Cannabis, The Brain, And The Central Nervous System