How Minnesota's Medical Marijuana Program Compares To Other States

State health officials have less than a year to navigate a complex web of patient registration, drug manufacturing and distribution before getting medical marijuana into patients' hands. In Minnesota, the task falls to Michelle Larson, director of the state's Office of Medical Cannabis. Her job is to make sure the program runs smoothly enough to register patients and provide them with medication by the state-mandated July deadline.

Larson, a longtime public health worker, said she's focused on the task at hand and doesn't pay much attention to the controversy surrounding the medical cannabis rollout. "I really view myself as a public servant in public health implementing this program," Larson said. But among the 23 states where medical marijuana is legal, Larson's job is somewhat unique. Medical marijuana programs in most states are small parts of other offices, and full-time program directors like Larson are rare. The programs also vary widely in what they regulate and how many people they employ.

In Hawaii, for example, running the pot program is just one of the job duties for the head of the state's Narcotics Enforcement Division. Maryland's program is run by commission and doesn't have a director. And as Minnesota winnows a list of applicants down to two manufacturers and eight dispensaries for the drug, other states plan to license dozens of dispensaries as they roll out their programs.

The handful of medical cannabis directors across the country each bring very different experience to their positions. Larson, a Minnesota Department of Health veteran, has a resume almost tailor-made for the head cannabis job. She's a 41-year-old Ph.D. candidate in organizational leadership who's worked with large stockpiles of pharmaceuticals. Larson even has some experience in law enforcement.

But before taking her new job in August, Larson didn't focus much on the medical marijuana debates unfolding at the state Capitol in her work with tobacco-related issues. "So I was around it and I was aware of it, and it had been on my radar...[but] I had removed myself, really, from what the outcome would be," she said.

That's not the case for Bob Morgan, who runs the medical cannabis pilot program in Illinois. Before taking his new post, Morgan worked as legal counsel for the governor's office and helped draft the law that established the Illinois cannabis program. The Illinois program is spread among three different state agencies, Morgan said, so he functions largely as a "quarterback," keeping everyone on the same page while providing updates to the governor's office.

But even Morgan doesn't work full-time in medical cannabis. He also serves as general counsel for the state's public health department. Many of the other roughly 50 people working on the program also split duties between other jobs, he said. The Minnesota program will employ about 10 people full-time to oversee two medical marijuana manufacturers selected by a state panel, Larson said.

Michigan employs about 25 people in a program which only handles patient registry, and doesn't license or regulate dispensaries, which are still illegal there. "Sometimes I describe it as we just print the cards," said Carole Engle, director of the Michigan Bureau of Health Care Services. There are big differences in staffing and regulation among states with medical marijuana. But in the small world of legalized cannabis, where many programs are just a few years old, officials in different states are trying to ferret out best practices from their peers.

Michigan voters legalized marijuana in 2008, and Engle said she gets calls weekly from other states asking for advice on how to roll out a program. Larson recently traveled to Colorado to check out the medical marijuana operation there and is reaching out to other states. States like Minnesota and Illinois now entering the medical marijuana fray have an advantage, Morgan said, because they can learn from the challenges other states already faced when rolling out their programs. "You guys are going to be able to pull from those best practices just like we did, so I think you guys are in a good position to have a successful program," he said. 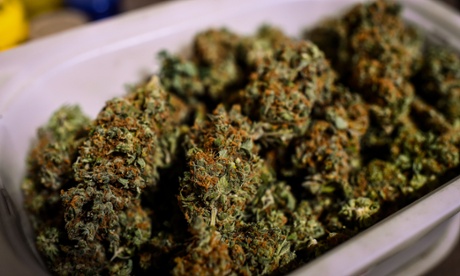