How The Booming Israeli Weed Industry Is Changing American Pot

Standing on the rear balcony of a gray factory building off the side of a highway, Tamir Gedo shields his eyes from the blazing sun. He points to the 23 acres of agricultural fields spread out before him. "We'll be able to produce more cannabis here than the entire state of Colorado," he says. Minutes later, walking past the 8,000 square-foot storage room, he adds, "We can store enough in this warehouse to supply medical marijuana for the whole United States."

With one million square feet of cultivation fields, a 35,000-square-foot production plant, and 30,000 square feet of grow rooms and labs, Gedo's company, Breath of Life Pharma (BOL), is about to open the world's largest medical marijuana production, research and development facility. According to Gedo's estimates, BOL will produce 80 tons — more than 175,000 pounds — of cannabis per year.

A tour of BOL's new facility feels like a walk through the medical-marijuana version of Willy Wonka's Chocolate Factory. With its patented extraction and purification equipment, grow rooms and germination labs, BOL will be pumping out pharmaceutical-grade cannabis tablets, capsules, inhalers and oils that are customized to treat certain ailments, with specific and controlled consistencies.

And no, this isn't happening in Colorado, California, or anywhere near America for that matter. This medical weed wonderland sits in what might be the last place you would imagine finding the world's largest facility for medical marijuana: Israel.

Over the past 50 years, Israel has become the epicenter of medical pot. Home to Raphael Mechoulam, the pioneer of marijuana research, Israel is where THC and the endocannabinoid system were first discovered. And with the world's largest number of clinical trials testing the benefits of medicinal cannabis, Israel has become the global destination for medical cannabis research and development. Now it is becoming the offshore greenhouse for American cannabis companies seeking to overcome the federal roadblocks standing in their way.

Israel was among the first countries to legalize medicinal use, and is one of just three countries with a government-supported medical cannabis program. Though recreational use remains illegal, support for legalization is a bipartisan issue, with some of the most outspoken proponents coming from the right. Until now, Israel's role in this multi-billion dollar field has been limited to R&D. Yet now that the Israeli government has approved the export of medicinal cannabis products, companies there are hoping to gain a larger piece of the market. While importing cannabis into the United States is illegal under federal law, companies can get around that ban by receiving drug approval from the FDA — and that is exactly what Israeli companies hope to do. According to the FDA, nothing is stopping them, as long as they meet the agency's arduous requirements for drug approval.

While the FDA has approved three drugs containing synthetic cannabinoids (Marinol, Syndros and Cesamet, which treat symptoms of AIDS and chemotherapy), it has never approved a product derived from botanical marijuana. According to the agency's guidelines, "Study of marijuana in clinical trial settings is needed to assess the safety and effectiveness of marijuana for medical use." Yet initiating clinical trials on U.S. soil is difficult to the point of being nearly impossible. So, American companies are increasingly taking a shortcut: beginning phases 1 and 2 of their clinical trials in Israel, after which they will complete phase 3 in the U.S., speeding up the process through which they can apply for FDA approval of the botanical cannabis drugs they are developing.

Though this level of American R&D in Israel is new, Israel's impact on the American cannabis industry is not. The very fact that medical marijuana is now legal in 29 U.S. states and counting, is a direct result of Israeli research, which essentially legitimized the study of cannabis in the international scientific community that had long stigmatized it. Without this research, "We wouldn't have the scientific interest we have now around the world," says Paul Armentano, deputy director of the D.C.-based National Organization for the Reform of Marijuana Laws (NORML). "That really opened the door to making the study of cannabis and cannabinoids a legitimate avenue for more conventional scientists and researchers."

"The seriousness with which the Israeli scientific community approaches this is incomparable," says Charles Pollack, director of the Lambert Center for the Study of Medicinal Cannabis at Thomas Jefferson University in Philadelphia. "Israel is a hotbed of quality cannabis research, because they have a much more favorable regulatory climate for doing serious scientific research on medical cannabis."

The Lambert Center is one of several American institutions that have partnered with BOL, collaborating on at least one of the more than 50 clinical trials the Israeli company will begin once its new facility is fully operational in late September. Of the 15 international companies that have already signed up to conduct their R&D at BOL's facility, at least six are American, and Gedo is in talks with more.

BOL isn't the only Israeli cannabis company benefitting from international interest. A growing number of American investors are getting on the Israeli cannabis wagon, which they see as the best vehicle for transforming the medical cannabis field, still in its infancy, into a pharmaceutical-level industry.

Israel's journey to the forefront of the medical cannabis field began with 86-year-old Israeli chemist Raphael Mechoulam, known in the field as the Grandfather of Medical Marijuana. In 1963, as a young researcher, Mechoulam secured 11 pounds of Lebanese hashish, which had been confiscated by his friend at a police station in Tel Aviv. He used that hash to identify, isolate and synthesize THC, the psychoactive compound in cannabis, for the first time in history, and study its medical uses. He was also the first to decode the structure of CBD, the plant's primary non-psychoactive ingredient. But Mechoulam's most groundbreaking discovery came in 1992, when he and his team at Hebrew University in Jerusalem discovered the physical reason humans can get high.

"It turned out that the cannabinoids in the plant actually mimic the compounds that we form in our brain," says Mechoulam, a professor and researcher at Hebrew University who works with several American cannabis companies. He and his team discovered that THC triggers the human body's largest receptor system, now known as the endocannabinoid system, and that the human brain produces its own cannabinoids — compounds that stimulate the body almost exactly the way THC does.

While Mechoulam's research is what first placed Israel on the medical marijuana map, the country's progressive attitudes toward cannabis, coupled with the Israeli government's liberal regulatory policies and the nation's technological leadership, are what have maintained Israel's status as the capital of medical marijuana research and development. It might also help that Israel has the world's highest ratio of marijuana users, according to Israel's Anti-Drug Authority, with 27 percent of the population aged 18-65 having used marijuana in the last year. That rate is followed by Iceland and the U.S., at 18 and 16 percent respectively.

Despite the fact that 95 percent of the U.S. population lives in states where cannabis is legal in some form, marijuana remains federally illegal. This policy makes conducting research into the medical benefits of marijuana notoriously difficult on U.S. soil. Researchers who wish to do so must go through the DEA, the FDA and the National Institute on Drug Abuse (NIDA). Even when American researchers are given approval, they have only one source for their material: a cannabis farm at the University of Mississippi, operated by NIDA. The process, if successful, can take years.

"There's a lengthy and arduous regulatory process for getting approval for doing studies, and limited resources at these agencies for processing those requests," says Pollack, of Thomas Jefferson University. "It's deliberately made very difficult for us." In Israel, on the other hand, a cannabis clinical trial can get off the ground in a matter of months.

"I think they have approached the issue in a more even-handed and genuine way than the U.S. government has," says Armentano of NORML. "There are onerous restrictions on conducting this research in the U.S. that don't exist in Israel."

This is precisely why many American researchers from universities and private companies are using Israel as an offshore research hub. For example, Pollack, from Thomas Jefferson University, will be conducting clinical trials at BOL's new facility. Since the trials haven't begun, he won't divulge details, but says they will focus on orphan drug indications, meaning they will be testing the benefits of cannabinoids on people with diseases that don't afflict many people in the U.S. (It also means that the clinical studies are smaller — and go faster — given that fewer patients are needed for these trials.) For that reason, he said, "Big pharma companies tend not to pursue them because there's not a big enough market for these drugs." 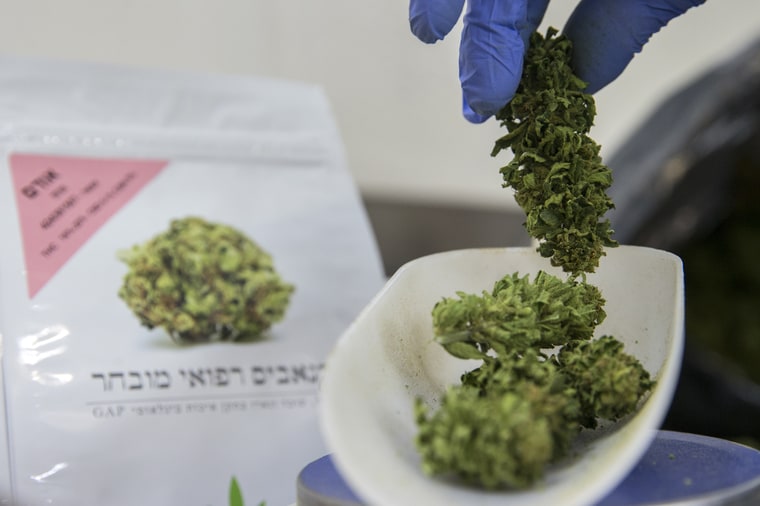