How To Get A Job In The Marijuana Industry

For anyone curious about working in the world of weed, a new resource makes job-hunting easier.

A recruiting agency for legal cannabis firms has launched a website that aims to serve as a one-stop shop for employers and job seekers. The site, Vangsters, allows hopefuls to apply to jobs and crate employee profiles, with a focus on marijuana-specific skills and software.

With eight U.S. states having legalized recreational marijuana, and 20 more allowing it for medical use, it's clear the field is set to only keep growing. And with that growth potential, many workers -- particularly those in other professions yet to see much in the way of raises -- might be looking over at a rapidly expanding industry offering a range of career opportunities.

But how should someone intrigued by the idea of working in the cannabis sector start searching, and what kind of jobs are available? Read on if you're thinking of taking a leap into the burgeoning new industry.

First, the good news. The legal marijuana business is set to add some 80,000 jobs in the U.S. over the next few years. By 2021, the direct and indirect effect of recreational and medical cannabis, including jobs at businesses that service the pot industry, will create an estimated 400,000 jobs, according to industry analysts Arcview Market Research.

Now the bad news. With legal marijuana hailed as the new "gold rush," competition for work is fierce as people from other industries try to break into the sector.

"There are more people who are interested in getting into the space than there are jobs," said Karson Humiston, CEO of recruiting agency Vangst, which is behind Vangsters. About 5,500 job-seekers have filled out profiles on the site since it went online in January, she said.

The legal marijuana industry breaks down into a few major areas: growing, retailing, infused products and ancillary services (think software development, business-to-business sales and so forth). If you're unsure where to look, thinking about these sectors and their mainstream analogs can help you figure out where to focus your efforts.

Do you have experience in hospitality, restaurants or high-end retail? Workers who've been in high-volume, customer-facing industries are in demand at marijuana dispensaries, the largest subsector in the cannabis field.

"They tend to be high-end, well-paid retail jobs," said Tom Adams, ArcView's editor-in-chief. "The cannabis industry is the classic mom-and-pop scenario. It's very labor intensive, and those mom-and-pop operators tend to pay very well to get people who are knowledgeable about cannabis and very good at interacting with a range of consumers."

Higher-end cannabis shops are luring managers away from designer apparel stores, according to Vangst's Humiston.

On the technical side, labs working on infused products, such as sweets, pizza or even gourmet food, need scientists and technicians who can help with product development and test the finished products. Then there's all the other functions that support a business: software engineers, accountants, sales reps.

"Every one of those companies needs an accountant and an executive assistant. The rules of traditional industries apply to this industry," Humiston said.

It works in "dog years"

Why would someone want to move from, say, a conventional tomato farming job to one with a cannabis grower? While the entry-level jobs aren't necessarily better, the pace at which the industry is growing means there is a much better chance of moving up quickly that a worker might have in an established industry.

The challenge for many cannabis companies in the coming years is scaling up -- growing from a customer base of a few hundred to a few thousand, or how to move from having one location to five. "When you're looking at an industry with 25-plus percent growth, the demand [for workers] is going to outstrip supply," Adams said.

On the cultivation side, someone who comes in as a plant trimmer or packager and works hard can hope for a promotion in six to 12 months, according to Vangst. One of the firm's clients worked his way up from trimming to directing a large growth operation in three years.

"It's so new, it's like you're working in dog years," said Kyle Arfsten, Vangst's head of business development. "If you have one year of experience, that counts for a lot."

Dressing the part is important for job-seekers in nearly every industry, but it's especially salient in the legal marijuana trade, where companies are eager to show they can be professional and law-abiding while distancing themselves from "stoner hippie" stereotypes.

Vangst surveyed recruiters at a job fair this year and found that they overwhelmingly judged casually dressed prospects to be less responsible, less qualified and lazier than those wearing formal clothes. So dress like you'd dress for any other job interview, which is to say, overdress.

You don't need to be a user

Obviously, familiarity with any product can help a job selling or marketing it. But that's far from a requirement in the weed business. "We're hiring people out of lots of other industries whether they're cannabis users or not," Adams said.

Some jobs, like working as a patient counselor or a budtender in a dispensary, do require a worker to know the properties of various marijuana strains and to recommend products. "You have to have some knowledge to talk to the customers, but that's just knowledge -- it doesn't have to be firsthand," he said.

The view that companies want workers with experience, but are reluctant hire people to gain that experience, applies here as well. So in the absence of applicable experience, "The best thing is doing a class," Humiston said. These can teach you more about the laws in your particular state and how to get certified in the area that interests you.

"If you take the extra step to take a compliance course, that's one less training [for your employer]," she said. "Putting yourself out there, learning and educating yourself will set someone apart."

Within the cannabis sector, cultivators are looking for people with experience in other large-scale agricultural operations, like growing tulips or tomatoes. On the retail side, people who have worked in high-volume stores or restaurants would find themselves with a leg up. That's true at all levels. For instance, managers at high-end clothing stores or restaurants are being tapped to run dispensaries, Humiston said.

It's good to be green

It's not hard to see parallels between cannabusiness and another green industry.

"We're pulling a lot of people from the solar industry," said Vangst's Arfsten. "That industry grew nearly as quickly as this one. People from that growth environment understand the need to scale, and what's required to make that happen." Experience working in startups is also valuable.

Finally, there's no shortage of professional help, with a slew of staffing and recruitment firms dedicated to helping those looking for jobs in legal weed at all levels. 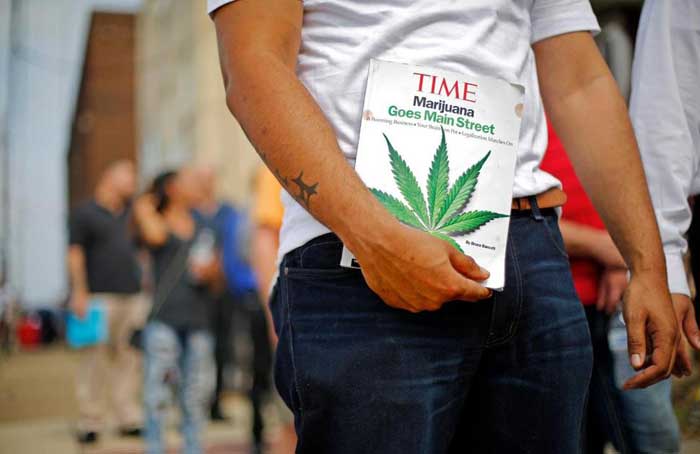 CO: Get A Job In The Marijuana Industry At This Cannabis Job Fair In Denver

This 24-Year-Old Built A LinkedIn For Weed Jobs, No Experience Required