How to turn a PC fan into an exhaust or intake fan?

Just for fun, I wanted to show how easy it is to turn a PC fan into an intake, or into an exhaust fan. The fan I am using is quite small, but the objective is still the same. The first step is to find or buy a 12v DC plug adapter. This fan here is rated at 80cfm, which will work for a small box set-up.

Simply cut the wires at the end, and strip down about a Â¼ inch of bare wire is showing.

To add another fan, just connect the wires of the same together. All black goes with black, all red goes with red. So you would still only use 2 connectors all together. Here's a few more pictures. But for the most part, I just wanted to show how simple it is. Make sure you get an adapter which is rated DC for the output.

Also a worthwhile consideration is places like radio shack and grainger also have nice 4" muffin fans that move as much as 200 cfm and more, which run on 110 vac. They come with a handy power cord that has a special connector on one end for the fan and a plug on the other end for plugging into the wall socket or humistat / thermostat.

this is how to wire pc fans to run without the computer. Does not describe how to turn it into a inlet or outlet fan.
"We can't stop here! This is bat country."

Simply turn them in a different direction. A PC Fan only spins one way, so flip the fan. If the fan spins to the left it is generally pushing air out that way. Just feel for the breeze. Where the Breeze goes, Air goes.
Let the Light Shine.

"Insanity: doing the same thing over and over again and expecting different results.

Agreed KingJohnC, I like to hear more info on this. I'll start searching

PinkyGreen said:
Agreed KingJohnC, I like to hear more info on this. I'll start searching


I don't have pics at the moment, but my room uses PC fans exclusively. Here is what I have learned:

A good way to go is to build a right-angle collector into your nominal duct radius. Something like this: 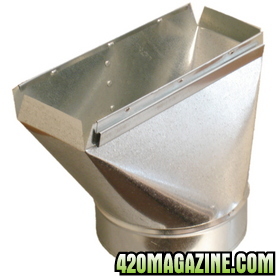 Create a template with really rigid cardboard or plywood. I paint it black with stove paint to resist moisture as well as abate reflections. These fans are good for 80cfm each, and I can fit three in this setup. It seems to offer sufficient coverage for my small room, and it runs really quiet.

How Do I Wire and Connect an In-Line Duct Fan?

Fan Controler for Under $30

How do I build a short-range timer?

Does anybody know how to wire a PC fan and a light bulb together?

How can I build my own HPS or MH light system?