It explains how Humates work and why people use them.

Without getting too deep in to it I will simply let you all read the information.

If any concerns or newer information is available please share!

The term “humus” has been known to science for over two hundred years. Humus is a transformation product of the animal and vegetable organisms’ remains, which are much more resistant to the further decomposition than the initial biomass. Dozens of hypothesises were offered to explain the process of humus formation. None of them gave an exact answer why the relentless process of dead organic matter decomposition in the soil does not come to its completion (which would be carbonic acid and water) but stops at a certain stage, when comparatively simple decomposition products, such as phenols, carbohydrates, and amino-acids transform into much more complex compounds - the humic acids.

Fig. 1. Diagram of the structure of the humic acid fragment: 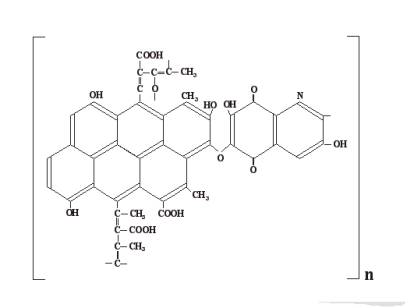 Humic acid is a substance of very complex structure (its molecular mass is 1500), which is practically insoluble in water, except for a very small part called fulfonic acids.

These fragments use hydrocarbon bonds to create molecule-forming chains, which in their natural state are rolled into a ball. These balls form large aggregates that constitute the organic part of the soil - humus.

Because of their low water solubility, biological activity of the natural humic acids is very poor.

Therefore, in order to ensure fertility of the soil, its humus content should be rather high; similar to the famous chernozem (black soils in the south of Russia).

However, the treatment of the humic acid by alkaline agents, as Lydia Khristeva did, transforms it into water-soluble salts, sodium and potassium humate.

The above illustrates how, as a result of this treatment, hydrogen atoms in carboxyl and hydroxyl groups are replaced by alkali-metal ions. As a result of the following dissociation, the humate molecule acquires a charge. These charges are located throughout the molecular chain. The charge-charge repulsion takes place, and the ball unrolls, allowing the humic acid molecules to pass into solution and to become biologically active. Each functional group shown on the fragment has its own function. There are many of these groups, therefore the influence of the humates on all stages of plants’ growth and development is versatile. For example, carboxyl (Ã‘ÃŽÃŽÃ) and phenol (OH) groups are able to form chelate complexes with microelements and transport them into plants in this form. They also provide a high ion-exchange capacity of these compounds. Other groups, which are called quinones (Ã‘ÃŽ=Ã‘ Ã =ÃŽÃ‘), contain non-localized charges, which are able to capture and accumulate solar energy. At the right moment, when a vegetable cell needs it, electrons supply the energy to the cell and increase the cell’s own energy. These two particular examples illustrate only partially the humates’ influence. An important role is played not only by the existence of functional groups but also by their mutual location. Nature made sure they were located in a way that allowed the humic acids and ions of metals to interact in the most optimal direction for plant development.

Analyzing the results of research conducted by different scientists, we were able to create a diagram of the humates’ effect on a complex system water-plant-soil. (See Fig. 2.)

We determined 16 factors of the humates’ effect, and each of them, independently from the others, leads to a certain result. As a pianist touches the piano keyboard and creates a beautiful melody, the humates influence the plants during their different growth stages, which leads to wonderful results. It is no coincidence that the leading Russian soil scientist, Professor Dmitry Orlov, considers humic acids a connecting link in the evolution of animate and inanimate matter.

Fig. 2. Diagram of interaction of the humates and the system water-plant-soil: 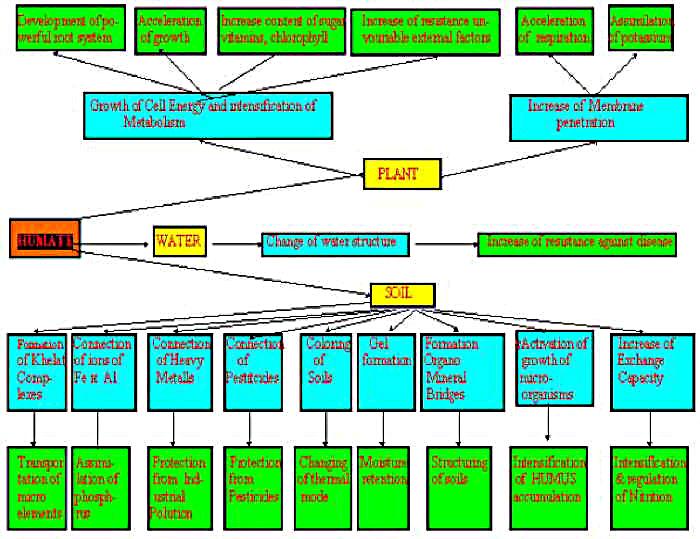 Let’s look at the simple system humate-water. The research carried out at Irkutsk University (D. A. Kalabin, D. F. Kushnaryov) found the dependence in NMR spectral parameters of water, its structure, and concentration of the humates dissolved in it. When the concentration of the humate reaches 0.005-0.009% (this particular concentration is recommended for watering plants), 17ÃŽ signal increases from 52.7 Hertz to 103 Hertz, which indicates structurization of water.

Fig. 3. The connection between value of NMR signal and humate concentration: 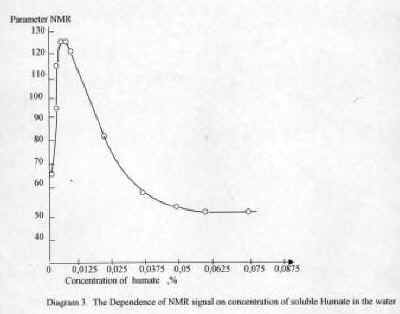 The course of the curves in Fig. 3 shows that the humates cause water to obtain the structure of melted water (previously frozen), which is known to have a medicinal effect on animate organisms and plants.

The system humate-plant can be characterized by two independent processes that are very important to plants’ growth and development. The first process is the increase in the cell’s energy and the intensification of ion-exchange process as a result of it. Nature made sure there were quinoid groups in a humic acid structure. Electrons of the four conjugated p-bonds are able to capture a quantum of solar energy accompanied by a transition to a higher energy level. They accumulate the energy and supply it to the cell when needed. It intensifies the ion-exchange process. As a result, the root system develops more rapidly, and special ferments form to improve the plants’ resistance to unfavorable conditions, such as drought and frost. These ferments also assist the process of nitrogen assimilability that does not lead to the formation of nitrates. At the same time, the synthesis of chlorophyll, sugars, vitamins, essential amino-acids, and oils accelerates.

The second process is the increase in penetrability of the cell membrane. (T. L. Senn and A. R. Kingman, 1973.) It facilitates the penetration of nutrients into the cell and accelerates the respiration of the plants. It is important to point out that this process is rather elective. For example, the penetration of potassium ions increases a hundred times while sodium penetration increases ten times, which favorably influences plants’ nourishment.

A particularly large number of processes can be observed in system humate-soil. The humic acids are natural complex generators. All essential microelements, being the variable-valence metals, form chelate complexes with the humates. This is a determinant for plants’ nourishment. As for heavy metals, such as lead, mercury, chrome, cadmium, and others, their penetration into fruit and further into the human and animal organisms leads to serious illnesses. The humates form insoluble compounds with heavy metals, which creates the barrier for their penetration into the cell. With the use of space photography, it was established that the regions with soil rich in humates have higher ecological balance in spite of the intensive technogenic pressure. Another important quality of the humates is their ability to bond iron and aluminum ions into complexes, since their excess amount in soil results in poor phosphorus nutrition of the plants. Iron forms complexes with the humates, which ensures its transportation to the plants, while aluminum creates insoluble compounds with the humates, which neutralizes damaging effect of aluminum on phosphates. Long-term wide scale experiments have been conducted in Russia, which showed that humates neutralize the negative effects of residual amounts of pesticides (atrazine was used in tests). It ensures good crop capacity and ecological purity of the product. For the countries with cold and moderate climates it is very important that the humates have the ability to change the color of soil to a darker color. Forming the coloring, the humates change thermal conditions. For instance, cold clay soils become warmer. Colloidal structure of the humic acid and the high level of hydrophilicity of terminal functional groups give them the ability to gelatinize. That is how many researchers explain the increase in soil water retention after the humate treatment. This is particularly important for drought-afflicted regions.

We have already mentioned the important role of interaction between the humates and metals, which results in formulation of complexes and insoluble salts. It was discovered that this process is very important not only for nourishment of the plants but also for soil structuring. The humate reacts with potassium, magnesium, aluminum, and iron that are always present in soil, and forms organomineral bridges that bond mechanical particles of the soil into a life-sustaining structure for microorganisms. This structure is capable of withstanding erosion, retaining water and air, and creating favorable conditions for the existence of the microorganisms. It is no coincidence that all researchers have noted the increase in the activity of all types of soil microorganisms with the presence of the humates. Efficient functioning of microorganisms is the vital part of humus formation. That is why the humate treatment is the only effective measure to restore the fertility of soil emaciated by intense exploitation, as well as soil that has not been originally rich with humus.

Note that the humate molecules, which entered the soil structure as described earlier, contain a lot of functional groups capable of ion-exchange reactions. Therefore, the soil’s ion-exchange capacity dramatically increases in their presence. Humates in soil are a treasury where nutrients are stored and supplied to the plants when needed.

Concluding my remarks to the presented information, I’d like to point out that the acknowledged 16 factors are not the results of purely theoretical preconditions. Both laboratory analysis and wide scale field tests experimentally proved each of them. Naturally, in all cases there has been a general effect of direct increase in crop capacity, quality of the agricultural product, and the ecological purity.

Source - The Theory Behind Humates
Last edited by a moderator: May 17, 2014
I would die if I did not have this proper medical treatment. My life is more valuable than rules or laws that keep me from being healthy.

Thanks Rico's , can you sticky as well please? <3
I would die if I did not have this proper medical treatment. My life is more valuable than rules or laws that keep me from being healthy.

Another thing that humic acid can be used for is those with high chlorine or chloramines in their tap water, by adding just a little humic acid, the humic acid will neutralize the chlorine and chloramines rendering them harmless to the microbes.
Click to expand...


Awesome info!
I would die if I did not have this proper medical treatment. My life is more valuable than rules or laws that keep me from being healthy.

Another thing that humic acid can be used for is those with high chlorine or chloramines in their tap water, by adding just a little humic acid, the humic acid will neutralize the chlorine and chloramines rendering them harmless to the microbes.
Click to expand...