'I Smoked With A Cop:' Occupy Minnesota Activists Accuse Police Of Getting Them High

Police are usually known to go after drug offenders, but according to some Occupy activists in Minnesota, state troopers had offered them marijuana to observe their behavior as part of an impairment study.

The allegations documented in a 35-minute YouTube video surfaced during a Minneapolis City Council meeting on Wednesday.

The video put together by Communities United Against Police Brutality and other groups focuses on protesters who were allegedly picked up by officers at Peavey Plaza on Nicollet Mall.

The footage, however, does not show law enforcement agents actually handing out drugs to activists.

'I smoked with a cop,' an activist who goes by the nickname Panda said in an interview, adding that it was 'some of the best s*** I've had in a while.' Panda went on to say that police then bought him a double cheeseburger at McDonald's.

Interviewed hours later after he sobered up, Panda said police offered him a quarter-ounce bag of marijuana if he would become an informant.

Another young man said officers had him roll a joint of marijuana in the back of a squad car and told him to 'hold it down, underneath the window.'

He added that the officers 'behaved like drug dealers.'

According to CityPages, one man told filmmakers he was given a bowl filled with weed by a state trooper, and was then let loose in downtown Minneapolis.

The intoxicated activist had proceeded to climb to the top of a large billboard near Peavey Plaza, sitting 15 feet above the sidewalk, swinging his arms and legs.

The man said that on another occasion, officers expressed disappointment that he was only high on marijuana, and said that they are looking for someone to do something stronger like meth or cocaine.

'I've never told a cop this before, but I said "F*** you, I don't touch that,"' the man allegedly responded.

On Thursday, Lieutenant Eric Roeske, of the Minnesota State Patrol, said that there has been no evidence to substantiate any of the allegations, and no complaints have been filed.

Under the Drug Recognition Evaluator program, administered by the Minnesota State Patrol, police learn to identify people who are under the influence of drugs, according to Minnesota Star Tribune.

Roeske said the typical procedure is to find people who are already intoxicated and then examine their capabilities.

However, Occupy activists have alleged that when police could not find any high test subjects, they would lure potential participants with drugs, cigarette or food.

The intoxicated activists were later taken to a Department of Transportation facility in Richfield for testing.

'They gave me a full bag of weed,' Forest Olivier said during City Council testimony on Wednesday. 'And they gave me a pipe to smoke it out of.'

Olivier said police told him they were trying to test people for 'signs' of intoxication, such as dilated pupils and smell. He added that they gave him a urine test.

Roeske said Sergeant Riccardo Munoz, who is in charge of the training program, assured him it is against policy and procedure for police to offer people drugs.

'To his knowledge, none of that activity has taken place,' Roeske said. 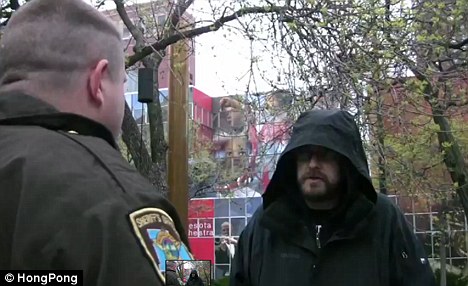 T
'I Smoked With A Cop:' Occupy Minnesota Activists Accuse Police Of Getting Them High