If The Pot Doesn't Worry You, The Bacteria Might: Food Safety A New Frontier

Denver - The marijuana in those pot brownies isn't the only thing that can potentially make consumers sick. The industry and regulators are taking a closer look at how pot-infused edibles are actually made. The thriving edible marijuana industry In Colorado is preparing for new testing requirements – due to take in effect in October – to make sure the products are safe to eat and drink. While consuming too much of an edible has been connected to at least one death and a handful of hospital visits since retail recreational sales began in January, officials say there have been no reports of anyone getting a food-borne illness from edibles.

Still, activists, producers and officials agree that safety testing is long overdue for a sector of the new pot market that, according to one industry estimate, has seen the sale of at least 8 million pieces this year. Food safety testing is necessary "to building any sort of credibility for the industry ... to create that public confidence that we're not just a bunch of stupid kids throwing marijuana into cookies and putting them on the market," said Jazzmine Hall-Oldham, general manager of Bakked, which makes cannabis concentrates and pot-infused chocolate bars.

With federal help in regulating production nonexistent because the drug is illegal under federal law, state and local governments have had to assemble a patchwork of health and safety regulations for foods with cannabis. The agency that regulates Colorado's marijuana industry, the state Department of Revenue, requires pot manufacturing facilities to meet the same sanitation requirements as retail food establishments, including adequate hand-washing and refrigeration.

But the question of whether the state's 51 licensed recreational edible-pot makers meet those standards is left to local health departments, said agency spokeswoman Natriece Bryant. State regulations requiring them also to pass tests for common food contaminants – such as E. coli and salmonella – don't take effect until the fall. In Washington state, where retail sales don't begin until next month, regulations call for edible pot products to undergo "microbiological screening," though regulations don't set standards on what microbiological agents are prohibited.

Products will have to qualify for a state-issued "Class A" label in order to be sold at stores. For now, it's a case of buyer-beware when eating foods including cannabis. In Denver, where most of Colorado's edible-pot producers are located, health officials have been meeting with the businesses to explain new city requirements that edible marijuana processing facilities get inspected at least twice a year, the same as restaurants.

Denver's manager for food safety inspections, Danica Lee, showed about 50 industry workers examples of bad food-prep sanitation – bottles of bleach on the food-prep surface and improperly stored utensils – and warned that they could face steep fines or even lose their licenses if they fail repeated inspections. "We're treating your industry like any other subset of the food industry," Lee told the edible pot makers. Hall-Oldham and other processors at the meeting seemed to welcome stricter oversight. Josh Fink, a former pastry chef who owns Medically Correct, which makes cannabis-infused candies and protein bars, said most of the people who are getting into the edibles business don't have a food preparation background. "They might know how to make four muffins at home but not 40,000 muffins at a time. That's where the training comes in," he said. 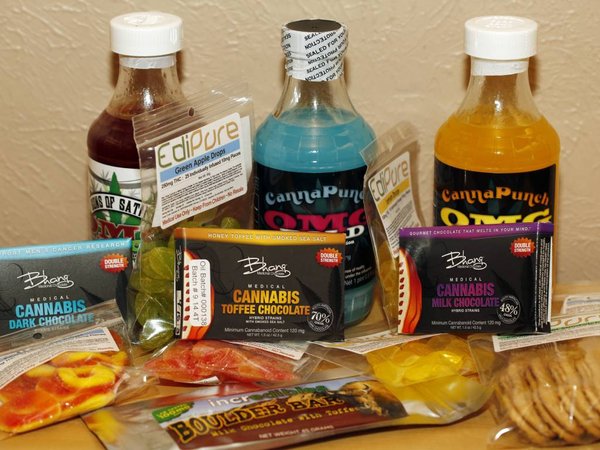 "to building any sort of credibility for the industry ... to create that public confidence that we're not just a bunch of stupid kids throwing marijuana into cookies and putting them on the market," said Jazzmine Hall-Oldham, general manager of Bakked, which makes cannabis concentrates and pot-infused chocolate bars.

If this market wants the public to take them seriously, I would suggest updating product names and labeling. I mean, do the names of the products all have to be a play on weed?