Revolution Enterprises' two Illinois medical marijuana cultivation facilities – each about the size of five Millennium Park ice skating rinks – are allowed under their state license to get much, much bigger.

But with retail sales of medical marijuana in the state only topping about $9.3 million last month, the program doesn't reach enough patients to justify an expansion, Revolution CEO Mark de Souza said. In fact, those two facilities, which together cost about $40 million to build, are only operating at roughly 28 percent of capacity.

"Current market conditions just dictate that we have to operate as lean as possible, assuming extremely slow growth in the overall market," de Souza said. "We can't plan any other way, and that's what makes being a businessperson in this industry a little more challenging."

More than two years after medical cannabis became available in Illinois through a pilot program, the number of patients allowed to buy the drug is still too low for some operators to recoup investments. That is not because there are not enough potential patients – it's because of constraints state law imposes on the growth of the program, operators say. But with candidates for governor discussing medical and recreational marijuana on the campaign trail and a bill introduced in the General Assembly that would allow patients who qualify for prescription opioids to access medical cannabis, 2018 could see changes that eventually give more patients access.

And reaching more patients is something operators have hoped for. Illinois' program has about 29,900 qualifying patients, according to the Illinois Department of Public Health, which oversees the program. Dispensaries have racked up about $123.6 million in retail sales since they started opening in November 2015, with about $86.2 million of those sales in 2017.

Illinois residents must have their doctors certify that they have at least one of 41 qualifying conditions, including AIDS and cancer, to access medical cannabis. They must also complete a fingerprint-based background check within 30 days of submitting an application for the program, and they can't ever have been convicted of a felony.

Unlike other states with medical cannabis programs, Illinois doesn't give access to chronic pain patients. Operators say making marijuana available to pain sufferers who now must depend on opioids would provide serious relief and help curb opioid addiction, which Illinois officials have warned is the state's most dangerous public health issue.

Eventually, it could drastically expand the state's medical cannabis pilot program, which is set to expire in July 2020.

"You can't flip a switch and make it happen overnight, but if this legislation were to pass, all of us would definitely expand," said Ross Morreale, co-founder of Ataraxia. The company owns one cultivation facility and co-owns dispensaries in Effingham, St. Charles and Chicago's Norwood Park East neighborhood.

Morreale pointed to Arizona's program as an example of the growth potential. Chronic pain is the qualifying condition for more than 128,500 of the roughly 151,500 patients enrolled in that state's program.

Ataraxia's cultivation facility in the southern Illinois town of Albion sits on about 16 acres, Morreale said. Like Revolution, Ataraxia could expand if there were greater demand. Other cultivators likely could too, said Morreale, who also serves as chairman of the Medical Cannabis Alliance of Illinois.

"The current cultivators have plenty of capacity to have a market with at least 10 times as many patients, without question," he said. "That's what we all expected."

But even if the opioid bill passes in 2018, it could take time for patient numbers to increase, Morreale said. The limiting factor would be how fast the Department of Public Health could process patient applications, he said. As written, the bill would require the department to approve or deny applications submitted for access to marijuana as an alternative to opioids within 14 days.

The state's medical cannabis program currently processes about 400 applications a week, plus another 250 card extensions, according to the Public Health Department. The law currently gives the department 30 days from receipt of a completed application to approve or deny it, though that is expedited for patients who are terminally ill. More than 90 percent of applications submitted contain errors that must first be addressed, the department says.

The department has increased staffing as patient numbers have grown. The program has two temporary employees and nine full-time employees, with an additional three positions currently being filled.

The department needs more staff members before it can expand the program, said Missy Sadowski, a patient advocate at The Healing Clinic, a Chicago-based advocacy center that certifies patients for the program and helps them sort through the application process.

The clinic gets calls from chronic pain patients every day who often are frustrated they can't access an opioid alternative, Sadowski said. The patients who can access the drug typically wait two to three months to receive their medical cannabis cards, she said, adding that even with the expedited process for terminally ill patients, it is taking too long.

"I've seen terminal patients that have died before the card even comes in the mail," she said.

Illinois lawmakers also introduced a bill last year to legalize recreational use of marijuana. Cook County commissioners voted last month to put an advisory referendum on the March primary ballot that asks whether recreational marijuana use should be made legal for adults in Illinois.

The state will need to ramp up its medical program before making recreational marijuana legal so no one – including operators and law enforcement – is ambushed, said Jeremy Unruh, director of public and regulatory policy at PharmaCann, which operates cultivation centers in Dwight and Hillcrest and dispensaries in Schaumburg, North Aurora, Evanston and Ottawa.

"It's going to be really hard to go from a market that serves (29,900) patients to a market that can serve potentially hundreds of thousands of people," Unruh said. "There's going to have to be movement."

When medical marijuana dispensaries started opening more than two years ago, operators expected the program's 39 qualifying conditions would just be a starting point. Only two conditions have been added.

Lawmakers passed legislation in 2016 that extended the pilot program – originally set to expire at the end of 2017 – but also changed the way qualifying conditions are approved. Originally, an advisory board composed of patients, medical experts and advocates vetted the conditions that people petitioned to be added, and then the director of the Department of Public Health decided whether to approve them.

The legislation eliminated the board's role, putting approvals solely in the hands of Director Nirav Shah, who hasn't approved any additional qualifying conditions since. Post-traumatic stress disorder and terminal illness were added to the original list of 39 conditions as part of the 2016 legislation. The department declined to make Shah available for comment.

Illinois was one of the first states to go online with such a highly regulated medical program, and while operators knew there would be challenges, the program has stagnated in some ways, Unruh said.

Though the drug is still prohibited on a federal level, other states' medical cannabis programs are picking up speed. Operators broke ground recently on the first cultivation facility in Ohio, product became available in Maryland at the beginning of December, and New York lawmakers have made changes some say will help the state's program expand.

"Everybody has caught up," Unruh said. "And it's too bad because we had a great head start."

De Souza, from Revolution, said that outside pressure could propel Illinois to get up to speed. He has seen investors getting more aggressive because of the industry's growth on the national level.

The first publicly traded medical cannabis-focused real estate investment trust went public about a year ago. Constellation Brands, whose Chicago-based beer division is known for selling Corona, announced in October that it would pay nearly $200 million for a minority stake in a publicly traded medical pot grower based in Canada.

Revolution has received offers totaling $100 million to use its management teams in new markets or to co-invest in existing operations, de Souza said. The company is looking to sell and lease back both its Delavan and Barry cultivation facilities to free up capital and has received offers of $10 million to $15 million per facility, he said.

But de Souza said he has seen other investors who are still "a year or two away from even wanting to have exposure to Illinois" because of the program's slow growth.

"Unless something changes legislatively, either making the program permanent or the state (legalizing recreational use), Illinois is not the most favorable investment state," de Souza said.

The election of a new governor could change that.

The Democratic candidates largely have been supportive of expansion. J.B. Pritzker and state Sen. Daniel Biss, of Evanston, would both support legalizing recreational marijuana in Illinois, and Chris Kennedy has said he supports expanding access to medical marijuana. Bob Daiber said in an October debate that he'd be willing to approve a law legalizing weed if voters passed a referendum showing support. Tio Hardiman said he wasn't sure he would fully support legalization.

Though Gov. Bruce Rauner signed a bill decriminalizing the possession of small amounts of marijuana, he has vetoed measures that would have extended the medical cannabis program and said recently that legalizing recreational marijuana would be a mistake. Rauner's Republican opponent, state Rep. Jeanne Ives, of Wheaton, said in a December interview with WFLD-Ch. 32 that it would be "ridiculous" for Illinois to try to build an economy on recreational marijuana, and she voted against the 2013 bill that created the medical cannabis program.

The fact that the candidates are discussing marijuana at all could help raise awareness of the program, said Paul Chialdikas, vice president of sales and marketing at Bedford Grow, which owns a growing facility in Bedford Park and dispensaries in the Brighton Park neighborhood and in Springfield.

There are residents who don't know the state even has a medical cannabis program, Chialdikas said. Though the law allows dispensaries to advertise to consumers, cultivators cannot.

"The more people talk about it, the acceptance level is going to be higher," Chialdikas said. "People will look at it and say, 'Let me look into this category.'"

He said that while the industry is moving in the right direction and continues to add patients – about 1,500 in December – growth is slower than expected. About 18,300 patients walked into a dispensary and bought product in December.

Whatever happens in 2018 with the governor's race or pending legislation, it's time for the industry to move forward, PharmaCann's Unruh said.

"We want to make this industry better, and we want patients to be able to access our products responsibly," he said. "We think we've earned that." 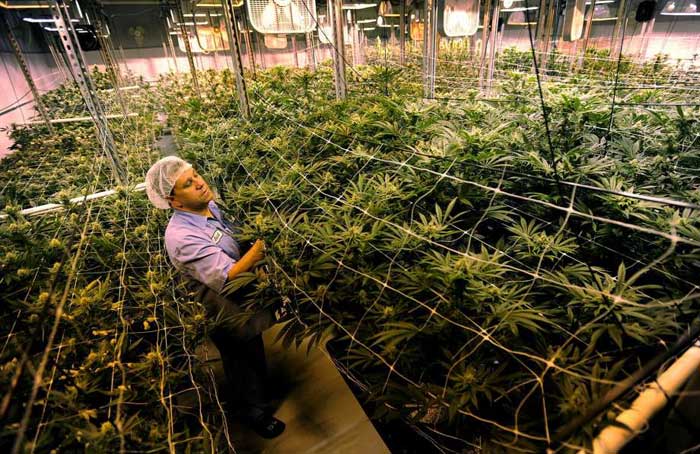