Chicago — Illinois regulators have disciplined a doctor who they say misled potential patients by offering preapproval for medical marijuana through a Chicago company called Good Intentions — a business that's carrying on its work with patients and plans to have a float in the city's Thanksgiving parade.

Dr. Brian Murray will be on probation for at least two years and has been fined $10,000, according to a consent order signed last month and released Wednesday by the Illinois Department of Financial and Professional Regulation, the agency that oversees doctor licensing.

Phone messages left for Murray's attorney weren't immediately returned. The doctor agreed to the discipline without admitting any wrongdoing, according to the consent order. Murray can continue to practice medicine, but must meet with a monitor who will review some of his patients' charts, including anyone he certifies to use marijuana.

The case underscores the hard line Illinois regulators plan to take on physician involvement in the state's new medical marijuana program. State law requires a doctor's written certification before a patient can use marijuana and a "bona fide" doctor-patient relationship, including an exam. Doctors can't accept payments for the marijuana certification itself, only for the treatment and care they provide.

When the department filed its complaint against Murray, it put out a news release warning other doctors against setting up medical cannabis clinics.

Still unclear is how long the relationship between a doctor and patient must be to meet regulators' approval.

Tammy Jacobi is CEO of Good Intentions Medical Marijuana Services, where Murray once worked. She said the business is referring patients to six other doctors now and has helped more than 600 patients with their applications for the medical marijuana program, charging each patient a $159 consultation fee. About half those patients have asked for help finding doctors who would consider certifying their marijuana use. Some don't have doctors, she said. Others have doctors who aren't comfortable with marijuana.

"Instead of having a doctor right in our office for a patient to see, we found different doctors in different specialties who are willing to accept referrals from us," Jacobi said. "We stay out of how often the doctor wants to see the patient." She wouldn't name any doctors involved with the referrals. She said no money changes hand between Good Intentions and the doctors.

The company will have a float in Chicago's parade Thursday, Jacobi said. Philip Purevich of the Chicago Festival Association, producer of the McDonald's Thanksgiving Parade, confirmed the company has a parade float.

"I wasn't familiar with the original complaint allegations," Purevich said when told of the disciplinary action against Murray. He declined to comment further. 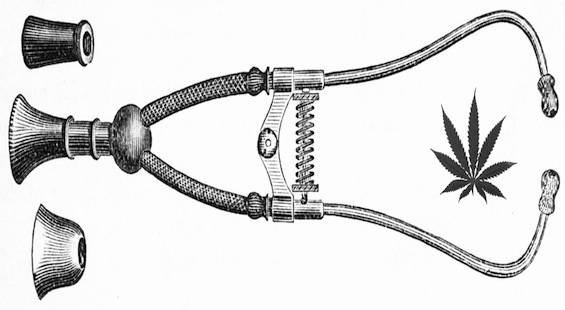