The Illinois House sponsor of prior efforts to legalize medicinal use of marijuana has already renewed efforts in the new General Assembly.

A medical marijuana bill was the first House legislation introduced Wednesday in the new legislative session. It is sponsored by state Rep. Louis Lang, D-Skokie.

"We have a new General Assembly, new people, new thoughts, new views of these issues," Lang said Thursday. "We have national polls showing that the vast majority of Americans think people ought to have a product that their doctor thinks they ought to have."

"The idea that we would approve marijuana to help very sick people feel better should not be as controversial as it is," he said.

Under the proposed law, certain patients could obtain medical-grade marijuana from state-regulated dealers for use in their homes.

Lang has been trying for four years to get approval for a medical marijuana law in Illinois.

In the past, Republicans led the charge to kill the legislation.

Lang said the House nearly approved the proposal last session, and he seemed optimistic about the chance of passage this time.

"If you ask most members of the last General Assembly whether they thought we should pass it, they would say yes, even those who would not vote for it because they just felt they could not do it politically," he said.

Lang said polls show most Illinoisans strongly support a medical marijuana law, so legislators really cannot blame their own opposition on the voters.

Lang said the Illinois proposal borrowed some ideas from other states' laws, including those of Arizona, Michigan and Colorado. But Lang said his proposal included "a lot of our own language," making it "the strongest, most highly regulated and controlled proposal for medical marijuana ever drafted in the United States."

The bill filed this week, titled the "Compassionate Use of Medical Cannabis Pilot Program Act," only contains a single paragraph, describing the measure as "an act concerning alternative treatment for serious diseases causing chronic pain and debilitating conditions."

The filed bill serves as a procedural placeholder.

Lang said he will set out the full language in an amendment by at least early February.

He said the proposal he will offer this session will be similar to last year's but will reflect some improvements to make the measure easier to pass.

Lang did not fully outline the new proposal but said one change "will make the flow of the product easier for the patient," he said. "My goal is to make a product available to very sick people at a price they can afford and a location they can get to."

The measure is House Bill 1. 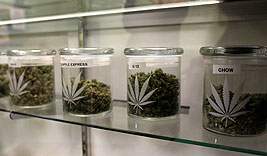