House member Lou Lang (D-Skokie) has been pushing two controversial bills over the last two decades: the expansion of Illinois gaming and the legalization of medical marijuana.

Whenever asked about the possibility of Illinois becoming the nineteenth state to legalize the green leafy substance, Lang is always optimistic. Two years ago, he told Patch that he only needed to secure "two or three" votes to pass the bill. Obviously, that never came to fruition.

However, other states have recently passed similar bills and Lang is hoping Illinois can become the next state to ride the green wave and help those who can seriously benefit from the drug. Recently, Massachusetts and Washington, D.C. lawmakers voted to allow the use of marijuana for medical purposes. Meanwhile, Colorado and Washington have taken it to another level, allowing citizens to smoke pot recreationally.

But for Lang the legalization of medical marijuana isn't about recreation use - it's about helping people who can benefit tremendously from the drug, he said.

"Nobody should fear the bill," Lang told Patch. "This is about quality of life for people."

Lang said he "strongly believes" that lawmakers will be voting on the bill this January, a month known by many as the "lame duck session," where elected officials can vote on a particular bill just before the end of his or her tenure.

"Illinois would be the nineteenth state to pass the bill," Lang said. "And of all of those, Illinois will be the most tightly regulated."

What are some of those regulations? According to the House Bill 0030:

In May 2011, Lang's medical marijuana bill received 53 of the 60 votes needed to pass. In November 2010, the bill once again fell short by seven votes and failed to pass to the Senate.

"How do you turn down the people who are sick? Who are in pain?" Lang said. "People who haven't been able to have a quality life. This is not a bill about drugs. This is a bill about health care." 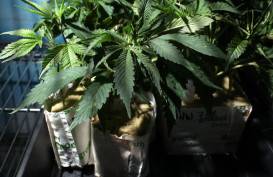 Pass it to the Right: Medical Marijuana Gaining Steam in Illinois