In Italy, The Army Provides Medical Marijuana. And That's A Problem

In Italy, as in most of western Europe, medical cannabis is legal. What sets the country apart is that cultivation of the plant is a de facto army monopoly.

The only place cannabis can be legally grown here is at a heavily guarded military facility in Florence where, this year, two greenhouses produced a yield of about 220 pounds.

"We do everything in-house," said the facility's director, Col. Antonio Medica. "We grow the plants, harvest them, dry and grind the leaves, sanitize the final product with gamma rays, then ship it to pharmacies and hospitals."

Now the army's involvement in the therapeutic marijuana business is set to expand. Under a new budget law moving through Parliament, the cannabis program at the Military Chemical Pharmaceutical Plant is to receive an additional $2 billion in public funding. If the bill is approved as anticipated, military officials say, they expect production to triple within a year.

The bill will also make medical cannabis free for all patients, with the cost covered by the government. Until now, local governments have covered the cost in just 11 of Italy's 21 provinces.

Not everyone is happy with the army's role, however. Some say they believe that even with the new funding, the quantity and the quality of Italian-grown cannabis will fall short.

To understand how the army ended up growing pot, one has to understand the country's health policy – and the way its implementation has, at times, been delegated to the military.

Italy legalized cannabis for medical use in 2007, with many caveats. To grow the plant legally requires special authorization from the Health Ministry's narcotics office, which means dealing with the country's infamous bureaucracy. As a result, no private entrepreneur managed to set up a business, and the drug had to be imported from abroad, making it prohibitively expensive.

Since access to medical care here is considered a constitutional right, in 2014 the government assigned the task of growing medical-grade cannabis to the military. The army was already responsible for the production of "orphan drugs," medications that cure rare diseases and are not produced in the market economy.

"Producing medicines is a standard part of what the Defense Industries Agency does, because health is a matter of national security," Medica said.

Problems with the decision soon became apparent, according to critics.

One difficulty is that the army makes only one strain of cannabis, called FM2, which is low in THC, one of marijuana's main active substances, when compared to imported strains.

Andrea Trisciuglio, a 39-year-old multiple sclerosis patient from Foggia in southern Italy, said he has been using medical marijuana for the past 10 years to mitigate his symptoms but has found the local supply ineffective.

"The FM2 just doesn't work for patients like me," he said. "I have to use Bedrocan" – a variety of cannabis with about 22 percent THC, compared to FM2's 8 percent. Trisciuglio said that his local hospital imports Bedrocan from the Netherlands but that he sometimes he has to wait as long as a month for it.

The trouble with importing cannabis from the Netherlands is that it "is expensive, which also makes it slow," said Carlo Valente, a lawyer in the southern city of Lecce who is representing Trisciuglio and other patients. Dutch medicines, he said, reach Italy through intermediary agencies, which raises their price.

"This is making doctors, who already struggle with the social taboo associated with cannabis, even more reluctant to prescribe it and hospital pharmacies less cooperative," he said.

According to an investigation by the magazine Internazionale, imported cannabis can cost up to $84 a gram. By contrast, the army-produced cannabis costs $7 a gram, Medica said. "We are a nonprofit."

But to critics of the system, affordability does not cancel out the homegrown product's other shortcomings. In addition to quality issues, they say, the army lacks the capability to produce all the therapeutic cannabis that Italy needs.

National consumption of the drug is between 880 and 1,000 pounds a year, according to military estimates. This means that even if the military succeeds in tripling its annual production to the anticipated 660 pounds, it will not meet the country's need, and imports from the Netherlands will still be necessary.

To Trisciuglio, the army monopoly is not in patients' best interest. "The army alone is just not enough," he said. "We need to make it easier for others to grow medical cannabis."

In 2012, Trisciuglio and other patients petitioned the local government for authorization to grow their own marijuana, under supervision, but never received a green light.

Medica, however, is confident that the army can meet – and keep up with – the demand, perhaps even to the point of sending its own cannabis abroad.

"We are working around the clock to increase the production and are experimenting with a new variant, for patients who are not satisfied with FM2," he said. "In the near future, we hope to export to San Marino and the Vatican." 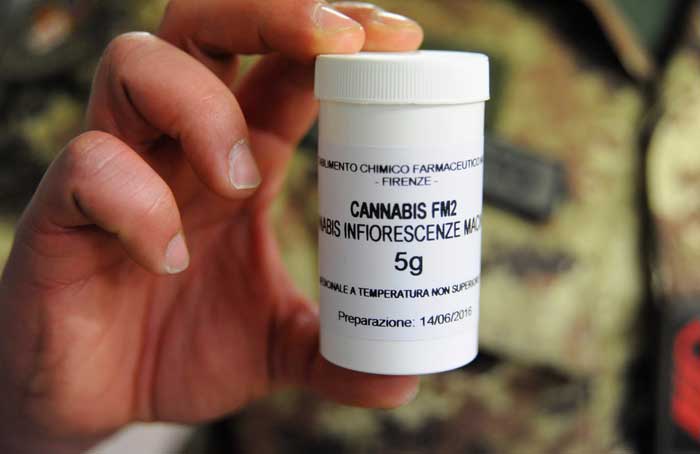 T
To Grow Cheap Marijuana, Italy Calls In The Army

Oct 13, 2014
The General
T
J
Italy's Army Bringing Down The Cost Of Getting Medical Marijuana