In Medical Marijuana States, Doctors Are Under Different Scrutiny

The green-typeface slogan "WE'ED like to be your doctor!" - unmistakably weed-friendly - has attracted hundreds of medical marijuana patients in less than a year to Dr. Bodo Schneider's clinics in southern Illinois and suburban Chicago.

In New Jersey, Dr. Anthony Anzalone has a similar following at his three clinics, marketed online with a marijuana leaf logo and a "DrMarijuanaNJ" web address.

The two marijuana-friendly doctors in states with similar laws face starkly different treatment by government regulators. When it comes to oversight of boundary-pushing doctors, enforcement practices vary in the 23 states allowing medical cannabis.

Illinois has taken a tough posture. Schneider, a former emergency room doctor, may get his license revoked in a medical board case getting underway Tuesday. Accused of charging patients for marijuana recommendations without a legitimate doctor-patient relationship, he's the third Illinois physician to face punishment related to medical marijuana in a state where legal sales only started this month.

"I understand why they don't want everybody and their uncle opening up a marijuana stand," said Schneider's attorney, Luke Baumstark. "But I think the regulators have gone after a very high percentage of the people who have tried to use this law at all. It's over-aggressive."

New Jersey has taken no disciplinary action against Anzalone, a gynecologist, or any other doctor related to medical marijuana since sales started three years ago, according to Jeff Lamm, spokesman for the state's Board of Medical Examiners.

"The state's been very good to me," Anzalone said in a phone interview. "We're complying with the law as best we can. ... All I'm doing is the job other doctors don't want to do."

Indeed, pot doctors fill a void left by physicians unfamiliar with marijuana's health benefits and fearful of endorsing what the federal government regards as a controlled substance, cannabis advocates say.

Schneider is a "godsend to patients" in southern Illinois, where two major health care organizations actively prevent their doctors from recommending marijuana, said Dan Linn of the Illinois chapter of the National Organization for the Reform of Marijuana Laws.

Writing a law to restrict how doctors recommend marijuana is tricky. Lawmakers in Illinois, New Jersey and other states have tried to avoid California's drop-in, instant exams by attempting to define in legislation a legitimate doctor-patient relationship. Laws commonly call for a "bona fide" relationship with a physical exam and review of medical records. New Jersey doctors must register in a publicly viewable database and take courses in addiction medicine and pain management.

Even in two more tolerant states – Colorado and California – how governments oversee pot doctors has become an issue.

In Colorado, where medical marijuana has been legal since 2000, more than 115,000 people hold medical recommendations because they're either too young to buy recreational pot or because they prefer a lower tax rate and higher possession limits. Colorado health authorities have grappled for years with ways to curb suspect pot recommendations.

Colorado physicians are barred from working out of dispensaries or having any financial stake in the marijuana business. As in other states, they're required to examine patients in person once a year.

The Colorado Medical Board says it has sanctioned at least six physicians since 2009 for violating pot regulations, though details of those cases aren't public. In 2013, one physician received three years' probation after being convicted of making an improper pot recommendation to an undercover police officer.

In notoriously permissive California, a "Get Baked Sale" of marijuana food products in June had doctors on hand to provide on-the-spot patient recommendations. The state, which was the first to legalize medical cannabis, has disciplined only eight doctors in 20 years for improper marijuana recommendations.

California's laid-back approach may change. The state recently enacted legislation to require the Medical Board to crack down on doctors who write recommendations without a proper patient exam or valid medical reason.

In Illinois, regulators alerted doctors soon after the medical marijuana law passed in 2013 that one doctor shouldn't set up shop to treat all the eligible medical conditions, which range from glaucoma to HIV and cancer.

"The Department will continue to closely scrutinize instances where a physician's practice exists solely to offer medical cannabis certifications," said Terry Horstman, spokesman for the Illinois Department of Financial and Professional Regulation.

Supporters fear that Illinois' harsh stance discourages mainstream doctors from participating and that this pushes patients into the arms of a few pot doctors who may be unmotivated to follow up on patients' overall health concerns.

Said Chris Lindsey of the Marijuana Policy Project, a national group that supports legally regulated marijuana: "Having a few well-known clinics in the state that clearly follow the rules can be a valuable resource, both to patients who otherwise have few options, and for doctors who would prefer to make a referral." 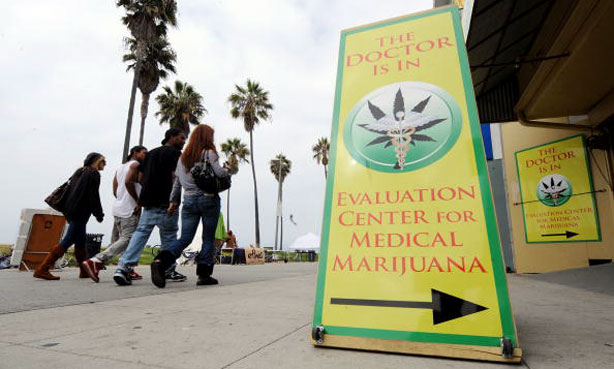 Strange how they are so quick to jump on the band wagon to nail these guys to the cross. It seems to be the way things are handled throughout the country. It is another case of the "just us" behavior of cliques of physicians! They are some sick puppies!

Funny how they can see patients for years without doing a complete history and physical, yet go after these guys for the same practice! If my mother had a physical, maybe she could have been better treated for the cancer that was ignored for a couple of years!

I have had a problem getting any response, so far, with a request to look into the case of euthanasia that some of their doctors practiced on my mother! They have a way of destroying the competition a lot faster than taking care of, questionably, felonious behavior!