Valparaiso - Beth Wilson paused Saturday during a marijuana legalization rally outside the Porter County Courthouse, suddenly able to feel the electric pulses generating from a pacemaker-like device beneath her skin.

"I hate this thing. They've got me on all kinds of medications," said Wilson, adding she also self-medicates with cannabis use.

Moments later, the pulses subsided and Wilson rejoined the nearly two dozen others yelling out "Legalize marijuana!" on the corner or Washington Street and Indiana Avenue in downtown Valparaiso.

As songs like Bob Marley's "One Love" played from the group's stereo speaker on the sidewalk, many cars honked. Others gave thumbs up in support. At one point, an officer in a police cruiser even threw the crowd a peace sign.

Saturday's rally was hosted by The Higher Fellowship, a Beech Grove-based civic organization that advocates for marijuana legalization for medical, industrial and agricultural uses.

Group co-founders David Phipps and Bobbie Young said the organization is in the midst of a 92-county, statewide tour in light of recent litigation that's garnering attention.

The Indiana chapter of the American Civil Liberties Union filed a lawsuit earlier this month against Tippecanoe County on behalf of The Higher Fellowship after county officials denied the group's request to host a rally on courthouse grounds.

The lawsuit challenges the county's closed forum rule that allows officials to "pick and choose" who gets to hold public forums, rallies or events on courthouse grounds, Phipps said.

"If they let one in, they have to let in others," Phipps said.

Phipps said he is amazed how quickly the group has grown since officially incorporating in May. The group's Facebook page has just over 1,400 likes.

The ACLU lawsuit has certainly raised the organization's profile, he said, but it's going to take Hoosiers from all across the state to rally and lobby the Indiana Legislature.

Indiana Sen. Karen Tallian, D-Portage, has largely led past efforts to pass medical marijuana legislation, but those efforts have failed to persuade a Republican-controlled Senate.

"Right now, we're pushing for medical cannabis use," Young said. "We obviously want them to legalize it for recreational use, too, but first we need to give veterans, cancer patients and people who suffer from epileptic seizures the freedom to choose."

Members of The Higher Fellowship were joined Saturday by the Northwest Indiana chapter of National Organization for the Reform of Marijuana Laws (NORML), a group with a similar mission of promoting legalization.

Nick Dovellos, 27, of Valparaiso, is a member of NORML. He said lawmakers should consider the added tax revenue that comes along with legalization.

The group marched with signs and a loudspeaker through the streets of downtown Valparaiso, handing out business cards to curious passers-by.

"We're out here today encouraging Hoosiers to get involved," Phipps said. "It's going to take the community. People need to write and call their legislators." 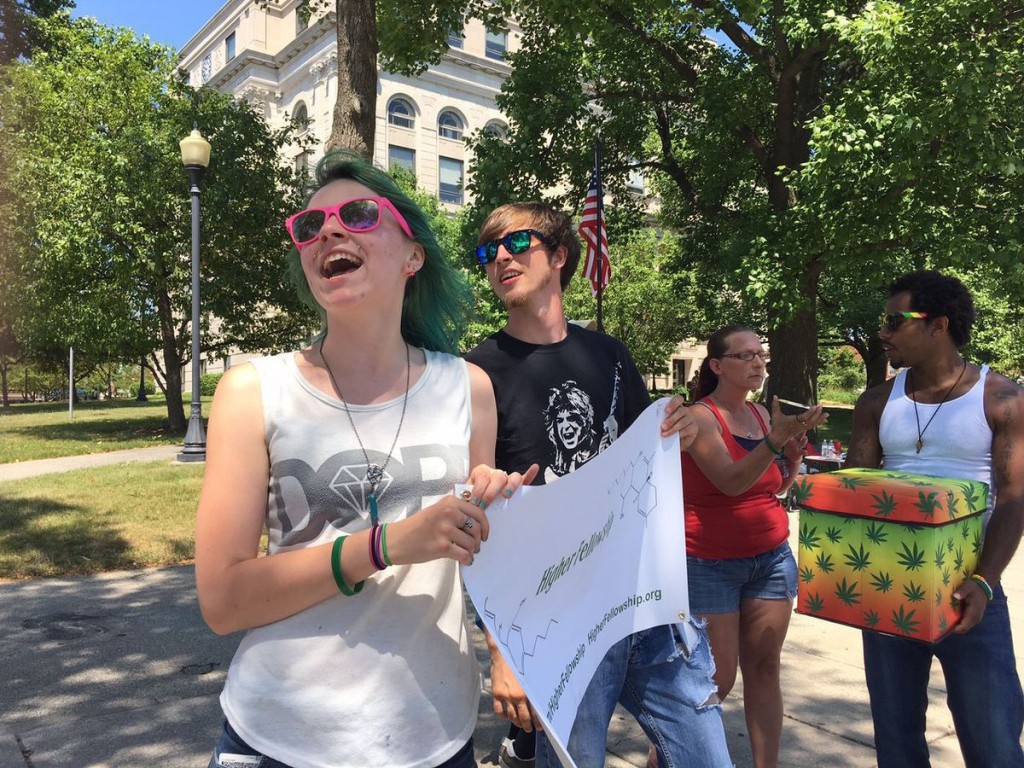 Glad to see people getting active, that is the only way there will ever be change!