Congressman Thomas Massie (R-KY) and 28 co-sponsors, including House Agriculture Committee ranking member Collin Peterson (D-MN), have reintroduced legislation in Congress that requires the federal government to respect state laws allowing the cultivation of industrial hemp. Hemp is a distinct variety of the plant species cannabis sativa that contains only trace (less than one percent) amounts of tetrahydrocannabinol (THC), the primary psychoactive compound in cannabis.

House Bill 525, the Industrial Hemp Farming Act of 2013, amends the Controlled Substances Act to exclude industrial hemp from the definition of marijuana. The measure grants state legislatures the authority to license and regulate the commercial production of hemp as an industrial and agricultural commodity.

Eight states — Colorado, Maine, Montana, North Dakota, Oregon, Vermont, Washington and West Virginia — have enacted statutory changes defining industrial hemp as distinct agricultural product and allowing for its regulated commercial production. Passage of HR 525 would remove existing federal barriers and allow these states and others the authority to do so without running afoul of federal anti-drug laws.

Senator Rand Paul (R-KY) and Republican Leader Mitch McConnell (KY) are supporting the introduction of a companion bill in the US Senate.

According to a Congressional Research Service report, "The United States is the only developed nation in which industrial hemp is not an established crop."

Previous versions of the Industrial Hemp Farming Act have stalled in Congress. The issue has never before been debated in the Senate. 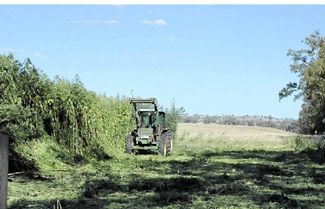