Cowboy hats and flasks adorned with imitation jaguar and snakeskin prints dot the market of the Paraguayan border town of Pedro Juan Caballero.

Cross the two-lane avenue outside and one will have entered Brazil.

Not far away, one will find casinos, motels and brothels typical of a crime-ridden frontier.

The town is on a key trafficking route into Brazil, with two major gangs – the First Capital Command (Primeiro Comando da Capital — PCC) from SÃ£o Paulo and the Red Command (Comando Vermelho) from Rio de Janeiro – competing to import Bolivian cocaine, firearms and other contraband.

In June 2016, a ceasefire between the factions came to an end when lead gangster Jorge Rafaat, allied with the Red Command and known as the "king of the frontier," was executed in his armored Hummer. His death has been attributed to the PCC.

Pedro Juan Caballero is just the start of a journey into a more tranquil, hidden – but no less illegal – world just a few kilometers from the border with Brazil.

It is here – for the most part, untroubled by police or other authorities – that gigantic plantations exist to grow the vast majority of the cannabis smoked by millions of Brazilians.

Eighty percent of cannabis produced in Paraguay is smuggled to Brazil, according to data from Paraguay's National Anti-Drug Secretariat (SecretarÃ­a Nacional Antidrogas — SENAD).

Three million Brazilians regularly use the drug, according to the Second National Survey on Alcohol and Drugs at the Federal University of SÃ£o Paulo, and in the first six months of 2017, Brazil's Federal Police seized 126 metric tons of the drug, most of it originating from Paraguay.

Unlike Colombia and Uruguay, planting cannabis is illegal in both Brazil and Paraguay.

The Paraguayan plantations are believed to cover 7,000 hectares. Those working on land reveal a widespread system of impunity, guaranteed by a network of corrupt police officers and other officials.

Among these plantation workers is Adriano" , a 25-year-old Brazilian who manages a plantation for its "owner." Adriano spends most of the year in the fields with the workers who plant and pick cannabis, mediating any problems between them and the field boss.

Adriano's boss, Gerson, is a 50-year-old Brazilian who was born into a family that has always exploited cannabis.

While he is the "owner" of two plantations, he is not the legitimate owner of the farms, which are usually appropriated public land, including forests and protected national parks, or they are rented from the owner of a much larger estate.

In a Toyota pickup truck, loaded with food and cleaning products, Gerson drove to his plantation, talking to Adriano about the threats they face from police units.

The Paraguayan police do not cause many problems, Gerson said.

When stopped, the pair paid a bribe of about $70 and were allowed to continue.

The Brazilian police are similar, Gerson added, except one feared military police unit.

"They do not mess around," he said. "With them, it is either jail or a coffin."

Along the way, the pickup changed side, and country, several times, in an effort to avoid police stations.

While passing through the nearest town to the plantation, which has less than 1,000 inhabitants, Gerson rolled up the tinted windows to avoid being seen.

The headquarters on the farm is a simple house with a bedroom full of bunk beds, a bathroom with hot water and a television and satellite dish.

Adriano explains that in his five years at various plantations in the region, it is the first time that he has such comfort; usually, he would spend months camped out on the plantations.

Adriano and Gerson are armed with pistols.

But unlike the frontier, in the countryside disputes between groups are almost unheard of and police operations are usually announced beforehand and the outcome negotiated.

No one wants to draw too much attention to what is going on.

According to Gerson, politicians are bribed to delay the pavement of roads that would improve access to the region, helping to complicate any police operation.

On one occasion, Gerson's informants called to tell him that SENAD was planning to carry out an operation in an area that included a plantation of his and four others.

Immediately, Gerson's team went to the farm and hid tons of dried cannabis.

A day later, Gerson received a visit from Cabanas" , a Paraguayan man in his seventies, with a cowboy hat and a pistol in his holster.

He is the "boss" of the region and acts as an intermediary between the landowners and the Paraguayan government.

Cabanas said that police were proposing cancelling the operation if each plantation boss paid 10 million guarani ($1,800). It was unclear how many bosses there were, but Gerson said there are hundreds of plantations in the region.

He explained that it is always the same at harvest time: the police threaten to invade the farms as a means of upping their bribes.

Last year, Brazilian Justice Minister Alexandre de Moraes arrived in the region with SENAD officials, local media reported at the time. He used a machete to cut down cannabis plants, sending a signal to traffickers that illegal plantations would not be tolerated.

"It's all negotiated," Gerson said when asked about the operation.

"We deliver a little crop for them, take everything that's worth something out of there and leave the plants alone," he said.

'No One Is Ever Arrested'

When asked about these claims, Francisco Ayala, the SENAD communication director, said that it "must be assumed that there is no institution that is 100 percent transparent or 100 percent incorruptible, especially when it comes to drug trafficking, a business that moves many millions, which often makes it possible to buy what you wish, or the temptation to fall in the drug trafficking network".

Ayala told AgÃªncia PÃºblica that "any security force is in constant danger of its members falling into corruption," but that SENAD has implemented policies to try to prevent this.

"We believe that this historic level of seizures that has taken place in the last three years, we have never before seen these levels of destruction of marijuana crops or seizures of cocaine, is precisely the result of this policy of purification and internal transparency," Ayala said.

"We are not infallible, there might always be corruption, but this policy is getting results and as the drug trade has been damaged in recent years in various regions of the country."

During the four months the cannabis grows, a field is taken care of by two or three workers. At harvest time, another 10 are recruited to pick, dry, sack, shred and press the flowers.

The rates, as well as the price of the cannabis, are decided by the farm owners to avoid competition.

The camps where the peasants sleep are made of logs, canvas, string and wire.

The water comes from wells or streams and is often hot and brown.

The camp is very dirty and is scattered with cheap bottles of wine and Fortin, a local cachaca spirit.

The men work from sunrise to sunset, except for the cannabis press, which runs non-stop with lighting from a generator.

There are also some fields that operate 24 hours a day during the harvest, with reflectors illuminating them.

Few have ever worked in any other type of agriculture. Most of the workers are young, around 20, silent and suspicious.

Their ambition is only evident in the looks in their eyes.

Roque is responsible for a field, from sowing to harvesting. He chooses the seeds, fertilizers and techniques that will be used to grow the crops.

The now-25-year-old started planting cannabis at the age 17 after finishing high school and not being able to find a job. After four years harvesting crops for others, he now coordinates his own field, financed by Gerson.

Roque, who now takes half the profit from selling the cannabis, wants to get out of the plantation life and start an agricultural supply shop.

He cares for his plants with affection and gives the patches nicknames.

He spends any profit he makes on girlfriends and prostitutes.

There are practically no women on the plantations, but workers communicate with girlfriends via WhatsApp.

There are still a few family farms, but these days, they are rare.

"It's getting harder and harder to work without a boss," Roque explained. "Because the police are asking for more and more money."

Cannabis money feeds families and keeps communities functioning in this corner of Paraguay, but does not provide enough to get these people out of their misery.

Even the managers live a paranoid existence with very few possessions; a motorcycle and some brand-name clothing, perhaps. And they know they are easily replaceable.

If the money made from trafficking cannabis offsets the risk for anyone involved, it is not for these workers at the sharp end of the deal. 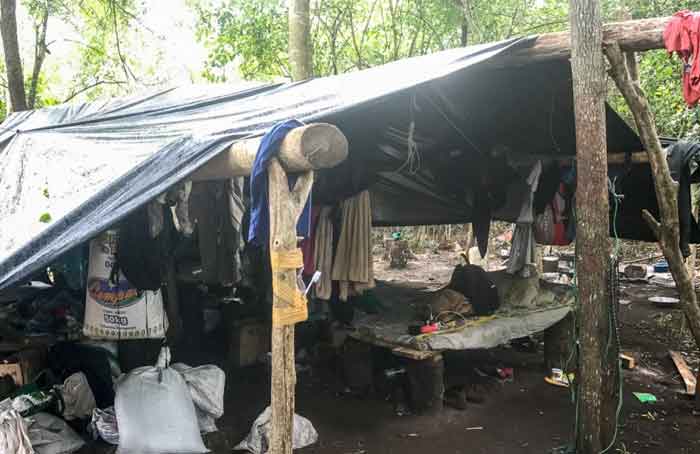 Drug Production Is Booming In Paraguay, And So Is Drug Violence