(Notice that this "experiment" is not very scientific since I used different strains and also planted two of the seeds two days later than the two others). But it is "interesting" nevertheless.

So I was deciding to grow some more Autos just for fun, they were AK47, Critical, Bullet Magnum and White Widow.

We had (the old) discussion about "Autos Uppotting or not?" but in this case I decided I wanted to grow them in their final pots.

So I came up with the idea to make my own "light" potting mix from my existing commercial potting mix.

I dumped a bunch of my mix into a wire mesh waste basket and then washed it and flooded it with lots of water. The idea here was to flush out all nutrients from the soil.

The flooding washed out all the finer particles of the soil too.

At the end I had a real "weird", rough looking potting mix. I wanted to try this mix to for my seedlings since I never tried to grow with a "light" potting mix before.

A person here on the forum gave me a genius tip:
I CAN put my seedlings in the final pots with the pre-fert soil, but I can make a small mold in the middle of the pot the size of a small seedling pot.

So for two of my pots, I made this mold and filled in my "crappy" soil, the mix I washed and flooded with water.

I then planted four Autos.

Two of them, those with the "crappy soil" mold in the middle I planted TWO DAYS LATER.

(The idea with the mold is not having to re-pot, but still getting the advantage of starting the seedlings with poor soil)

In the very first days, the ones which I planted like normal into the pre-fert mix had been BIGGER than the ones I planted with the mold. This was logical to me since they had a two days head start.

Now I am checking my four pots, and the two which I planted in the pots with the crappy soil mold (which are still two days younger) are noticeable bigger! 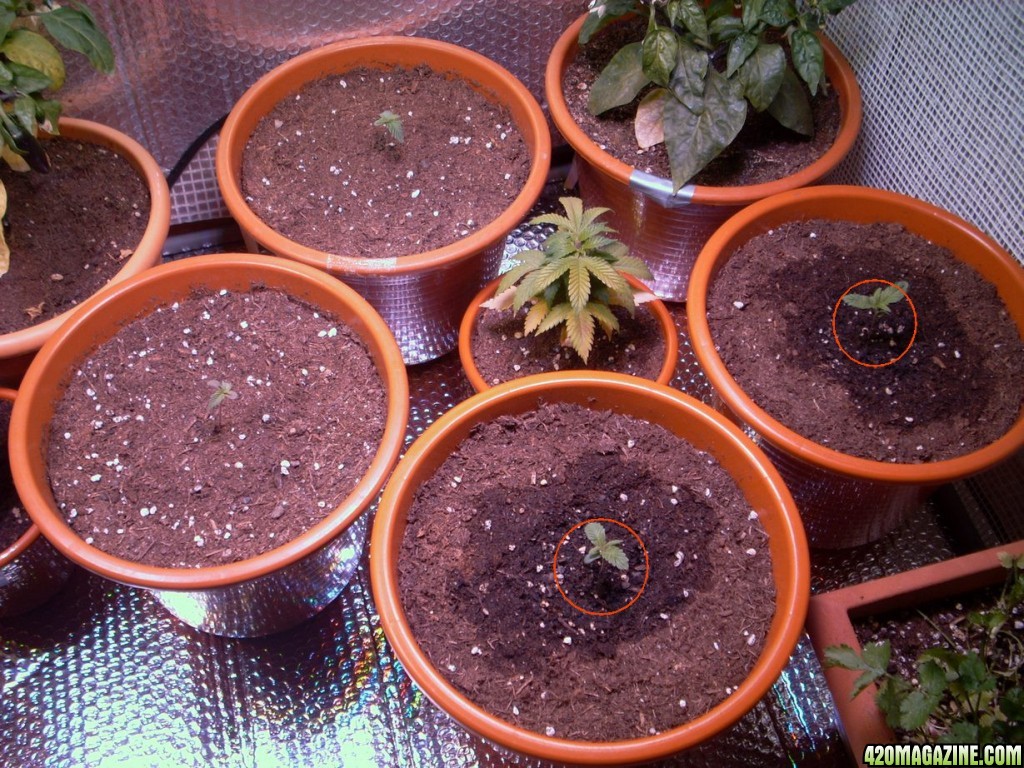 Notice that I water the four pots the same amount of water. The section where the "crappy" soil is marked in red . The section with the poor soil is about the size of the red circle. (The crappy soil sucks up and holds water differently than the potting mix, this is why it looks like the two pots with the mold are wet and the others are dry. But all the four pots got the same amount of water).

I think it's remarkable that the two which I started in the mold with flushed soil are now LARGER since they started smaller.

I will watch this and see how they will grow.

Too bad the test is not 100% accurate since I used different strains. 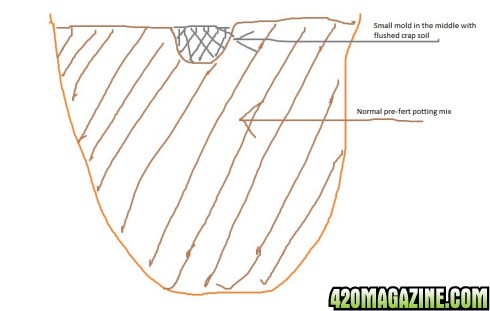 My Journal: "A Challenging Grow": Newbie Grows In Brutal Heat in a Greenhouse in Spain

A person here on the forum gave me a genius tip:
I CAN put my seedlings in the final pots with the pre-fert soil, but I can make a small mold in the middle of the pot the size of a small seedling pot.

Wow..what a foolish post I did there not too long ago. Because it's so obvious.

The best might be to use like 5x5cm rockwool cubes, even easier. (Or even fill a hole with perlite/vermiculite, whatever holds water and doesn't have nutes).
My Journal: "A Challenging Grow": Newbie Grows In Brutal Heat in a Greenhouse in Spain