What interpol says for 2008

Products from the plant Cannabis sativa, or marijuana, are the most commonly abused and widely trafficked illicit drugs in the world. The most normally encountered form of cannabis is the dried leaves and flowers of the plant, which have a tobacco-like appearance and are either rolled into cigarettes (joints) or packed into cigars (blunts). Sinsemilla is the same form of the drug prepared from the unpollinated (seedless) female plant and has a higher level of the psychoactive chemical Delta-9-tetrahydrocannabinol (THC). Cannabis resin is the term applied to the dried secretion of the flowering top of the cannabis plant. Also called hashish, the drug can be in the form of a fine powder or compressed into slabs, and is either mixed with tobacco or orally ingested. Cannabis oil, while not as common as the other two forms, is made by extracting the cannabis resin in a manner similar to percolating coffee.

Legal statutes describe cannabis as a depressant with mild hallucinogenic properties, although it is also described as a stimulant and intoxicant. The effects of cannabis are a sense of euphoria, state of relaxation and enhancement of sensory experiences. The short-term effects of cannabis include an increase in appetite, faster pulse rate and impairment of both physical and intellectual performance. In large doses cannabis can cause effects similar to hallucinogens including confusion, restlessness, excitement and hallucinations. The long-term effects of cannabis may include the development of a tolerance for the drug and psychological dependence. According to research by Harvard University in the United States, the risk of a heart attack is five times higher than normal in the hour after smoking marijuana. Smoking marijuana also weakens the immune system and increases the risk of lung infections. Cannabis smoke has 50% more tar than smoke from regular cigarettes and contains more than 400 chemical compounds, several of which have been identified as carcinogens. 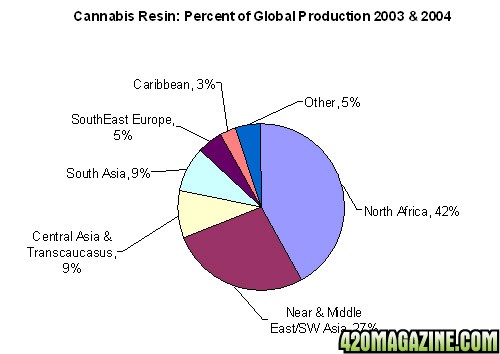 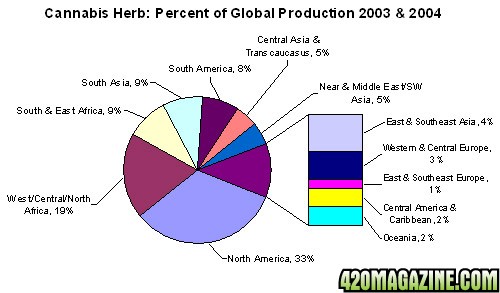 Cannabis grows well in nearly every part of the world and can be cultivated in large fields or in small indoor operations. Compared to other crop-based drugs such as cocaine and heroin, cannabis is easily cultivated and requires very little preparation after harvesting, which results in a highly decentralised criminal activity. The scope of global production precludes any type of effective imagery-based crop survey like the one used to estimate cocaine and heroin production. Also, the presence of large-scale indoor production facilities further reduces the validity of crop estimates. Working within the confines of these limitations and survey data supplied by 197 countries, the United Nations Office on Drugs and Crime (UNODC) listed in its World Drug Report 2005 163 countries and territories where cannabis is produced. The UNODC further estimates total global production of the cannabis herb may be 42,000 metric tons.

A disturbing trend over the past several years has been an increase in the potency of marijuana. The demand for high-potency Sinsemilla, generally grown indoors, has created a niche market and has forged alliances between disparate criminal groups. This is particularly evident in North America, where demand for 'hydro' or 'B.C. bud' has resulted in a confederation of Vietnamese marijuana growers and Indo-Canadian transportation specialists, with members of the Hells Angels motorcycle gang supervising and co-ordinating operations. 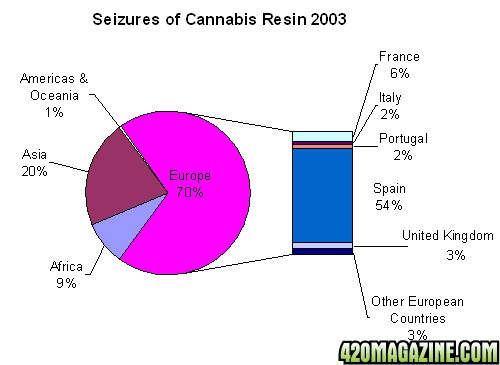 Since cannabis products are easily produced in nearly every region of the world, trafficking patterns are more regionalised than they are for other crop-based drugs (most notably, cocaine and heroin). This should not, however, minimise the importance of understanding the dynamics of the trade. The trafficking of marijuana is a multi-billion-dollar professional enterprise, as evidenced by the discovery in July 2005 of a sophisticated tunnel running between British Columbia, Canada, and the United States which was used to smuggle marijuana and MDMA. Two similar seizures in Bridgetown, Barbados, in 2005 further demonstrate the sophisticated methods which are used to move cannabis. Authorities have also discovered compressed marijuana inside containers attached to the bottoms of commercial cargo vessels. The first seizure of 215 kg was discovered on 13 June, and the second seizure of 77 kg occurred on 17 June. Each vessel had two square metal containers attached to the bottom of the hull.

The revenue generated by cannabis trafficking is often connected to other crimes and illicit drugs. According to a recent report issued the Royal Canadian Mounted Police (RCMP), the marijuana industry in British Columbia is connected to weapons and explosives trafficking, cocaine smuggling and stock market fraud. The RCMP estimates the marijuana trade generates $7.5 billion (Canadian) annually and contributes to an increase in violence associated with the trade. Criminal organizations in Mexico are involved in the movement of multiple drugs, including marijuana, cocaine, heroin and methamphetamine. Information from multiple law enforcement sources indicates Mexican criminal organizations use the revenue from marijuana trafficking to fund other drug-smuggling ventures.

The trafficking patterns for cannabis are based on two distinctly different drug markets. 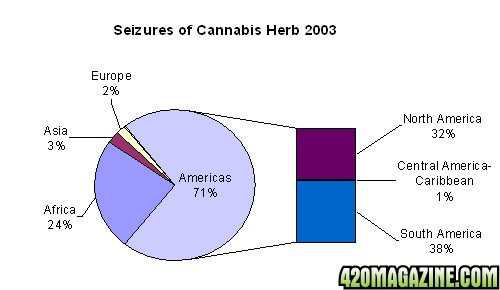 Herbal cannabis is the most widely trafficked drug and the most commonly encountered form of the drug. North America is the largest source of cannabis herb production, although the market is largely self contained. Possibly two-thirds of the cannabis products consumed in the United States are grown domestically, with the rest of the demand being supplied by Mexico and, to a lesser extent, Canada. Based on UNODC estimates, North America accounts for 33% of the global production of cannabis, followed by Africa, South Asia and South America. Significant exporters of cannabis herb include Lesotho, Malawi, Nigeria, South Africa and Sw aziland in Africa; Canada, Colombia, Jamaica and Mexico in the Americas; Central Asian states of K azakhstan and Kyrgyzstan; Egypt and Lebanon in the Middle East; and Cambodia, India, the Philippines and Thailand in Asia. Seizure data for cannabis herb further reflect the regional nature of the trade.


Despite claims of medicinal value and legalisation arguments, cannabis products remain illegal under the legal standards of the 1961 Single Convention on Narcotic Drugs, and revenues from the sale of illicit cannabis products are used for other criminal ventures. INTERPOL member countries remain firmly committed to their enforcement efforts against the cultivation and trafficking of cannabis products.
Mark Heinrich aka Smoking Moose Fallen 420 Warrior: Rest In Peace 1955 - 2017