State rules to take effect Jan. 30 were cleared Tuesday by a state legislative panel to govern registration cards that will provide legal protection for Iowans authorized to possess marijuana-derived cannabis oil for medical treatment of intractable epilepsy. However, Deborah Thompson, a policy adviser for the Iowa Department of Public Health, said her agency and the state Department of Transportation, or DOT, may not be in a position to actually issue the photo ID registration cards until a later "launch" date after the rules have taken effect.

DOT officials have been working with a vendor to produce the cards that are part of a new state law that allows very limited access to medical cannabidiol, she said. State officials are treating the cards as a "priority project" as they push for a launch date to physically issue the cards. "We just want to make sure that all of the pieces are there," Thompson said. "I would like to think we'll know closer to the date what everything looks like."

It is likely that the health agency will post an application form online in advance of the card issuance so patients and parents of minor patients can submit the pertinent information needed from a licensed neurologist to qualify. The state-issued registration card would provide an affirmative defense against prosecution to Iowans possessing no more than 32 ounces of the cannabidiol. "It's been a collaborative effort based on wanting to do right by these families," Thompson said of a process that is new to many states that are adopting medical marijuana laws. "All of the states are learning together. We all have different laws, even if we have the same goal."

However, the bigger issue facing families of epileptic patients in Iowa is getting access to a product that is expensive and only available in a limited number of places outside Iowa due to a host of legal hurdles. In May, the split-control Legislature passed and Gov. Terry Branstad signed into law Senate File 236, which granted special provisions for permanent Iowa residents at least 18 years of age with a written recommendation from a neurologist to possess and/or use cannabidiol as a medical treatment to alleviate symptoms of intractable epilepsy if there are no other satisfactory treatment options.

Intractable epilepsy is an epileptic seizure disorder that standard medical treatment does not prevent or significantly ameliorate the recurrence of uncontrolled seizures or for which standard medical treatment results in harmful side effects. The new Iowa law, which took effect July 1, gives prosecutorial immunity to people who have obtained the registration card to possess cannabidiol, a non-smokable oil extract of marijuana with a low tetrahydrocannabinol, or THC, level to treat the seizures.

Last month, members of a legislative study panel recommended Iowa lawmakers develop during the upcoming session a program to produce, process and dispense medical marijuana to address shortcomings in a new state law regarding access and standards to cannabis oil. House and Senate committee members also called for the federal government and Iowa's Board of Pharmacy to consider reclassifying marijuana as a schedule II controlled substance that would lessen criminal penalties and allow doctors to prescribe marijuana-derived medications. 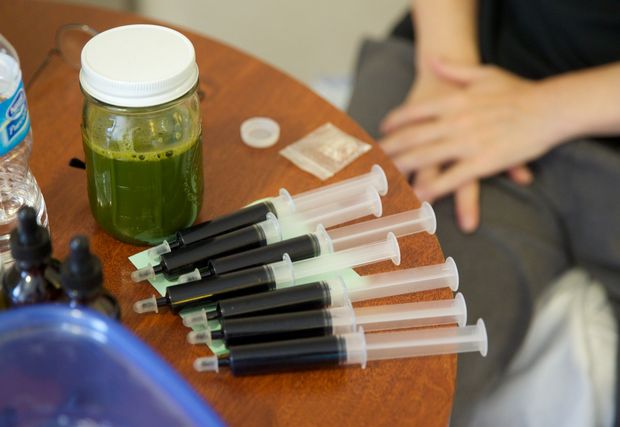