A rally in central Dublin is being held in support of seizure-sufferer Ava Barry (7) on Saturday afternoon calling on the Government to allow her access to cannabis treatment at home.

Ava, who has a rare and catastrophic form of epilepsy known as Dravet syndrome, has been receiving treatment in the Netherlands, where she has access to medicinal cannabis which keeps her previously-constant seizures at bay.

The rally, backed by People Before Profit TD Gino Kenny, saw a gathering of 120 people at the Garden of Remembrance ahead of proceeding into the city at 2pm.

Ava is the daughter of medicinal cannabis campaigner Vera Twomey, who has posted on Facebook on how the family are having to split their time between their Cork home and the Netherlands, as their other children are attending school. She says her daughter is remaining "seizure-free on medical CBD [cannabidiol] and THC [tetrahydocannabinol] in Holland".

Ms Twomey has said: "We have tried all sorts of therapies — cranial sacral therapy, massage therapy, equine therapy, occupational therapy, you name it. Cannabis oil is all we have left but nobody will prescribe it."

Dravet syndrome, also known as severe myoclonic epilepsy of infancy (SMEI), appears in infancy with frequent febrile seizures or fever-related seizures, according to Epilepsy Ireland. "Patients with Dravet syndrome can have febrile and other seizures severe enough to stunt mental and social development," the association website says. 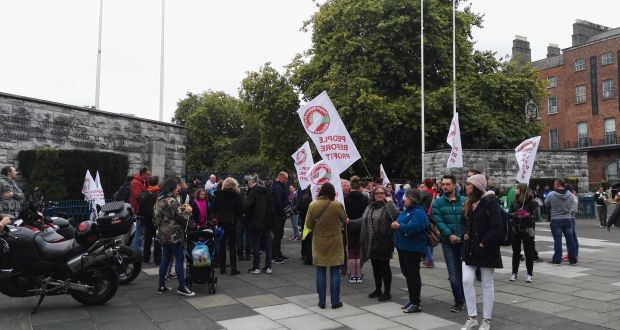 Ireland: Mother Of Child With Epilepsy Delighted Over Cannabis Recommendation