It's All About The Safety Of Medical Marijuana For Shimadzu

While most people associate marijuana with smoking for recreational use, with increasing numbers of states that have legalized it for medicinal use, the buzz word is safety for laboratory instrumentation companies.

One such company, among the vast array of exhibitors gathered at the 4th annual Cannabis World Congress and Business Exposition, held June 14 to 16, at the Javits Center in New York, stood Shimadzu Scientific Instruments (SSI), representing its Somerset branch.

Exhibitors at the show were dressed in marijuana-patterned suits. One vendor featured dogs wearing sun glasses to bring attention to the hemp, hand-sanitizing product it sported in its booth. Promoting sophisticated analytical instrumentation for medical marijuana testing, says Thomas Moran, Shimadzu's New Jersey Regional Sales Manager, "Shimadzu offers the broadest range of instruments for testing agricultural products, many more than our competitors. This means a lot of instruments since cannabis is a complex plant."

"We sell the same instruments to food and pharma companies," he adds. "Because of this, Cannabis was an obvious market for us. For example, if I'm going to be testing for pesticides, which is a big conversation in cannabis, it's just as big of a concern for tomatoes or other common vegetables. And just as there is an increase of generic pharma testing in New Jersey that increases the market for these same instruments, so is there in cannabis analysis in other states."

According to Thom, cannabis has been documented as an herbal remedy since ancient times. However, since the mid-20th century, federal regulations that were enacted, which prohibited its use due to its psychoactive properties, patients with cancer or severe pain, for example, had been blocked from these benefits. But now, with mainstream acceptance of cannabis increasing steadily over the past decade in the United States, the need for quality control testing is also increasing.

Thom notes, "Cannabis plants contain over 500 compounds that have been identified to be unique to cannabis. While tetrahydrocannabinol (THC), which is the psychoactive component in cannabis and the most abundant active component, cannabidiol (CBD), and cannabinol (CBN),are non-psychoactive forms commonly measured in cannabis samples. CBD has been shown to reduce convulsions, inflammation, nausea and anxiety, and has even eradicated tumors in some patients, by recent medical marijuana research."

Due to the increase in marijuana for medical use, Thom emphasized the need for companies to ensure their product is safe for patients, especially for patients who have compromised immune systems, and Shimadzu has the tools to help those companies and state regulatory agencies determine their products' safety.

Schimadzu Scientific Instruments (SSI) is the American subsidiary of Shimadzu Corporation, headquartered in Kyoto, Japan. Founded by Genzo Shimadzu in 1875, it is a $3 billion dollar multinational corporation.

Although Shimadzu is now a publicly traded company in Japan, there are still descendants of the founder who work for the company, according to Thom. One such person is Kozo Shimadzu. He is the general manager for one of the company's divisions in the United Kingdom.

Of further interest, Thom explains, Shimadzu's current size "resulted from organic growth. It didn't follow the typical model of acquiring other companies to grow. This," says Thom, who is an analytical chemist by training, "is something to be proud about."

The company's Somerset branch, which is New Jersey's regional office, serves three states: New Jersey, New York and Pennsylvania. Originally located in Princeton, Shimadzu moved to Piscataway since geographically this was more of a convenient location in terms of its New Jersey and New York City customers. Shimadzu then relocated to Somerset "just across the river," says Thom, "mostly because Somerset represents the company well with the area's professional and upscale traits."

According to a recent report by Arcview Market Research, North American marijuana sales grew by an unprecedented 30% in 2016 to $6.7 billion as the legal market expands in the U.S. and Canada. In the same report, North American sales are projected to top $20.2 billion by 2021.

However, according to Karen Paull, a sponsor at the show, who is the Creator and Producer of the new reality series, "The Marijuana Show," if Attorney General, Jeff Sessions , who has been in opposition to relaxing marijuana restrictions, gets his way, she believes the market will be greatly reduced.

Partner, Dan Humiston of Leading Edge Expositions, which is the company that put on the show, talked amusingly of the struggles he faced when he did his first cannabis show several years ago.

were a rag tag group. I even brought my kids to the first convention that we did. People were scared just talking about marijuana. They were scared of ending up in jail. But now," he adds, "the market is on a trajectory in which it is going straight up."

New Jersey was the fourteenth state to legalize marijuana for medicinal use. "Under the current political environment in New Jersey," notes Thom, "I don't see the marijuana laws changing in terms of legalizing marijuana for recreational use. No matter where your opinion falls on the usefulness of medical or recreational marijuana, from an analytical chemistry standpoint if any state is going to allow its use, it will need to regulate the safety of the product by testing. At Shimadzu we're all about the safety of the product for the consumer." 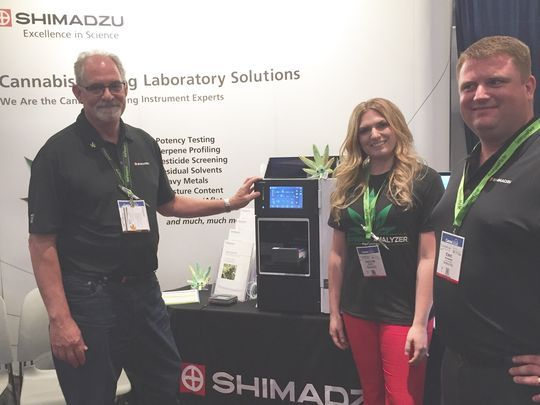