Jack Herer Dies At 70 - Author And Advocate For Marijuana Legalization

Jack Herer, an energetic advocate for marijuana legalization who was a mesmerizing presence on the Venice Boardwalk and achieved worldwide renown after he wrote a treatise extolling the virtues of hemp, died April 15. He was 70.

Herer suffered a debilitating heart attack in September, minutes after he delivered a typically pugnacious pro-pot speech at the Hempstalk festival in Portland, Ore., insisting that marijuana ought to be smoked morning, noon and night. "You've got to be out of your mind not to smoke dope," shouted Herer, dressed in a green short-sleeved shirt and shorts made from hemp. "It is the best thing the world has ever had."

He never recovered and died at home in Eugene on tax day. "Dad has not filed taxes in over 30 years, so it was wonderful he died on tax day, it really was," said his son Mark Herer, who is the president of The Third Eye, the family's smoke shop and hippie wares store in Portland.

Herer researched and wrote an exuberant book that became the bible of the movement to legalize hemp, a non-psychoactive strain of marijuana. "The Emperor Wears No Clothes," which was first published in 1985, has sold more than 700,000 copies. In it, Herer wields extensive documentation to ridicule the government's ban on hemp cultivation and to highlight the plant's versatility as paper, fiber, fuel, food and medicine.

The book made Herer into one of the most recognizable figures in the marijuana movement and converted him into a pop icon memorialized by a strain of cannabis. For decades, Herer, known as the Emperor of Hemp or the Hemperor, crisscrossed the country, rhapsodizing about the wonders of weed.

Bruce Margolin, one of L.A.'s best-known marijuana defense lawyers, recalls that Herer was always trying to teach people about hemp. "At that time I was ignorant of it like everyone else," he said. "He educated me and many, many other people through his book and his lectures."

Herer was born June 18, 1939, in New York City, the youngest of three children, and served in Korea as an Army military police officer. He discovered his mission in Los Angeles after he moved to the city in 1967 with his wife and three sons to work at a neon sign company. He tried marijuana two years later and quickly became engrossed in learning about it. "He was always a very curious person about everything. He read everything he got his hands on," said Vera Donato, who was married to Herer from 1960 to 1969.

In the early 1970s, he wrote "G.R.A.S.S.," which stood for "Great Revolutionary American Standard System." It promoted a 1-to-10 scale for grading marijuana. He also began to invent drug paraphernalia.

In 1973, he launched a relentless effort to legalize marijuana in California, working year after year on initiatives that failed, often in league with Ed Adair, a head shop owner who died two decades ago. In 1980, the two became co-commanders of Reefer Raiders and set up camp on the lawn of the federal building in Westwood, openly smoking joints for the media. A year later, they pushed their own measure.

Herer opened a head shop in Van Nuys called High Country and recruited other owners to help fund his initiatives. In 1983, he ran afoul of a new state law that made it a misdemeanor to sell devices to use with illegal drugs. Police confiscated more than 6,000 items in two raids. Three years later, Herer was convicted and ordered to pay a $1,500 fine and serve two years' probation.

In the 1980s, he could frequently be found at an information booth on the Venice Boardwalk, a gregarious man who showed obvious pleasure in trying to persuade skeptics. "I think the thing that motivated him the most was his love and respect for planet Earth and that he was a kind and good-hearted person just naturally," said Jerry Rubin, a fellow activist who was often stationed nearby. "He was doing a consciousness-raising lifetime exercise."

Herer researched "The Emperor Wears No Clothes" for years, scouring the archives of the Library of Congress for evidence that he believed the government suppressed when marijuana was outlawed in 1937.

The book, updated many times, sparked a hemp resurgence, and he became a circuit-riding preacher. In 1990, Herer addressed 60 rallies in 48 places in one six-week stint.

At 6 feet and 230 pounds, with unkempt hair and a bushy beard, Herer was an imposing, but not intimidating figure, a bearish counterculture holdout who was often found in tie-dyed shorts and a T-shirt with a pot leaf overlaid on an American flag on the front and a history of hemp on the back.

Herer had a heart attack and stroke at a hemp festival in 2000. He boasted that his rehabilitation was aided by cannabis oil. When he concluded his last speech, he said, "Come over to my booth, over there, and I will see you next time."

"He didn't write the script, but you couldn't write it better," Mark Herer said. "Dad has a speech, the crowd cheers and he walks off into the sunset."

Herer was married four times. He is survived by his wife, six children, a brother and a sister. A memorial will be held at 1 p.m. Sunday at Eden Memorial Park, 11500 Sepulveda Blvd., in Mission Hills. 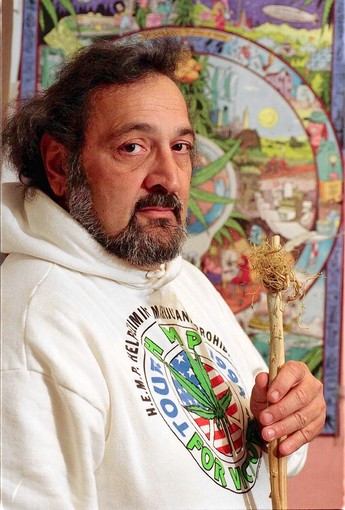 Have a Toke and a Smile
L

Thank you for all you've done for us, it's time for you to rest.
My thoughts and prayers are with all those lives you touched.
I'm so sorry.
Lil

420 Staff
What an absolute loss to humanity.

His legacy lives on however, more than a few peoples eyes were opened to the cause as a result of reading The Emperor Wears No Clothes.

My deepest sympathies to the Herer family
Last edited by a moderator: May 3, 2010
420 Magazine®
Creating Cannabis Awareness Since 1993

RIP Jack Herer! A good man but he was against the Tax,regulate,and control prop coming up in Cali in favor of a real end to prohabition. www.jackherer.com
B