Attorney General Jeff Sessions warned Thursday that federal laws against marijuana still exist and could be used to crack down on state efforts to legalize the narcotic.

In a radio interview with Hugh Hewitt on Thursday, Sessions was hesitant to say what he and the Trump administration plan to do about states that have legalized marijuana in some way. But he indicated some step in that direction could still be taken.

"I do not believe there's any argument that because a state legalizes marijuana, that the federal law against marijuana is no longer in existence," Sessions said. "I do believe that the federal laws clearly are in effect in all 50 states and we will do our best to enforce the laws as we are required to do so."

The use, possession, sale, cultivation and transportation of marijuana is illegal under U.S. federal law, as it is classified as a Schedule I substance. But in 2013, Deputy Attorney General James Cole wrote a memo that said marijuana businesses would not be prosecuted under federal law so long as they comply with state law.

Hewitt argued that a lot of the states are "simply breaking the law."

"And a lot of money is being made and banked. One RICO prosecution of one producer and the banks that service them would shut this all down. Is such a prosecution going to happen?" Hewitt said, asking if one major drug operation is coming to "chill all of this."

RICO – the Racketeer Influenced and Corrupt Organizations Act – is a federal law that is designed to combat organized crime.

"I don't know that one prosecution would be quite as effective as that," Sessions said. "I can't comment on the existence of an investigation at this time. ... You're making a suggestion. I hear it."

In April, Sessions directed the department's Task Force on Crime Reduction and Public Safety to re-evaluate the federal government's approach to marijuana, among other and justice issues. Though the task force did not agree with Sessions' tough stance against marijuana, activists are still bracing for some sort of change.

"We are reviewing that policy. We haven't changed it, but we are reviewing it. We're looking at the states that have legalized or decriminalized marijuana, trying to evaluate what the impact is," Rosenstein said at an appearance at the conservative Heritage Foundation. "And I think there is some pretty significant evidence that marijuana turns out to be more harmful than a lot of people anticipated, and it's more difficult to regulate than I think was contemplated ideally by some of those states." 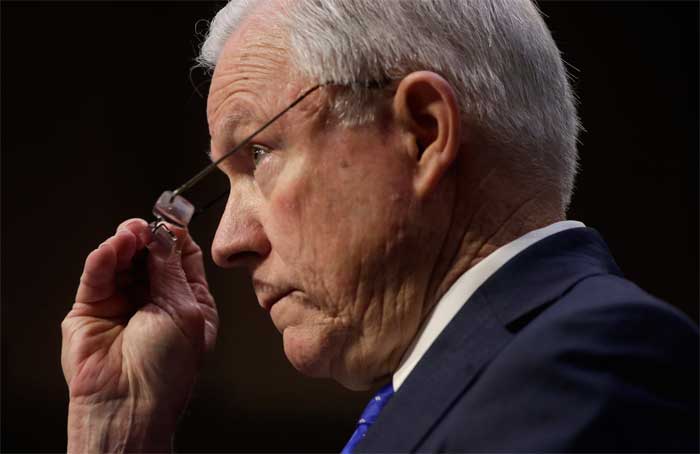