Colorado's cannabis industry has been holding its collective breath ever since President Donald Trump nominated Jeff Sessions for attorney general. And since he was sworn in, Sessions, a proponent of the war on drugs, hasn't been shy about saying that marijuana should remain illegal federally.

In a proactive move, on April 3 the governors of four states with recreational cannabis businesses up and running at the time – Alaska, Colorado, Oregon and Washington – sent a letter to Sessions and Treasury Secretary Steve Mnuchin, urging that federal officials "engage with us before embarking on any changes to regulatory and enforcement systems."

Colorado Governor John Hickenlooper subsequently met privately with Sessions in Washington, D.C., and talked about how this state has been dealing with legalization. After speaking with Sessions, Hickenlooper didn't see the feds butting in. "He has higher priorities," Hickenlooper told Politico on August 1. "Marijuana's not the same threat to this country as heroin, methamphetamine, cocaine — and he recognizes he has limited resources. He said, 'Listen, we're not going to come in and shut everything down.' We have not seen any crackdown. He really said he didn't plan on having a crackdown."

But even if Sessions isn't planning a crackdown, he still has some concerns, which he shared with Hickenlooper in a letter he sent to the governor in late July; he sent similar letters to governors Bill Walker (Alaska), Kate Brown (Oregon) and Jay Inslee (Washington). Read the Colorado letter below; it's similar to those Sessions sent to Brown and Inslee, which their staffs shared with Westword.

Sessions cites rising out-of-state diversion of marijuana, youth use, emergency-room visits and traffic deaths related to marijuana as cause for "serious questions" in his letter to Hickenlooper. The stats he uses, however, are from the Rocky Mountain High Intensity Drug Trafficking Area Report, a report that has drawn criticism for its data-collecting and presentation methods.

In his letter, Sessions also questioned the power of the Cole Memorandum — a set of guidelines from the Obama Administration designed to give federal prosecutors clarity on how to operate in states that have legalized retail marijuana — and said that the Department of Justice's authority to enforce federal law in states that have legalized marijuana remains unaltered.

Colorado state representative Dan Pabon called the letter a "political ploy" by Sessions during a discussion about legalized marijuana at the National Conference of State Legislatures summit in Boston on August 10.

But Hickenlooper's office has taken a more subdued stance. "We welcome the opportunity to work with the Attorney General and arrive at the most effective approach to the states and the federal government working together to protect public health, public safety and other law enforcement interests. We take the concerns shared in the letter seriously and will provide a comprehensive response," Hickenlooper's press secretary, Jacque Montgomery, wrote in a statement to Westword.

Read the full letter Sessions sent to Hickenlooper below: 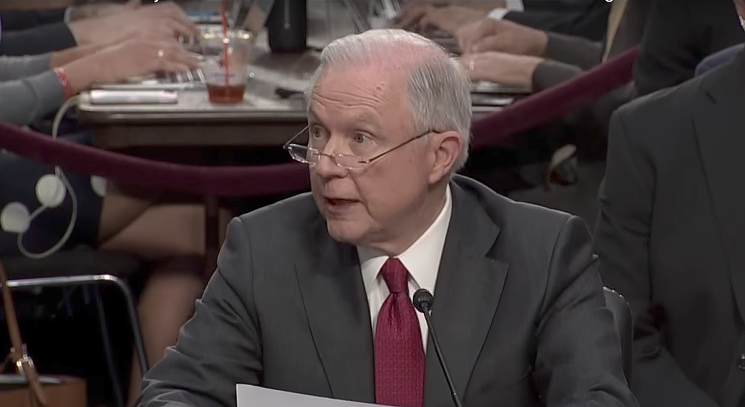