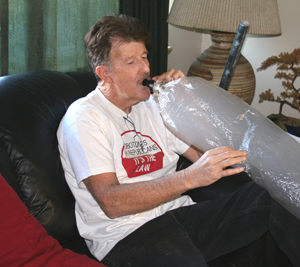 "A few weeks ago, Channel 4 CBS, tried to set up a sting on yours truley. They had a hidden camera on me while I explained to a guy that “just wanted to get high” that I could help him to become a caregiver for medical marijuana. I told him that he couldn’t get pot from me unless he was a caregiver for another patient.

I left the resturant with no transaction but as soon as I went thru the door there was a reporter and cameraman and I was being accused of trying to take advantage of the law. I agreed totally and asked what the problem was. He seemed to think there was something wrong with what I do. I invited him to my garden to film and to talk to some of my patients.

The story on the news gave a shot of YaHooka and the fact I’m called “Governor”. They even went to a thread about a duscussion about getting a street hookup where I made the comment, “Why don’t you get legal and get it from me?”.

They didn’t really have a story but they tried to make my actions look suspect. They failed." -Ken Gorman 02-10-2007

"My name is Ken Gorman. And you? Let’s see some balls.

You forget; the sting was to get some pot illegally from me. Didn’t happen.

The filming and questions lasted for over an hour. They had plenty of story that would have pointed out the lack of medicine and growers. They could have focused on the history of pot I made them listen to. They could have reported on the devastating prescribed medications my patients have to turn to when they don’t have pot.

They didn’t have a story but tried to put the worst possible light on me. That was a consious choice on their part and had they interviewed you they could make you look as bad as you think it did me.

The only thing I misspoke about was the holes. Our law is actually rock solid and a part of our constitution. The caregiver status is fuzzy but totally usable in court, especially in Denver but we’ve won all over the state (are you going to court with patients?). Our “Affirmative defense” to grow as much as the patient needs is great and determined by the patient and caregiver only! If you’re not trying to get caregivers for the best possible medicine, you’re not doing your job.

This law allows every pot smoker in the state to become legal; I use science for my justification. Marijuana (THC) is good for you at any age as reported by CNN’s report on Alzhiemers. The study proved the extraordinary connection to fat cells that contained endocannaboids surrounding new cellular growth for protection. Marijuana cures cancers and so much more. There are plenty of caregiver jobs available and you don’t have to go thru me. Get someone that needs help and grow some fuckin’ pot. Your patient can have 5 or more caregivers so definately go co-op. I’ll give you all the info you need (PM).

My enthusiasm for this miracle plant extends very much to recreational use. People are doing something good for themselves without knowing it and the kids that came to my rallies in the 90’s voted themselves in a very fine law. We have the #’s to control the state as proved by our vote to legalize so some idiot reporter with a hard on against pot isn’t going to deter me from continuing trying to protect those that need protection." -Ken Gorman Feb 15th, 2007


Two days after the CBS 4 News in Denver report aired. He would be murdered in cold blood in his own house. Nothing was stolen. Not one of his plants, but someone who saw that report wanted Ken Gorman’s mission to be halted.
His Mission : Ken Gorman Memorial

Colorado marijuana activist Ken Gorman, 59, was shot and killed in his Denver home Saturday night in an apparent home invasion robbery. The killing came just days after local TV station CBS4 aired a report on him that included shots of marijuana plants growing inside his home. Gorman grew the plants legally as a registered medical marijuana patient, but in the report, Gorman was seen advising avowed non-medicinal marijuana users how to use the medical marijuana laws to be able to possess the plant with impunity. As of Thursday, no arrests had been made and police said they were still investigating.

Gorman was one of the most well-known faces in the Colorado marijuana and medical marijuana scene. He was also a member of DRCNet. Gorman had organized several smoke-ins at the state capitol, as well as giving numerous lectures and making public appearances supporting the medical and recreational use of marijuana. He also ran for governor on a pro-marijuana platform.

According to witness accounts, three masked men entered Gorman's home with guns drawn Saturday evening. Shots were fired, police were called, and they found him lying on his living room floor with a gunshot wound to the chest. He was pronounced dead shortly after.

While Denver police refused to speculate on whether the killing was related to Gorman's legal medical marijuana grow, fellow activists had little doubt that he died in an attempted robbery. "It's pretty amazing that this guy worked his entire life trying to make marijuana legal and in the end, the fact that marijuana is illegal is what led to his death," Mason Tvert, executive director of SAFER, an organization dedicated to legalizing small amounts of recreational marijuana, told the Denver Daily News. "It's safe to say that if marijuana were legal Ken would not have been killed," Tvert said. "I think it's a violent incident highlighting what happens when marijuana is kept illegal."

Gorman himself had told CBS4 just a few weeks ago that he feared being robbed because of his openness about his marijuana operation. "I mean, I've had a gun stuck to my head, people stabbed in my house from people trying to get my marijuana," Gorman said on January 31. He added that his home had been burglarized 15 times.

Gorman will be missed. "I've been in patient meetings where patients stood, with tears in their eyes, and said, 'When no one would help me, Ken Gorman would,'" said Brian Vicente, executive director of Sensible Colorado, a nonprofit organization that advocates for drug policy reform in Colorado. "You don't hear that, that often," Vicente told the Daily News. "He was a character." Source

Bio:
Gorman graduated from Denver's Lincoln High School in 1964. As his father had before him, Gorman joined the Air Force, working as an air traffic controller. He worked in Vietnam, Papua New Guinea, and the Philippines. He was stationed near Miyakojima in Japan at a long-range radar facility during the Vietnam War. His first wife introduced him to marijuana in Loveland, Colorado in 1969. Gorman was often quoted as saying "It has been a friend of mine ever since." He went on to a career with the FAA as an air traffic controller. On August 5, 1981, while stationed in Hawaii, he was fired by Ronald Reagan along with 11,358 other PATCO (Professional Air Traffic Controllers Organization) members who were on strike.

After that, he worked in Papua New Guinea, recruiting students for "western-style" schooling. Around 1984, he became very friendly with the natives and gave them a public voice with radio broadcasts and newspaper articles about natives rights. He was arrested and charged with many crimes. He was only convicted on possession of pornography (a Playboy magazine). He was given a plane ticket to Manila, some spending money, and was escorted to the airport. Gorman's good friend, Pious Wingti, took power in 1985. Wingti's election victory was significantly due to the public outrage over Gorman's deportation. Later, he assisted the Philippine rebels in their quest to overthrow Ferdinand Marcos. He was forcibly deported in 1985. The Filipino people succeeded in deposing Marcos the following year.

In 1992, while doing business-to-business sales for Video Professor, he read The Emperor Wears No Clothes by Jack Herer. Learning about "the marijuana conspiracy" made him so angry that he dedicated his life to revealing the truth about hemp and marijuana. Gorman started a company selling hemp products. He advertised marijuana in Denver's Westword Newspaper, on the locally famous "Back Page". The ad read, "MARIJUANA - FREE DELIVERY - NO COPS - NO JOKE". Later that year, Gorman started holding "smoke-ins" on the steps of the Colorado capitol building. One of his 1993 rallies featured "The Emperor Of Hemp", Jack Herer. He ran for Colorado state governor in 1994 and 1998.

In May 1999, Gorman allowed himself to be arrested for selling three pounds of marijuana to a police informant who claimed to be buying it for medicinal purposes. Gorman served six months in the Jefferson County jail, 16 months in a CaÃ±on City minimum-security facility, 18 months in a halfway house, and two years wearing a monitoring ankle bracelet. In 2000, Colorado adopted a constitutional amendment creating a medical marijuana system. After realizing the severe lack of medical grade marijuana available for patients, Gorman worked tirelessly to sign up caregivers to increase the availability of medicinal marijuana. He supported Libertarian candidates Rick Stanley for Senate and Boulder's Ralph Shnelvar for Governor in 2002.

The rallies continued several times a year, but Gorman had to "officially" remove his name as organizer due to the RAVE Act of 2002 and the Illicit Drug Anti-Proliferation Act of 2003. He supplied as many patients with caregivers or medicinal marijuana as he could. In 2004/2005, he was a featured speaker at meetings of the Colorado Compassion Club in Denver. On February 17, 2007, in Denver, Colorado. Source

Edit:Sorry if necroposting is frowned upon, I just had to share.

^ not a problem
420 Magazine® Your Best Choice For Cannabis News

ken was takin but not unheard ,we have come along way after he was murdered outside his home . i remember him fighting for our rights when i was in school , even say him at the steps on a hemp ralley with a six foot bong , so to him thank you .

great post.Some friends and I met him at Taste of Colorado in '94. We just finished smoking a joint in Civic Center park, he came by passing out flyers and we talked with him for a few minutes.
1st CFL Grow Diary - Blueberry LST
M

I will never forget you and your courage and wisdom !!!
420 Magazine®
Creating Cannabis Awareness Since 1993

Death Of Med-Pot Advocate Could Lead To Changes

W
No One's Told Drug-War Soldier About Peace Breaking Out