Kentucky's first legal hemp production in at least 50 years will include five projects in conjunction with state universities to test whether the crop can help clean soil on former industrial sites, Kentucky Agriculture Commissioner James Comer said Monday. Each of the projects will be paid for through private contributions and will focus on different possibilities for hemp, which has long been illegal in the United States along with marijuana – its more potent cousin. A provision in the new farm bill allows for the pilot projects.

In Louisville, Ky., the state's Department of Agriculture will oversee hemp farming on an as-yet-undetermined former industrial site to see whether the the crop can help clean tainted soil. The project is expected to be in conjunction with the University of Louisville, Comer said, adding that more projects could be authorized. University of Louisville spokesman Mark Hebert said the university hasn't agreed to its role yet but said officials plan to talk more with Comer and city officials about how the university can help research new ways to reclaim polluted property.

Chris Poynter, a spokesman for Louisville Mayor Greg Fischer, said hemp can help pull many contaminants out of the soil of former industrial sites, a valuable step toward potentially redeveloping so-called brownfields. Poynter confirmed that Comer and Fischer talked in recent weeks and that Louisville Police Chief Steve Conrad has consented to the idea of a pilot effort, though no site has been decided. "The mayor is interested in anything that can help us remediate brownfields, and this could be a pretty innovative, unique way to do it," Poynter said.

Research first
Comer hopes that the farm bill will allow hemp production for sale, not just research, but he said his staff is researching the question with Attorney General Jack Conway. "When we get that question answered, that's going to determine how much hemp's planted," Comer said. But the first year of hemp production probably will focus on research and development, he said. "You're not going to see any major industries spring up, I don't think, because we've got a lot of research and development to do, from a basic agriculture production standpoint, before we can really encourage farmers to move (forward) with this," he said. Despite the lack of details, Comer said he made the announcement Monday because some of the initial projects involve Eastern Kentucky, and he was in Knott County to announce a new agricultural marketing initiative.

- A study of a "Kentucky heirloom hemp seed" at a plot in Eastern Kentucky. The project will work with what is believed to be old Kentucky hemp seed, in conjunction with Kentucky State University and the department's Homegrown by Heroes program for military veteran farmers.

- A Western Kentucky effort, in conjunction with Murray State University, to examine how well European seed for hemp grows in Kentucky.

- A Central Kentucky pilot program, with the University of Kentucky and Eastern Kentucky University, focused on basic agricultural issues involved in industrial hemp production. Those include production cost and machinery for planting, harvesting and transportation.

- A second project through the University of Kentucky will focus on cultivating hemp in Eastern Kentucky for medical research.

Comer spokeswoman Holly VonLuehrte said farmers will be able to sign up through the Agriculture Department's website and be linked to one of the university-affiliated pilot programs that will grow the hemp. The department will administer the program, while the universities will conduct the research.

Questions remain
Hemp once was legal and did well in Kentucky, which was the nation's dominant producer in the mid-19th century, according to a University of Kentucky study last year, before the plant's fiber lost out to cotton and other imports. That study questioned the modern potential of hemp in Kentucky, saying it could be profitable for farmers in some areas – but not all – and probably wouldn't result immediately in the thousands of new jobs that supporters predict.

The study said hemp's greatest potential is cultivating its seeds as an ingredient in food, fuel, paint and personal-care products. Questions about the extent of the market for hemp products may not be answered by the pilot projects, Comer said. But he said he hopes that early involvement might result in Kentucky's being among the first states to increase hemp production, which would encourage processors to locate in the state and lead to more jobs. "We have farmers that ... don't expect to make a penny on it," he said of the pilot projects, but will participate "to help with the cause, because they believe in it."

The pilot projects are made possible by a provision in the new farm bill that President Barack Obama signed into law. U.S. Sen. Mitch McConnell, the Republican minority leader from Kentucky, worked with a farm bill conference committee to get the pilot project language. Last year, the Kentucky General Assembly passed Senate Bill 50, championed by Comer and U.S. Sen. Rand Paul, R-Ky., to provide a regulatory framework for hemp production in Kentucky – should the federal government legalize it. Nine other states allow the cultivation of hemp: California, Colorado, Maine, Montana, North Dakota, Oregon, Vermont, Washington and West Virginia. 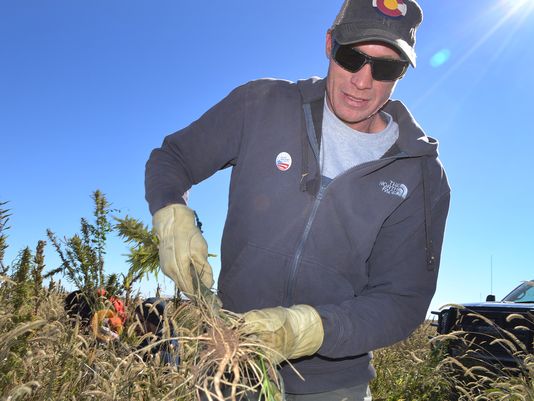 My guess is that it will work to recondition the soil and this is one avenue I never thought of. Interesting.