Kentucky is accelerating hemp production in the third year of testing its potential as a cash crop.

The state Department of Agriculture said Friday it has authorized planting of nearly 4,500 acres of hemp this year in the next round of statewide pilot projects, up from about 900 acres of hemp production last year. The experimental projects began with a mere 33 acres in 2014.

The momentum is continuing after a change in leadership at the Agriculture Department.

The rebirth of legal hemp production was championed by then-state Agriculture Commissioner James Comer. Comer ran for governor last year, losing in the Republican primary to Matt Bevin. But his successor as agriculture commissioner, Ryan Quarles, has assumed the role of advocating for hemp.

"Hemp is a bridge from Kentucky's past to our future," said Quarles, a Republican. "The Kentucky Department of Agriculture and our partners are committed to building upon the solid foundation of research for a Kentucky hemp industry that will create jobs and new marketing opportunities."

Kentucky has been at the forefront nationally in efforts to return hemp to mainstream status.

The tiny experimental crop produced in 2014 was the first legal hemp crop in generations in Kentucky.

Growing hemp without a federal permit was banned in 1970 due to its classification as a controlled substance related to marijuana. Hemp and marijuana are the same species, Cannabis sativa, but hemp has a negligible amount of THC, the psychoactive compound that gives marijuana users a high.

Hemp got a limited reprieve with the federal farm bill, which allows state agriculture departments to designate hemp projects for research and development in states such as Kentucky that allow hemp growing.

Hemp is prized for its oils, seeds and fiber.

The crop, which once thrived in Kentucky, was historically used for rope but has many other uses, including clothing and mulch from the fiber; hemp milk and cooking oil from the seeds; and soap and lotions. Other uses include building materials, animal bedding and biofuels.

In Kentucky, the number of university-led hemp research projects had more than doubled since 2015, the state Agriculture Department said. The focus is expanding beyond production research to look into how the crop can be turned into consumer products.

KDA said it is offering multi-year partnerships with processors to develop information on processing and marketing potential.

Quarles also said his department is working to ensure that hemp producers can obtain seeds.

Kentucky farmer Michael Lewis said he's preparing for another year of hemp production to test its potential in textiles, health and nutrition products.

"That shows the potential, that shows the interest, that shows the investment," he said of the plans for increased production in 2016. "I think we're getting there. We still have a lot of processing hurdles to overcome. But that's the same with any new industry. I'm feeling good about it." 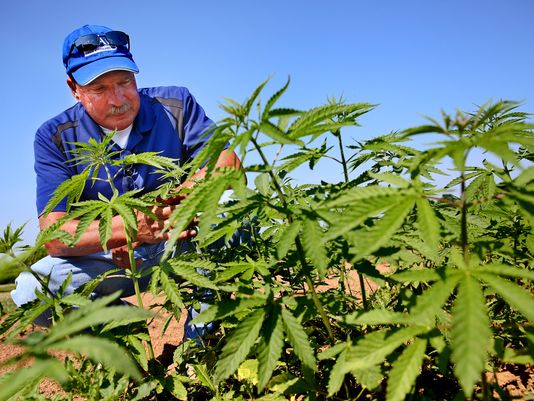