KS: An Oil For Every Ailment

A local Emporia business is using a misunderstood form of natural medicine to treat ailments both common and uncommon.

Located at 1117 Commercial St., the new CBD American Shaman store specializes in the sale of health and beauty products containing cannabidiol oil. An extraction from the hemp plant, the oil has recently come to the attention of the medical community for its wide range of uses. Unlike cannabis, the hemp oil products sold at CBD American Shaman do not contain any THC – the principal psychoactive component of the plant responsible for the euphoric "high" feeling.

In a moment of pure chance, owner Beth Johnson came across the product she now sells and swears by.

"I have a neighbor who fixes computers. He was over at my house and I saw something drop out of his pocket," Johnson said. "It was a bottle of CBD oil, and I asked him more about it. He said he had recently started up another branch for American Shaman in Lawrence. I asked to try some and the first time I did it, my pain went away. I had been struggling with chronic pain for 27 years and the doctors had just kind of told me to deal with it. When he told me about what a great opportunity it was, I told him I wanted to invest in it."

In just a couple short weeks since opening, Johnson has been thrilled and surprised with the amount of customers who have seen sudden reductions in the severity of their symptoms.

"There's an endocannabinoid system in the body which houses cannabinoid receptors just waiting for CBD," Johnson said. "When CBD meets up with these receptors, it releases serotonin, which is a powerful anti-anxiety and antidepressant agent. Most antidepressant pills release serotonin in the brain. CBD oil also helps the endocannabinoid system release a powerful anti-inflammatory. Inflammation is seemingly involved in just about every illness, and so when you fight it, you're also going to fight pain."

Johnson currently treats individuals suffering from chronic pain and headaches, rheumatoid arthritis, multiple sclerosis, Parkinson's, Crohn's and acid reflux disease with various strengths and flavors of water-soluble CBD concentrates, tinctures and even gummies. Animal-friendly versions of the products – including meat and fish flavored water additives – are also available to treat the same ailments in household pets and horses. Not only is CBD oil used to treat more serious mental and physical ailments, it can also be used for skin care. CBD American Shaman stocks various lotions, creams and serums used to treat eczema, psoriasis and acne.

Because CBD oil products have shown their many effective uses to Johnson, she finds the misinformation surrounding them to be even more troubling. One of her major goals is to educate the Emporia community in fun and accessible ways. Dec. 30 marks a chance for those curious to come see what CBD is all about as Johnson will host a New Year's Eve Eve party at the store. The festivities will begin at 5 p.m. and include CBD shots in four different flavors. No ID is required to partake.

"Probably the biggest misconception floating around is that CBD oil will make you high. That also makes people concerned about its legality," Johnson said. "People need to understand that there's zero THC in our product and that it's 100-percent legal. They'll pass any kind of drug test. They also need to know that the American Shaman brand is the strongest, purest CBD available in the United States."

Above everything, Johnson hopes to leave work each day having shown someone new that they no longer have to live with chronic emotional or physical pain.

"Apart from spiritual deliverance, there is no more profound way in which to help people than to relieve their pain," Johnson said. "I pray every day that God may send me people who can experience relief from their symptoms simply by using CBD." 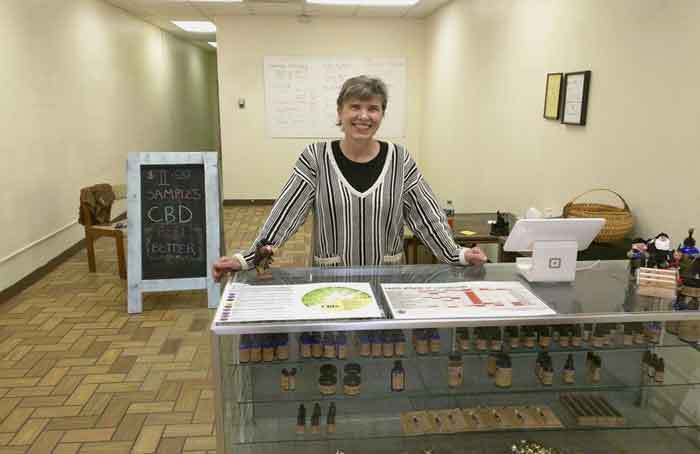