A proposed amendment to Sen. Paul Hornback's industrial hemp bill would result in Kentucky being left behind when the federal government legalizes industrial hemp production in the United States, members of the Kentucky Industrial Hemp Commission said Thursday.

Agriculture Commissioner James Comer, chairman of the commission and a supporter of Senate Bill 50, and others are worried that the amendment strips the administrative framework from the bill that would help Kentucky's federal delegation pursue a permit from the Drug Enforcement Administration to allow Kentucky to grow industrial hemp, according to a press release from Comer's office. Other aspects of the amendment received mixed reviews during the commission's meeting Thursday in Frankfort.

"I am open to compromise language as long as it does not delay the quest to put Kentucky first in line for the jobs industrial hemp would create," Comer said. "If we have to wait for another study, 49 other states will be growing hemp. I think I speak for the commission when I say we trust Sen. Hornback to guide this legislation to a successful conclusion."

Republican Caucus Chairman Bob DeWeese said his caucus was supportive of the hemp efforts and that he appreciated the commission's hard work on the legislation. Democrat Rep. Tom McKee, chairman of the House Agriculture and Small Business Committee and a commission member, told the group he was proud that the original SB 50 passed his committee with a vote of 24-1.

"With the vote in the House committee, 25 percent of the House has already voted for this bill," Comer said. "I believe if the original SB 50 comes to the floor for a vote, it will pass by an overwhelming margin."

The commission also heard a report on biofuels, another industry that has expressed interest in using industrial hemp. This led to a discussion of moving forward with the DEA permitting process. Former Democrat State Treasurer and commission member Jonathan Miller, who has close ties to the President's administration, said all indications are that hemp production will be legal in this country very soon.

"With such bipartisan support, I believe our message is resonating in Washington," Miller said. "There are many talks about legalizing hemp at the mid- and upper-levels in the federal government, and a federal change could happen any day now. We have to be ready."

Hornback told the group he is set to meet with Adkins on Friday at 11 a.m. 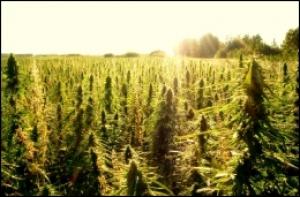