LANSING -- Lansing's new ordinance regulating medical marijuana businesses will expand the commercial zones in which they are allowed and offer one year for current operations to relocate.

The decision, reached late Monday night, also will place a cap on the number to be allowed within city limits. That figure will be determined by a council resolution at a later time.

Council members debated the policy for hours Monday as they tried to reconcile their own suggestions with a draft version from the council's public safety committee. The committee Monday agreed to a one-year grandfathering clause for the 48 businesses in operation before a moratorium took effect in December, as well as the cap.

That moratorium on business licenses ends Friday. The public safety committee, comprised of councilwomen Carol Wood, A'Lynne Robinson and Tina Houghton, will meet Thursday to propose license fees and the number of marijuana dispensaries to include in the cap. The full council could adopt those items at its next meeting July 7, city Clerk Chris Swope said, adding that the policy will take effect but no licenses can be granted until after a fee schedule is set.

Medical marijuana cultivation and distribution businesses will be allowed in industrial and commercial zones, the latter of which includes major corridors such as Michigan Avenue. New businesses will be required to stay 1,000 feet from schools, churches and other marijuana businesses and have to submit evidence of a building lease with their application. Consumption of marijuana will not be allowed on site, a change from a draft version that would have allowed it for instructional purposes.

Council Vice President Kathie Dunbar said opening up more commercial zones will give dispensary owners more places to relocate, as well as prevent them from going to strictly industrial zones that are more isolated.

But, she added, "When I say spread out, I don't mean proliferate everywhere."

The issue grew heated as the council vote neared. Residents and business leaders, especially from the city's east side, publicly called on council members to extend their moratorium. But City Attorney Brig Smith said doing so this close to its expiration would pose a legal risk, in that an extension is itself an ordinance.

A draft ordinance moved out of the council's public safety committee earlier in the evening called for limiting dispensaries to industrial and some commercial zones, but some council members wanted to add more zones to prevent clustering in one area.

Earlier, the public safety committee backed away from an idea to grandfather in the 48 dispensaries in operation prior to the moratorium that expires July 1, instead opting to give them one year to relocate in order to comply. The committee also placed a cap on the number of businesses to be allowed in city limits, a number that would be decided by a resolution at a later date.

Support for the committee's zoning guidelines was divided.

Councilman Derrick Quinney introduced six additional business and professional zones, saying it was an effort to remove some of the community's issues with clustering.

This is "out of concern over what is the situation right now," Quinney said. "My intent is to balance this throughout the city."

Eastside residents are concerned about the numerous shops that have located along Michigan Avenue in their neighborhood. Dispensary managers have said they are operating under long-term leases and their patients have come to depend on them in their current locations.

"I am for regulation, for sure. I am for compliance, definitely," said Shekina Pena, owner of the Your Healthy Choice dispensary. "I'm not for a sunset time."

The idea of limiting business in certain areas, such as along Michigan Avenue, is akin to not wanting too many pharmacies or car dealerships in the same place, said Bill Skiba, a Lansing resident who said he lives two blocks from a dispensary. 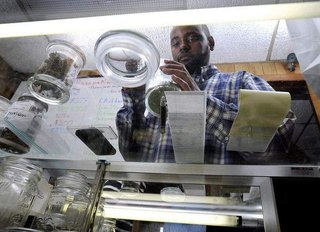