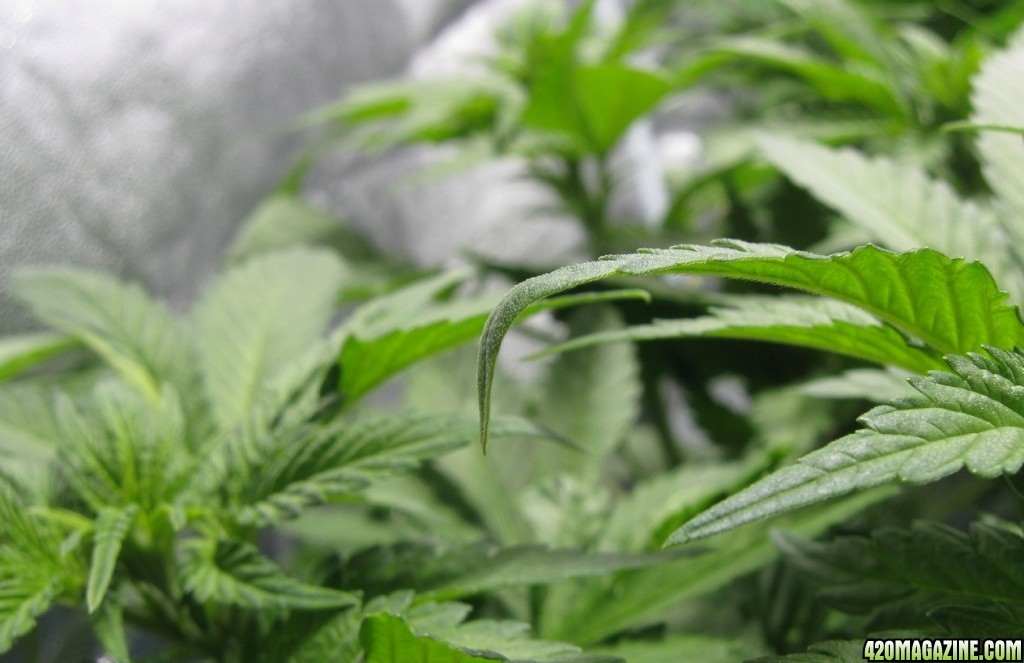 This is not my plant but the clawed tip looks EXACTLY what I see.

I am confused since I don't see any way that the plant I grow has Nitrogen toxicity (as the article suggests where I found the image).

Some of the lower leaves had turned yellowish, so I was strongly assuming N *deficiency*, but then I found this blog with the picture and the claw and they suggest TOXICITY.

I am feeding my plant that is vegging (about 1 month or so) Floranova Bloom (mind you: BLOOM, 4-8-7) which doesn't have too much N in it anyway, and rather than giving 2ml/L or even 3.75ml/L (which is suggested max strength for "rapidly growing plants" I feed 1.5ml/L, which is actually really, really low. In fact I gave so little nutes the last weeks (in my Hempie buckets/hydro) that my first guess was deficiency but NO WAY for "toxicity"

However, there is just one thing maybe noteworthy to mention: I am feeding Floranova Bloom from my old bottle which is ALMOST empty. There is only like a tiny 10ml or so left now, and the solution definitely started to crystalize a little. (But I can still shake, mix and pour it).

Is it possible that the crystallized remains in the bottle somehow resulted in the nuts having more N or something since I can really in no way understand how I could have N toxicity...

Thanks!
My Journal: "A Challenging Grow": Newbie Grows In Brutal Heat in a Greenhouse in Spain

(pic added)
My Journal: "A Challenging Grow": Newbie Grows In Brutal Heat in a Greenhouse in Spain

IIRC, that's a pretty thick nutrient. Have you shaken the living daylights out of it (and not for just a few seconds) every single time that you've used it, to make sure that you've been getting a good mixture of the bottle's contents? If not, I suppose it is possible that what remains in the bottle is stronger than the concentration that it was bottled at.

I have heard of people adding an equal amount of hot water to the dregs of a bottle (and shaking it madly for two or three minutes like you're trying to mix a gallon of paint without using one of those vibrating mixer machines), then doubling up on the mixing amount each time thereafter. The hot water is supposed to help redissolve anything that has precipitated out. IDK, personally, but it seems to make sense to me.
Respectfully,
Tortured Soul

Democracy is two wolves and a lamb voting on what to have for lunch. Liberty is a well-armed lamb contesting the vote.-Ben Franklin
Everyone is entitled to their own opinion, but not their own facts.--Daniel Patrick Moynihan
Life'll Kill Ya.-Warren Zevon
The dinosaurs became extinct because they didn't have a space program. -Larry Niven
The more people involved in something, the shittier it tends to be. Microsoft has approximately 188,000 employees. . . .
F

Yeah I heard that about the liquid but I started the new bottle now anyway.
(And yes I am shaking it like crazy every time)

For now I am just continuing feeding as normal, 1.5-2ml/L and see how it goes. Might upload a picture of the real plant later. N tox is still unlikely to me.
My Journal: "A Challenging Grow": Newbie Grows In Brutal Heat in a Greenhouse in Spain

One true sign of nitrogen toxicity is very dark green leaves which I don't see in the picture. I have seen claw on my plants before I even gave them any nutrients and my soil didn't have any added either. Based on the NPK of the plant food you are giving I would say it's a deficency of nitrogen. They need a 3-1-2 ratio of nutrients. Your giving them roughly a 1-3-2 ratio.
Critical Jack and Dark Devil Auto cross in Doc Bud's Kit. Completd, 2018
Journeying into the unknown with Doc Bud's kit. Completed, 2017​
F

Well I grew a bunch of strains previous season with the same regimen and exact the same nutes, and they grew EXCEPTIONAL (until the cops came and took them), but I am serious.

It might be strain depending. (I grow "Somango" this time, only one single plant).

I know it's pathetic not to upload a picture, but I just know how it'll go usually and that every time I have same plant diseases it could be a number of various things and diagnosis is rarely 100%.

What I noticed this time, and what I have never had before is the leave tips bending down almost 90 degree, exactly like in the picture. The leaves that bend are also feeling dry and brittle where they bend down. It's definitely no "overwatering claw", that's for sure.

Some lower and some middle leaves are yellow with brown, necrotic spots. (Ca deficiency or Fe deficiency I'd say)

According to some charts, Iron deficiency...or almost 99% SOME deficiency, CaMg, Fe and/or N.

Since I grew last time without ANY problem I am now just continuing regimen. Two days ago I did a CalMag foliar feed. But this is as far as I know to do, otherwise it's strain-related and I wouldn't really know what else to do.

I ALSO have a nasty white fly infestation, but I am spraying them with Insecticidal Soap/NEEM for the last few weeks hoping to get it under control.

(I am saying "strain related" since the official description for Somango recommends to grow them in soil/organic....and curiously also says that Somango doesn't do well outdoors. So this seems like it's more finicky to grow as compared to some other strains). And I still don't want to discount the possibility that this crystallized rest of nutes which was in the bottle and which I used previously might have something to do with it.

Edit: As for your comment with the nutrient ratio, you may well be correct.
But I am feeding according to Lucas formula (as said no problem in the previous seasons) which would be 2.11ml/L of Floranova Bloom.....where the guy says that this should cover all the bases.
My Journal: "A Challenging Grow": Newbie Grows In Brutal Heat in a Greenhouse in Spain

You cant go wrong with flora nova bloom or any lucas feed regiment . Sounds like a strain related sensitivity to me I have seen it the claw and other deficiencies show up randomly seemed pheno related. But hey I have no rep so...
Dragons in Coco

You get what you give.

S
Leaves have The Claw?