At least 63 people were arrested over the weekend on suspicion of possessing less than an ounce of marijuana after police were unable to identify the actual owner of the drug stash found at a house party in Cartersville, Georgia, over the weekend.

Cartersville police said they arrived at the party – billed as a lingerie-themed 21st birthday bash, according to WXIA-TV – about 2:20 a.m. Sunday after receiving a 911 call about possible gunshots. Police, who called in the county drug task force to assist in the investigation, said they found two firearms at the scene, including one that had been reported stolen in Detroit, as well as "several smoking devices" and "suspected cocaine."

Officers also found less than an ounce of marijuana, reported the Cartersville Daily-Tribune. When no one admitted to owning the weed, everyone still at the party was arrested.

"All the subjects at the residence were placed under arrest for the possession of the suspected marijuana which was within everyone's reach or control," said the Bartow Cartersville Drug Task Force in a news release.

Citing jail records, the Daily-Tribune reported that 63 people arrested at the party who'd been processed at Bartow County jail by Monday night had all been charged with a single count of possession of less than 1 ounce of marijuana. The individuals arrested were predominantly black males ages 19 to 25. The Daily-Tribune said several of them were "prominent high school athletes."

Attendees told WXIA that the reported gunshots had been fireworks.

Deja Heard, the woman whose 21st birthday was being celebrated at the party, told WSB-TV that "all of us are innocent – it's just not right."

Some of the arrested partygoers reported being mistreated by police, telling WSB that they were "tied up with zip ties." and "threatened with tasers." Several men said they'd been "locked in cages."

The Georgia NAACP said it was launching an investigation into the arrests. The organization has backed a GoFundMe campaign to raise funds for the arrested partygoers, described as the "Cartersville 70."

"Some of these young people need money to make bail and all of them need assistance with their legal fees. A good majority of these individuals are college students and members of the U.S. military who were visiting home over the holiday break, and decided to attend a party to catch up with old friends while in town. Others were working citizens who lost their jobs the second they walked into work this morning," the campaign page reads. "They need your help to bring justice and light to the unjust treatment these individuals experienced leading to and during their incarceration."

On Tuesday, Cartersville police said in a statement that they would be reviewing a "long-standing" department policy to call the county drug task force during drug investigations. 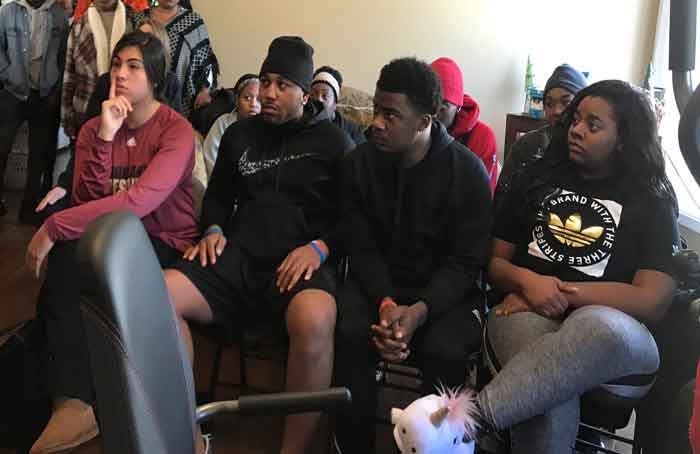 Wow, going to that party sure wasn't fun at all.
"The United States is a nation of laws: badly written and randomly enforced."
Frank Zappa
F

Bad conduct discharge for any soldier convicted of any drug charge or for driving under the influence.
B

Wow, Mr. Fatman, 63 people arrested for being in the area of dried plant, how do we know if any soldier smoked anything before jumping to what should be done with them but we do know if Nana or Pawpaw were there or the reverend they'ed too have a misdemeanor drug charge. The NAACP need's to get out of there crying/investigation game and step up and coordinate with organizations like NORML or The Georgia Care Project, to get legislation changed to stop these type of arrests.
F

Bobby, I am not saying that is what should be done. I am just implying that is how rough they are treating their own. DOD employees get fired if drug use is proven. Such a simple thing as possession ends the career of military and federal employees. Drunken driving is the end of an army career and most civil service p\employees. They are really playing hard ball with military and DOD employees.
B

I got it, we're seeing the same thing, there are so many today of all races using cannabis to help with various ailments physically and psychologically, young people, old people, and infants, its proven positive results and recorded as such. Cannabis will become legal in the U.S. sooner than we think, thank you Jeff Sessions for pissing off the right people but what about the well over a million people and their loved ones, of all races, some of which you mentioned who have lost so much and cannot currently get a decent paying job, vote or even get into this new industry due to a bull sh$% "Cannabis"drug conviction or plea deal, we must make damn sure when we turn the corner on this thing, that they, the states, congress, and the DOJ don't weasel out of restoring these people status/rights as full citizen's by throwing out and turning over all cannabis convictions that apply.

I like how you use the phrase "of all races" as if that suppose to take away from the fact that this article is about how BLACK people are targeted the most over this. They arrested 60 people over less than 1 oz of weed. If you're saying that if it was 60 white people and lesss than an oz and all 60of them would've been arrested then you're mistaken. Please don't be this blind
AlienAthena’s 2019 Soil Grows
B

Thank's Alien A, this is the appropriate use of "all races" in my reply, because all races do apply, there is no question that black and brown people take the brunt of this attack but now there are many more communities/cultures in our cities and towns and in many cases they face the same discriminations and prejudices as black and brown people and that goes to their young people too who are no different than any other young person, wanting to have fun and enjoy themselves, their music and in some cases thats smoking the bud too, which could get them arrested. There is no question that Black Americans are unfairly treated in the justice system but their not the onliest ones being targeted, the equitable sharing act, law enforcement being able to take all that you own and do not have to charge you with anything, and they've been tearing all kinds of decent people new ones with that crap. Instead of assuming I'm blind, maybe you could open your eyes a little more and see that, if you can only identify with one group of people in a struggle and not all that are in that same struggle, you'll always stumble, you can't unify if you don't identify.

4
Pounds Of Weed In Traffic Stop