Gary Johnson has always been the outsider when it comes to politics, and that fits him just fine.

After quietly dropping out of the GOP presidential race following a disappointing campaign, Johnson reemerged as the Libertarian Party's front-runner with his call for lower taxes, business privatization and protection of civil liberties appealing to voters disenchanted with both the Republican hopefuls and President Barack Obama.

As a third party candidate, if Johnson wants to garner any significant portion of the vote he has two major hurdles he needs to clear: his lack of name recognition and his advocacy for legalizing marijuana.

During his tenure as two-term, Republican governor of New Mexico, Johnson drew criticism from both sides of the political divide for his vocal support of legalizing marijuana, earning himself the nickname "Puff Daddy Johnson" by then-President Clinton's drug czar Barry McCaffrey.

Instead of turning-tail on the issue, Johnson turned the marijuana legalization into a major component of his border security policy.

"It should not be under-emphasized how much the violence on the border has to do with the prohibition of drugs," Johnson said to Fox News Latino. "I think if we legalize marijuana, we will take a huge step toward a rational drug policy."

According to the conservative think tank, the RAND Corporation, around $8.57 billion go to the Mexican cartels from marijuana, the most of any illicit substance by a long shot.

Johnson's views on legalization seem to be gaining some footing among the general U.S. public, as a recent Gallup poll suggested that 50 percent of Americans support legalization and 17 states have already passed laws permitting marijuana use for medicinal purposes, including New Mexico, New Jersey, California and Delaware.

As a side-benefit, his refusal to back-down on legalization also earned him the endorsement of the National Organization to Reform Marijuana Laws (NORML) and country singer Willie Nelson.

Along marijuana legalization, Johnson also argues the idea that a fence along the U.S.-Mexico border will not stem the tide of immigrants and illicit substances entering the U.S., and of weapons entering Mexico. "It's a no brainer," Johnson said about the border fence. "Don't build a fence; it's an incredible waste of money."

Johnson also argues that the fence hinders legal immigration to the U.S. "There are 11 million illegal immigrants in the U.S. and we need to understand the reason why they're here," Johnson said. "We should make it as easy as possible for somebody to come into the country who wants to work."

This puts the former New Mexico governor in direct opposition with his state's neighbor, Arizona. After Arizona Gov. Jan Brewer signed the controversial immigration law SB 1070, which required among other things for police officers to check the immigration status of people they suspected to be in the country illegally, Johnson was among a slew of politicians to oppose the bill.

What is the LEAST Latino State of the Union?

In comparison, Johnson's home state seems almost idyllic for Latinos -- even though the current governor, the Mexican American Susanna MartÃ­nez, has taken a hard-line stance on immigration.

With almost half of the states population and legislature being Hispanic, New Mexico has a history of embracing civil rights protections under the state's constitution.

New Mexico is one of the few states that allowed undocumented immigrants to obtain driver's licenses as a public safety precaution, a measure that weathered MartÃ­nez's failed attempt to repeal it earlier this month.

MartÃ­nez, a Mexican-American Republican who followed Democrat Bill Richardson into office, is a different type of Republican governor than Johnson was. Unlike Johnson, MartÃ­nez is pro-life and is opposed to same sex marriage and New Mexico's medical marijuana program.

The current governor also signed an executive order in January of 2011 that rescinded sanctuary status for undocumented immigrants who commit crimes in New Mexico.

During his time in office, Johnson didn't make waves with immigration like he did on the marijuana issue. Instead he focused on his state's economy lowering taxes 14 times and building a $1 billion budget surplus, which gave him an almost 60 percent favorability rating when he left office in 2002.

Following him in office was Democratic Gov. Bill Richardson, a Mexican-American who was praised for keeping up Johnson's call for fiscal responsibility by issuing tax cuts as well as signing a bill in 2007 that legalized medical marijuana.

As a GOP presidential candidate, Johnson tried to ride his outsider status and success in the New Mexico governor's office to the Republican bid. However with the media focusing its attention on the likes of former Massachusetts Gov. Mitt Romney and former Pennsylvania senator Rick Santorum, Johnson didn't get much time in the spotlight.
In New Hampshire, a state where he campaigned heavily, Johnson didn't even garner an invite to the CNN debate in the state.

"I have been deeply disappointed by the treatment I received in the Republican nomination process. I had hoped to lay out a real libertarian message on all the issues in the Republican contest. The process was not fair and open," Johnson said on his website.

With the treatment he received (or lack thereof) during his GOP run souring him to the party, Johnson decided to take his talents to the Libertarian Party. "This election is about issues larger than party or personal ambition.

The future of our country is at stake," he said.
"I don't see a big difference between Obama and the Republicans," Johnson said. "It's one thing to talk about the problems, it's another thing to do something about them."

Celebrities Who Once Were Undocumented

Despite his success in the hyper-verbal world of politics, Johnson is a person that seems to be more about actions than words. Johnson has climbed Mt. Everest (losing part of his toe to frostbite), competed in five Ironman triathlons and took supporters on a backcountry ski expedition in New Hampshire to announce his campaign.

While he is a long-shot candidate with little name recognition among voters outside of New Mexico, Johnson remains optimistic that his Libertarian views can help him become the 45th president of the United States.

"I believe the American electorate is reaching a tipping point at which that majority can coalesce behind a candidate who more closely reflects their views," Johnson said. "For many Americans, that view is one of government that is not only smaller in terms of spending, but also in terms of its intrusion into our daily and personal lives." 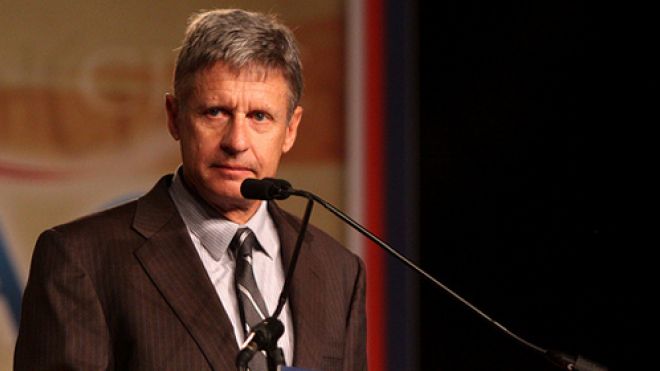 Gary Johnson for President in 2012