Is there such a thing? It would be nice to replace the e-liquid nicotine with THC liquid. My e-cig is a mini vaporizer.
Y

I think I've heard of it, isn't it made in a pharm lab for pills and such ? It should work, if the liquid vaporizes at the right temperature. Usually a vaporizer has a temp. control. I wanna try it. Let's look for the info...
No Left Turn Unstoned :joint:

"what a long strange trip it's been" - our friend, Jerry
R

Hi there ycuzican, yes the vaporizer I have is variable volts. I haven't done any research on the liquid as I have been spending all my time with e-cigs. I have given up cancer sticks and loving my new found hobby of e-cigs.
T

Hi rattman, I'm two weeks without a cig and have a variable voltage e cig with a cardomizer instead of an atomizer. I've been curious to know if there's a way to do this as well, I was wondering if you have made further progress on finding a way.

I make a very strong tincture from honey oil, a couple drops of everclear to thin the honey out just a little, then add veg. glycerin just enough to make it liquid and put in the e-cig cardimizer. you have to warm everything up & stir well for a while for it to blend well
It may take a couple try's to get it right but when you get the knack of it you will be very happy.
I'm on my 2nd cartimizer in 6months. They only hold up so long, but if you have a e-cig store near you it's cheep n easy to just pick up a new one.
I hope this helps
"
I Think,,,,Therefore I am​
"

I saw on another thread that someone had made/bought hash oil that they used in a e-cig.
Should be lots of options on how to do it - I guess more information will become available as more people try it.
You get you a half pint of Hennessy, and you dun it all - you dun it all!
Now you feel, you feel drunk. You got that drunk feelin'
Then you get you a dutch of some greenness and some brownness. And you bun that!
And now you even!
- Son you EVEN!!

Please take a moment to check out my grow

I'll chime in, since we made eliquid out of fresh buds and plant leftovers.

Basically we followed this guide to some extent: Stealth Vaping With DIY Cannabis E-Liquid - Vaporblog: All Things Vaporizer! - Vaporblog

We did use around 5 gram of fresh bud (popcorn buds only, since it was a test), and around 25 gram of grinded up leafes, stems and such which had trichomes on it.

We took our material, put it in a waterbed, and poured around 200 ml PG over it, and heated it so it was barely simmering for about 6 hours. After that we sifted it through cheesecloth several times, and lastly through a coffeefilter, since there was allot of plant rests in the liquid. I think we got a total of about 120+ ml liquid. The liquid is then vaped in an atomizer, like Kanger Pro or Evod, just like any other juice. We added a bit of VG for clouds, and liquorice flavor. You can vape this anywhere without it smelling like weed.

Now, the effect of it is there. We used popcorn buds and leftovers, so we didn't use the most potent material, so we have to vape atleast 10 puffs or so to feel it. If we continue vaping the effect is greater. However, next harvest we're gonna use some better bud, and more of it. It really does work. The liquid is golden brown when finished. 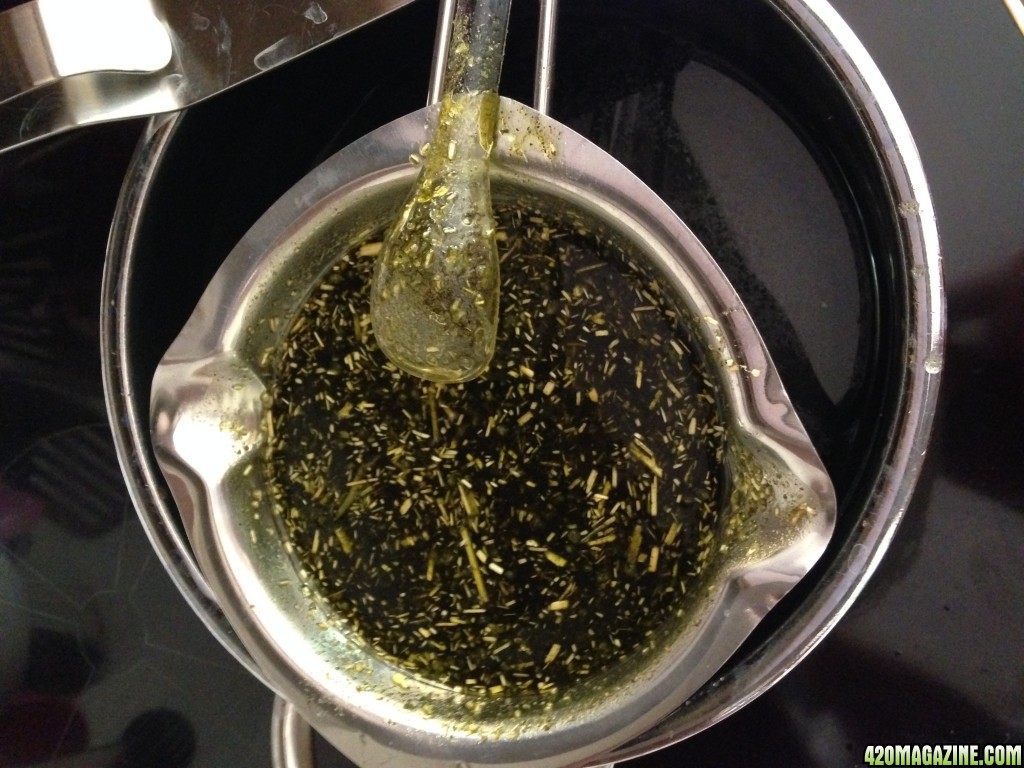 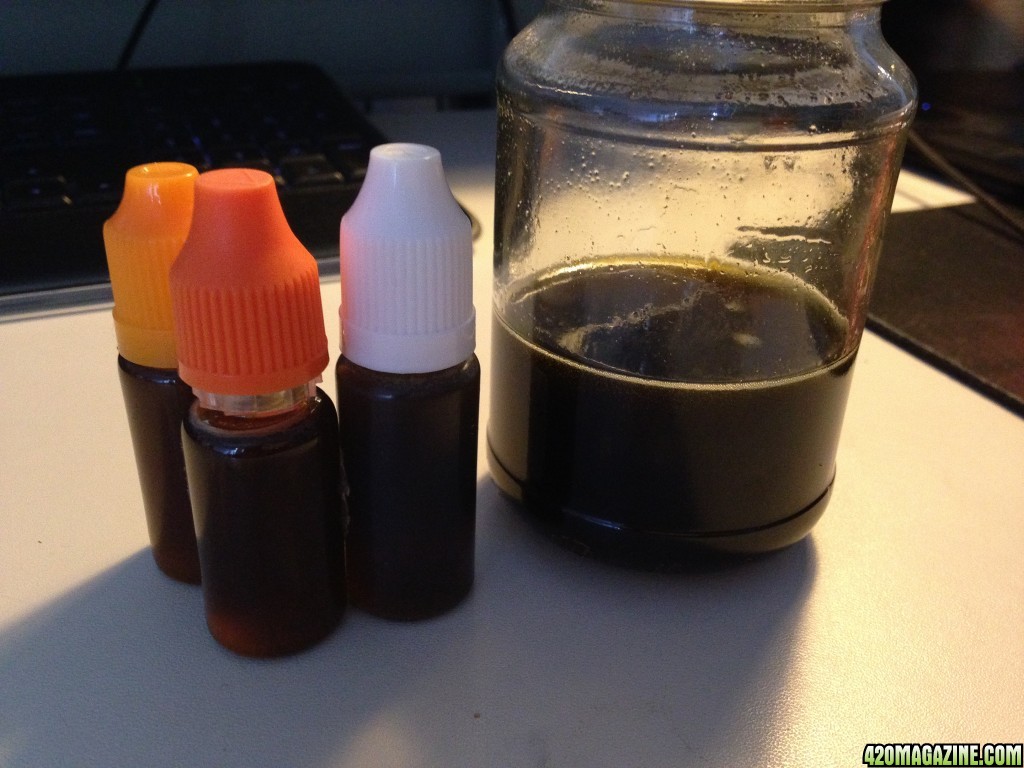 There are many substitute of "e-liquid nicotine with THC liquid" but you have to be sure of the quality thing to choose before apply. When you see that the component of electronic cigarettes is certified and authenticated by a reputed authority and their product mechanism is good for human health you can try them out.
L

I have friends that have smoked the RSO I make and said they have never been higher on just weed. A high THC strain would be recommended and since you plan to smoke it, chlorophyll and other impurities are irrelevant.

What would be a suitable flavor to add to your cannabis juice?

Oil, e-liquid, wax and all the different lingos

4
What’s The Difference Between CBD E-Liquid And CBD Oil?

How can I make e-cig liquid/juice from Glycerin Tincture