Gina Akeo doesn't need a bunch of randomized clinical trials to convince her that marijuana can ease pain and alleviate nausea.

For several years after a 2004 pancreatic surgery gone bad, the 41-year-old Pueblo resident was taking 14 prescription drugs to combat the lingering symptoms of an ordeal that put her in the hospital for three months. She managed to survive septic shock and the removal of part of her intestines, but the pain, nausea and harsh side effects from the medications were too debilitating for her to live with a capital "l."

"I couldn't do anything," Akeo says. "I could barely get out of my bed. I had no life."
Medical marijuana has been her saving grace, she says, restoring her ability to hold a job, to be involved with her family, to feel good again.

"It gives me back a quality of life that, honestly, their pills can't give me," says Akeo, who works at a Colorado Springs dispensary, smokes medical marijuana in the morning and ingests edibles infused with it at night.

But in the highly regulated world of science, medical research and government, the kind of anecdotal evidence that Akeo and many other medical marijuana patients provide isn't enough to prove its salubrity and put it in the same category as Vicodin, Zofran and other federally approved medications.

Only a battery of clinical studies, conducted according to stringent scientific procedures to prove marijuana's medicinal benefits, can persuade lawmakers, much of the medical establishment and government agencies that it belongs in the same toolkit as pharmaceuticals approved by the U.S. Food and Drug Administration.

The problem is, studies are expensive, funding for marijuana studies is scarce and there are obstacles that make it difficult for researchers to get their hands on the federal stash of marijuana specifically grown for research.

For well over a decade, numerous agencies and medical organizations, including the American Medical Association, have called for more clinical studies to build on previous, smaller studies that attempted to gauge how effective marijuana is in combating pain, nausea, spasticity from multiple sclerosis, appetite loss from cancer and HIV/AIDS, and a host of other medical problems.

But long-term, large-scale studies have been scarce, and perhaps the largest research program in the U.S. – operated through the Center for Medicinal Cannabis Research at the University of California at San Diego – recently lost its funding.

"Nobody wants to do studies with marijuana because it's a thankless job," says Dr. Donald Abrams, chief of oncology at San Francisco General Hospital who conducted several studies through the cannabis research center. "People say it's 'Cheech and Chong' medicine, and no drug companies are supporting it because it's not patentable, so what's the point?"

PROMISING RESULTS FOR A HANDFUL OF CONDITIONS

This doesn't mean marijuana and its active ingredients haven't been studied. The International Association for Cannabinoid Medicines' database has compiled more than 300 studies going back to 1970. Some have attempted to calculate which methods of delivery – smoking vs. vaporization, for example – are safer and more effective. Some have looked into the negative side effects of medical marijuana use.

But the bulk have been designed to determine whether the drug or synthetic versions can treat any variety of ailments, from incessant hiccups to cancer.

Many of the studies have found promising results in the use of marijuana for a handful of medical conditions, but the conclusions haven't been unanimous. The website ProCon.org, run by a nonprofit that attempts to provide unbiased educational resources on a variety of issues, tracked down 73 peer-reviewed studies conducted between 2000 and 2011. Of those, 45.2 percent concluded that marijuana has potential medical benefits; 31.51 percent were not clearly pro or con; and 23.29 percent found no benefits and/or detrimental effects, such as cognitive impairment.

Researchers at Leiden University in the Netherlands reviewed 37 controlled clinical studies conducted from 2005 to 2009 in the U.S. and Europe and concluded that "based on the clinical results, cannabinoids present an interesting therapeutic potential mainly as analgesics in chronic neuropathic pain, appetite stimulants in debilitating diseases (cancer and AIDS), as well as in the treatment of multiple sclerosis."

Several of the studies conducted through the 11-year-old Center for Medicinal Cannabis Research in California showed marijuana's promise as an analgesic – something that might back up the anecdotal experiences of Akeo and other patients seeking relief from pain.

"I think the research says that there seems to be an analgesic effect for certain kinds of pain, and there's enough of an effect in a small sample that encourages further research," says Dr. J.H. Atkinson, a physician in the department of psychiatry at UCSD and co-director of the cannabis research center.

One problem is that funding for more research in the U.S., especially for those larger studies, is scarce. The California center's clinical trials were considered Phase 2 trials under FDA protocols, which usually involves a sample size of a few dozen to about 300 participants. Phase 3 trials, the next step in winning FDA approval, can involve up to 3,000 people and are meant, in part, to determine if findings from smaller studies hold up.

As much as center officials would have liked to conduct Phase 3 studies, they ran out of money, and California lawmakers did not re-fund it. That's a pity, its administrators say, because the Phase 2 trials showed great promise for the use of marijuana as medicine.
"The center will continue to exist, but unless new research projects are funded – unlikely in the current economy and political atmosphere – little progress can be expected," the center's director, Dr. Igor Grant, wrote in a San Diego newspaper last fall. "If that happens, opportunities to advance pain science and treatment may be snuffed out."

Atkinson noted that only one of the 16 states with authorized medicinal cannabis use has put up any money for research into its effectiveness.

"It would be up to the states or private monies to fund research," Atkinson says. "I don't see the NIH funding studies."

SCHEDULE I STATUS A HINDRANCE TO RESEARCH

Even if scads of funding were available, research into marijuana's therapeutic value is hampered by its status as a Schedule I drug – those considered to have no proven medicinal benefit and a high potential for abuse. Also on the list: heroin, LSD and Quaaludes.

Because marijuana is a Schedule I drug, researchers have to jump through a lot of governmental hoops to get their hands on the only legal cannabis available for scientific study. The American Medical Association and many researchers, including Atkinson, believe marijuana should at least be considered for Schedule II status, with the likes of cocaine, Oxycodone and morphine, to loosen the reins on its availability for research.

"Our studies would seem to point to the possibility that the drug should be listed as a Schedule II agent, which, by definition, is a drug that may have some benefit and, therefore, would be open to more research," Atkinson says.

In 2006, the FDA came out against the use of smoked marijuana for medical purposes, and issued a statement criticizing states that approved it. The FDA cited marijuana's Schedule I status while, at the same time, indicating the drug needs more testing to determine its safety.

"A past evaluation by several Department of Health and Human Services (HHS) agencies, including the Food and Drug Administration (FDA), Substance Abuse and Mental Health Services Administration (SAMHSA) and National Institute for Drug Abuse (NIDA), concluded that no sound scientific studies supported medical use of marijuana for treatment in the United States, and no animal or human data supported the safety or efficacy of marijuana for general medical use," the FDA said in the statement, its latest on the subject. "

Even if studies confirm and reconfirm marijuana's health benefits to the satisfaction of federal lawmakers and agencies, there may still be questions that need to be answered before it's accepted by mainstream medicine. Among them: What is the most beneficial and safest way to use it? Do synthetics perform as well as the plant? Can the quality, purity and potency be standardized?

In spite of the many unanswered questions about medical marijuana and the call for more studies, 16 states and Washington, D.C., have made it legal, and Coloradans who find relief from it, like Akeo, are just happy they can still buy it.

"I know what works for me, and how much, and I know it's not going to destroy me," Akeo says. "People who really need it don't have to pump themselves full of drugs that we now know have major side effects."

Statistics are as of March 31, the latest data available

Statistics of the registry include:

- Number of patients from Teller County: 1,014, or less than 1 percent of the state total

- Percentage of cardholders who are male: 69

- About 94 percent of patients say they use medical marijuana for severe pain; muscle spasms account for the second-most reported condition at 21 percent. Other conditions include cancer, glaucoma, HIV/AIDS, seizures and severe nausea. Patients can report more than one condition.

- More than 1,100 physicians have signed for patients in Colorado. Eighteen doctors account for 49.3 of the recommendations. One physician authorized 2,381 patients, the most of any doctor. There is no breakdown of the hometowns of the doctors who make recommendations.

WHAT MARIJUANA CAN HELP, ACCORDING TO RESEARCH

Research conducted since 1970 has found that marijuana or its derivatives show some promise in helping the following conditions. But most researchers say more and bigger follow-up studies are needed to validate the findings: 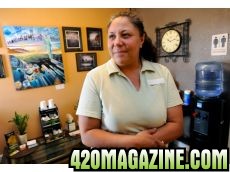