Exposure to moderate levels of cannabis smoke, even over the long-term, is not associated with adverse effects on pulmonary function, according to clinical trial data published Tuesday in the Journal of the American Medical Association (JAMA).

Investigators at the University of California, San Francisco analyzed the association between marijuana exposure and pulmonary function over a 20-year period in a cohort of 5,115 men and women in four US cities.

Predictably, researchers "confirmed the expected reductions in FEV1 (forced expiratory volume in the first second of expiration) and FVC (forced vital capacity)" in tobacco smokers. By contrast, "Marijuana use was associated with higher FEV1 and FVC at the low levels of exposure typical for most marijuana users. With up to 7 joint-years of lifetime exposure (e.g., 1 joint/d for 7 years or 1 joint/wk for 49 years), we found no evidence that increasing exposure to marijuana adversely affects pulmonary function."

They conclude, "Our findings suggest that occasional use of marijuana ... may not be associated with adverse consequences on pulmonary function."

The study's results are consistent with previous findings reporting no significant decrease in pulmonary function associated with moderate cannabis smoke exposure. According to a 2007 literature review conducted by researchers at the Yale University School of Medicine and published in the Archives of Internal Medicine, cannabis smoke exposure is not associated with airflow obstruction (emphysema), as measured by airway hyperreactivity, forced expiratory volume, or other measures.

In 2006, the results of the largest case-controlled study ever to investigate the respiratory effects of marijuana smoking reported that cannabis use was not associated with lung-related cancers, even among subjects who reported smoking more than 22,000 joints over their lifetime.

"We hypothesized that there would be a positive association between marijuana use and lung cancer, and that the association would be more positive with heavier use," the study's lead researcher, Dr. Donald Tashkin of the University of California at Los Angeles stated. What we found instead was no association at all, and even a suggestion of some protective effect" among marijuana smokers who had lower incidences of cancer compared to non-users.

Separate studies of cannabis smoke and pulmonary function have indicated that chronic exposure may be associated with an increased risk of certain respiratory complications, including cough, bronchitis, phlegm. However, the ingestion of cannabis via alternative methods such as edibles, liquid tinctures, or via vaporization -- a process whereby the plant's cannabinoids are heated to the point of vaporization but below the point of combustion -- virtually eliminates consumers' exposure to such unwanted risk factors and has been determined to be a 'safe and effective' method of ingestion in clinical trial settings.

Full text of the study, "Association between marijuana exposure and pulmonary function over 20 years," appears in the Journal of the American Medical Association. 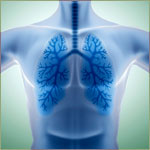 4
Is Smoking Marijuana Bad For Your Lungs?

No Decrease in Pulmonary Function Associated With Long-Term Cannabis Smoking

No Decrease in Pulmonary Function Associated with Long-Term Cannabis Smoking